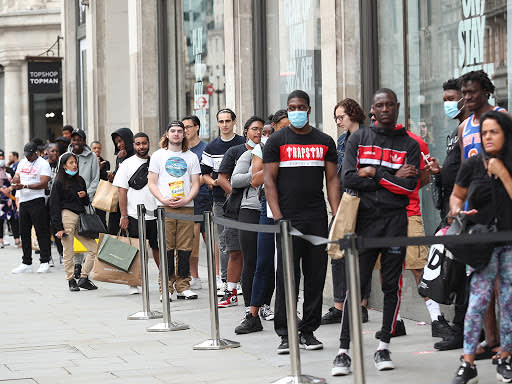 Employment at the heart of Britain’s recovery

In April, unemployment in the UK remained steady month on month at 3.9 per cent. In May, roughly 600,000 fewer Brits were on company payrolls than the previous month. These two starkly contrasting indicators of employment reflect the painfully blurred economic outlook of a country stumbling back to its feet in the wake of an unprecedented shock.

Britain’s labour market is in a state of “suspended animation” thanks to the government’s job retention scheme, according to Samuel Tombs at think-tank Pantheon Macroeconomics. Furloughed staff – 9m of them at the last count – are neither employed nor unemployed and the true impact of coronavirus on the jobs market will only become clear once the scheme is removed.

Still, the fact that employment has remained near its all-time high at 76.4 per cent in a period where the UK’s economic output has fallen 5 per cent year on year, is credit to the furlough scheme. True to its word, the government has protected jobs during the worst of the lockdown, meaning companies have staff on hand to help them reopen as lockdown eases.

But getting back to normal is not simple. Companies are still facing huge rental and debt expenses, while uncertainty regarding revenue generation in the coming months – something that rests uncomfortably on the shoulders of the 1m/2m social distancing rule – means many have been forced to shut up shop.

Indeed, the breadth of industries that have already announced extensive job cuts is stark. HSBC (HSBA) is restarting a redundancy plan that had been paused following the outbreak of coronavirus, and will cut 35,000 jobs over the medium-term, according to an internal memo seen by Reuters. The memo reportedly pointed to falling profits and a difficult economic outlook.

Car manufacturers and engineers, whose tight margins haven’t coped with supply chain disruption, have big staff reduction plans; Rolls Royce (RR), Bentley and Aston Martin Lagonda (AML) among them. Travel companies and airlines, including both of Britain’s low-cost carriers, easyJet (EZJ) and RyanAir (RYA), have had to make almost a third of their workers redundant. Even oil behemoth BP (BP.) hasn’t coped with the disruption; 10,000 members of staff – many of them in middle management – will be made redundant by the end of the year.

And this is just the tip of the iceberg. As doors open and money starts flowing through companies again, redundancy payments are likely to increase. The pubs and restaurant sector, largely absent from the jobs purge so far, is likely to dominate the next round of cuts as the challenges of operating food and drink venues in a post-coronavirus world become clearer. For now, companies are heavily lobbying the government to reduce its social distancing rule to 1m as this will allow most venues to operate at almost full capacity. At 2m of social distancing, hospitality companies will struggle to make money. It is hardly worth them re-opening.

Even more important than the 1m or 2m rule is a public willingness to go out and spend money. The queues outside Primark as non-essential retailers opened their doors for the first time on Monday suggest the nation is hungry for spending. By 5pm on the day, research firm Springboard said footfall was nearly 40 per cent higher than last week.

But a surge in footfall does not necessarily translate into higher expenditure. Diane Wehrle from Springboard thinks that the rush to shops is more reflective of a nation desperate to do something new, than one feeling flush with cash. “It’s not about buying stuff,” she told the BBC, “it’s about having the opportunity to have a normal life again.”

The queues certainly don’t tell the full story. Under current social distancing rules, shops are operating at 30 per cent capacity, meaning footfall on Monday – while up week on week – was still 40 per cent lower than it was this time last year. And with virus nervousness still rife, footfall and spending isn’t expected to return to previous levels any time soon.

Meanwhile, with unemployment balancing on a knife edge, the nation is hardly in a position to splurge. The health of the jobs market is at the heart of a continuous spiral that has the capacity to either alleviate or exacerbate the UK’s economic crisis. Low jobs means little public optimism. And without optimism, a willingness to spend and an ability to pay taxes, the UK is going to struggle to lift itself out of its current debt hole.

It’s not all doom and gloom. Amid the carnage, some companies have resolved to find new ways of working and delivering goods. Convenience stores and local high streets have seen a big uptick in footfall, according to Springboard data. Meanwhile, the purge of the high street and hospitality sector will leave space for well-run companies to expand. Greggs (GRG), Young's & Co (YNGA) and Games Workshop (GAW) have all reported sensible reopening plans and demonstrated decent resilience in the past few months. The latter has fared so much better than expected, it’s giving back its furlough payments.

But with the full weight of coronavirus yet to be revealed in jobs data and a new wave starting to emerge in Beijing, now is not the time for blind optimism. Britain’s post-coronavirus policy is crucial. One mis-step could leave the UK with one of the slowest economic recoveries in Europe, as well as its highest death toll.