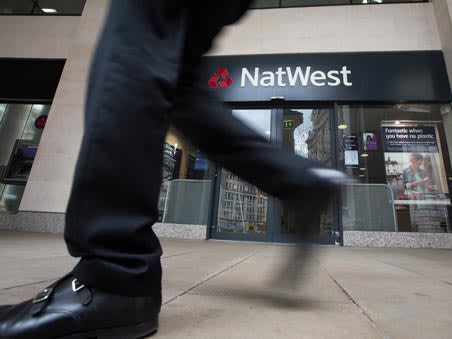 Continuing the trend across listed banks’ earnings season, third-quarter results for NatWest (NWG) showed big falls in expected credit losses, rising customer deposits and an unwinding of mortgage payment holidays. As with Barclays, HSBC and Lloyds, the market reaction was jubilant, with the shares rising 6 per cent.

The most marked difference with high street peers was on capital. A £7.6bn reduction in risk-weighted assets – principally within NatWest Markets, the group’s investment banking arm – caused the group-wide common equity tier one (CET1) ratio to rise 100 basis points to 18.2 per cent in just three months.

Against a medium to long term target of 13 to 14 per cent – itself well above the regulatory minimum – that means surplus capital has grown to as much as £9bn, equivalent to 60 per cent of the bank’s market value.

This carries two implications for investors. The first is that despite “continued significant economic uncertainty” – a moderation from the “significant uncertainty” of the first quarter and the “increased uncertainty” at the half-year – capital is now strong enough for chief executive Alison Rose to declare her company “safe and secure”.

Second, while Ms Rose’s tone was softer than her counterparts at HSBC, she has not forgotten shareholders, to whom she intends to return capital. The Prudential Regulation Authority, which put the kibosh on dividends and buybacks at the end of March, has promised to review its guidance on distributions before the end of the year.

Even if income seekers’ hopes are dashed, it seems management expects capital levels will only build from here. Further reductions to risk-weighted assets are expected, and while property-related charges and job cuts mean “strategic costs” of up to £1bn this year, the result should be a £250m drop in annual costs.

On top of this, the full-year impairment charge is now likely to come in at the lower end of a £3.5bn to £4.5bn range. Here, as with Lloyds, the change in outlook has been subtle. With Nationwide’s latest House Price Index pointing to a 5.8 per cent rise in house prices in the 12 months to October, half-year "downside" modelling of a double-digit fall this year now look wide of the mark.

Rather than reverse first-half provisions booked against the mortgage book, NatWest is happier to adopt a cautious approach, with finance director Katie Murray going as far as suggesting a red-hot housing market may have only led to “temporary increases” in prices.

That seems prudent. Like Virgin Money (VMUK), we think investors can take increasing levels of comfort from the group’s capital strength. Though too much remains up in the air right now – from negative rates to a second lockdown and Brexit – NatWest could yet emerge from the chaos of 2020 as a utility-like play. Hold at 124p.