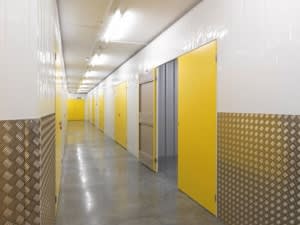 The acceleration in ecommerce and shift to working from home induced by the pandemic, combined with a shortage in flexible warehouse space in London, pushed occupancy higher for Big Yellow (BYG) during the first half. There was also a sharp rebound in domestic move-ins from August thanks to a surge in housing market activity.

As the occupancy rate in its like-for-like portfolio approaches 90 per cent – sitting at just over 87 per cent at the end of September – that is also giving the self-storage specialist greater pricing power, management said. Average achieved net rent per square/foot was 2.2 per cent higher. However, a lower revaluation boost to the portfolio depressed earnings and meant a marginally reduced dividend was recommended.

Three new London stores have been opened so far this financial year, with Camberwell at 24 per cent occupancy after four months of trading and Bracknell at 16 cent after two months. Contracts have also been exchanged for an additional site in Wapping, taking the development pipeline to 11 sites, equivalent in size to 16 per cent of the current maximum lettable area of the group's portfolio. Expansion plans are backed by an impressive interest cover multiple – cash generated from operations (pre-working capital movements) against interest paid – of almost 10, versus an internal minimum target of five.

The shares have enjoyed substantially all the ground lost in the March crash and at a hefty premium to forecast net asset value (NAV), price in substantial growth in the portfolio. Big Yellow’s track record for increasing occupancy and rental income is solid, but a potential downturn in the housing market and challenges to business confidence cannot be ignored. Hold.

Panmure Gordon forecasts an adjusted NAV of 792p at the end of March 2021, rising to 838p the same time the following year.