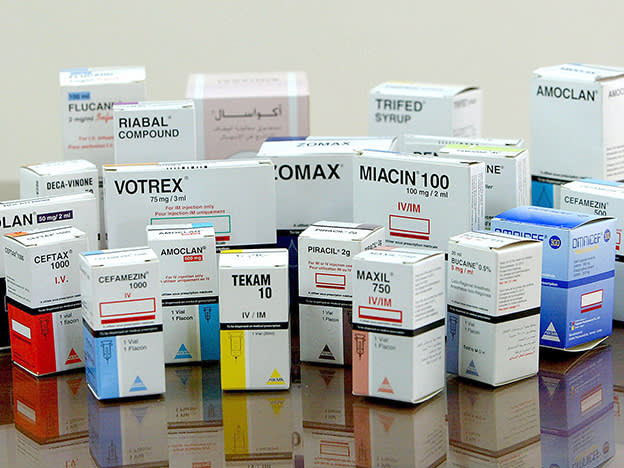 Hikma is far from generic

The world is sprouting more grey hairs. Indeed, a report last year from the United Nations (UN) estimated that the proportion of people aged 65-plus would almost double to 16 per cent by 2050. The octogenarian camp could triple in size.

Such demographic trends are contributing to a greater prevalence of chronic illness, and underscores the need for affordable and reliable access to healthcare. The pandemic this year has thrown these issues into even starker relief, highlighting the advantages of secure, in-country medical supply chains. Little wonder, perhaps, that Donald Trump signed an executive order in August to boost domestic production of essential therapies. While critics will say this was electioneering, such action is rooted in real data; there are currently 119 known drug shortages across the US.

Against this evolving backdrop, Hikma Pharmaceuticals (HIK) – a leading multinational provider of generic medicines – looks increasingly well-positioned. Generics contain the same ingredients as branded drugs, and can enter production when the exclusive patents on drugs expire. They are particularly useful in times like these, because they are typically much cheaper than their brand-name equivalents and can help to fill supply gaps quickly.

Research firm EvaluatePharma projects that global sales of generic medicines will reach $101bn (£77bn) by the year 2026, up from $70bn in 2019. But that estimate could, feasibly, prove conservative if the next Washington administration – or other foreign governments – introduce stricter rules around drug pricing and expiration dates on company patents.

Hikma has been at the forefront of the battle against coronavirus. At the peak of lockdown in March and April, it was supplying the US market with 11 out of the 13 most used injectable therapeutics for patients on ventilators. It has also signed a non-exclusive supply deal with Gilead (US:GILD), a biotech company that has received Emergency Use Authorisation in America to treat severe virus cases with its Remdesivir drug.

The crisis has bolstered Hikma’s short-term trading performance – taking half-year revenues up by 8 per cent to $1.1bn. But the group has also continued to make strategic investments in its product pipeline – setting itself up for future revenue growth, strengthening its competitive advantage and, in turn, reinforcing its historically high margins.

As reflected by Hikma's frequent appearance in this magazine’s Ideas Farm, the combination of those factors has prompted broker upgrades and lifted Hikma’s share price by more than a third since January – a far cry from the 20 per cent decline endured by the FTSE 100 over the same period. And, there’s plenty to suggest that further reratings may follow.

Founded in Jordan in 1978, Hikma is now the manufacturer and marketer of a broad range of generic pharmaceuticals. It operates in more than 50 countries, with 31 manufacturing plants and seven research and development (R&D) centres. It derives 61 per cent of sales from the US, a third from the Middle East and North Africa (Mena) and the remaining 6 per cent from Europe and the rest of the world.

Hikma's largest segment by product type is injectables, which generates two-fifths of the group’s organic revenues. It sells its products to hospitals, largely in the US. The next business, generics, makes up a third of sales and supplies oral and non-injectable generic medicines to the US retail market. The smallest division, branded, comprises patented products that Hikma licenses and sells into the retail and hospital markets in Mena.

At the same time, Hikma boasts strong market positions in each of its geographies, buoyed by quality manufacturing, scale and expertise – not to mention its successful integration into highly regulated markets.

Hikma is the third-largest generic injectables manufacturer in the US, and one of the country’s top 10 generics suppliers overall – helped by its $2.7bn acquisition of Ohio-based Roxane Laboratories in 2016. Having such a foothold in the States has been key to the group’s flexible supply of drugs during the current health crisis, adapting to changing medical needs.

Meanwhile, in Mena, Hikma is known as a ‘partner of choice’. And while some parts of this region have restricted the import of products where domestic manufacturers are available, the group has judiciously invested in local manufacturing sites. On the back of solid revenues, all of these factors have allowed Hikma to enjoy a consistently high gross margin of around 50 per cent over the past four years.

But Hikma isn’t resting on any laurels. Just as the group has broken down the barriers to entry on patented drugs, so too is it vulnerable to disruption. Where one generic crops up, more will follow. This phenomenon affected Hikma badly in 2017, when the US Food and Drug Administration (FDA) picked up the pace on ‘Abbreviated New Drug Application’ (ANDA) approvals – allowing more treatments to reach the market. This led to price erosion for Hikma’s products, knocking full-year revenues and triggering an impairment charge.

With that in mind, Hikma is continuing to invest for the future – spending the equivalent of 6-7 per cent of revenue on research and development (R&D), in the hope that a tenth of sales will stem from new launches by 2023.

Specifically, the group aims to build up a pipeline of complex generic medicines. As chief executive Siggi Olafsson told analysts at the 2020 half-year mark, “the more complex products you have, the fewer competitors you have in the market”. At the last count, Hikma had made four regulatory filings for complex injectables in the US. And in a sign of potential fillips or ‘shots in the arm’ further down the line, it had a further 15 in development.

In recent weeks, the group received a favourable court ruling on its generic version of the heart drug Vascepa, which broker Stifel believes could add $133m in sales in 2021. And while its generic version of GlaxoSmithKline’s (GSK) Advair inhaler has endured a further regulatory setback in the US, analysts seem confident that approval will occur next spring.

Hikma’s expenditure is underpinned by strong operating-cash flow. This was up by more than a half to $292m for the first six months of 2020. And signs that such investments are worth making can be found in an operating margin of 22 per cent last year which led the group to boast a healthy return on capital employed (ROCE) – operating profit from every dollar invested in operations business – of 19 per cent.

Net debt has come down every year since 2016. But one red flag to watch is the group’s high debtors-to-revenues ratio – routinely exceeding 30 per cent, reflecting the longer payment terms typical with Mena customers – although US customers make up the lion’s share of trade receivables. Still, Hikma says it has protected itself with credit policies and “certain credit insurance agreements”.

The group may ride the crest of the second Covid-19 wave and see ongoing demand for its emergency medicines – albeit further delays to elective surgeries could prove disruptive. But virus aside, Hikma’s pipeline investment and focus on margin protection make us positive, as do favourable demographic shifts. A small forward dividend yield of 1.4 per cent adds a spoonful of sugar to Hikma’s already appealing medicine, as, in light of the growth potential, does a forward price/earnings multiple of 21 times for 2020, dropping to 18 times for 2021.