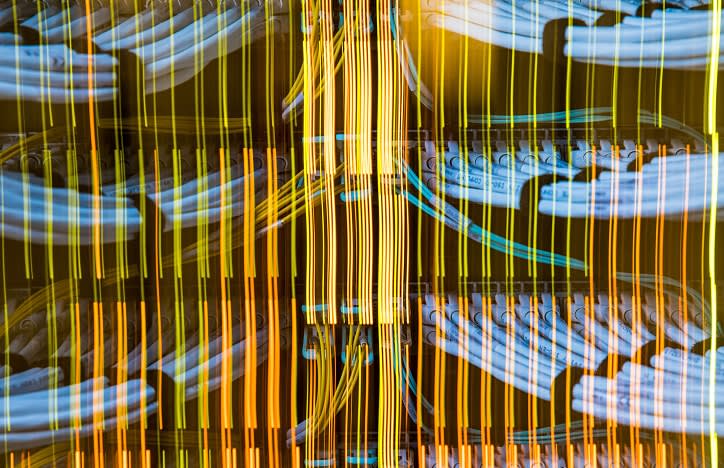 One of the most striking investment trust developments of last year saw the first two trusts dedicated to the infrastructure of the digital economy raise enormous sums. Cordiant Digital Infrastructure (CORD) and Digital 9 infrastructure (DGI9), which both listed in the first quarter of 2021, already have combined assets of more than £1.5bn.

Both trusts have kicked off the year by announcing further share placings. Cordiant, the smaller of the two, has made a commitment to buy two assets – a multi-asset digital infrastructure business based in Warsaw and a data centre in New York. Digital 9, meanwhile, is hoping to raise £200m and has agreed to buy a wireless network operator in Ireland. While the issues are not open to private investors, they have led to a narrowing of the trusts' premia to net asset value (NAV). Given the promising start and the attractive returns both trusts are targeting, is it time to consider investing?

There are three main types of asset these trusts look to own: data centres (renting out space to internet providers and big tech companies), telecommunications towers (renting to mobile phone companies and TV broadcast networks) and fibre-optic networks (users include telecommunications operators, internet service providers and connecting to home companies) in the UK and internationally. The trusts operate a 'buy and build' strategy, and are closely involved with the management of the assets and look to add capacity to them. For example, the New York data centre Cordiant recently acquired is currently underutilised with scope to ramp up capacity, says Mick Gilligan, head of managed portfolio services at Killik and Co.

He adds that both trusts operate in the mid-market (the unlisted equivalent of mid-cap stocks) and transactions in this part of the market are currently taking place at much lower valuations than those involving the very largest players. This gives the trusts an incentive to build out the businesses they acquire and achieve higher exit multiples.

David Merriam, associate director at Tilney Smith & Williamson, says digital infrastructure assets tend to have “reasonably long” contracts, perhaps of five to 10 years. They also have high renewal rates, with mobile phone providers likely to continue with the same mobile towers, for example. The contracts also tend to have rent reviews with a degree of inflation linkage or an upward-only rent reviews, which might be particularly appealing in the current environment.

Merriam adds that the trusts’ managements work closely with the teams running the underlying assets as they look to improve and grow the assets, complete technological upgrades and work with new customers and tenants. “The asset management opportunity to drive capital growth of NAV is quite significant in this sector,” he says.

The difference between the two

The trusts look to invest in pretty similar assets. They also have similar total return targets of 9 to 10 per cent and they both launched in the first quarter of last year. They trade on the Specialist Fund Segment of the London Stock Exchange, which is accessible to private investors via most major platforms.

Cordiant’s announcement earlier this month means it will be fully invested when the transactions complete, with a total of three assets. Its inaugural investment was CRA, an operator of national digital networks in the Czech Republic, which include 660 mobile and broadcast towers, six large data centres and some fibre-to-the-home.

Digital 9's commitment commitment to buy Tetra Ireland, announced on 13 January, means it has now deployed or committed all of its available capital, according to the trust's board. The portfolio currently owns three assets: two sub-sea cable systems connecting Europe to India via Egypt and a Nordic data centre that operates entirely by renewable power.

Digital 9 is targeting a 6p dividend whereas Cordiant’s target is 4p. Cordiant intends to pay a 4p dividend per ordinary share for its second financial year starting on 1 April 2022, three years earlier than planned. Digital 9 paid a dividend of 1.5p for the period 'between 31 March and 30 June 2021 and appears on track to pay an annualised dividend of 6p. Cordiant anticipates greater capital growth than Digital 9.

Cordiant's investment manager will charge 1 per cent of the trust's average market capitalisation up to £500m, 0.9 per cent between this and £1bn, and 0.8 per cent above that threshold. The manager can also charge a performance fee of 12.5 per cent of any excess return above its 9 per cent return target (the lower of the NAV or share price measure) over the calculation period. The first performance fee calculation date is 31 March 2024, with a calculation due on the same date each year thereafter.

It is likely that digital infrastructure assets will continue to grow rapidly. As Digital 9’s website puts it: “Even before the pandemic, the growth rate of internet traffic was predicted to increase on average by 30 per cent every year.” The rollout of 5G should significantly expand the need for data in mobile assets: while still in its early stages, 5G is expected to be used by 11 per cent of mobiles – 1.4bn devices – by 2023, according to Cisco's annual internet report.

Not only should digital infrastructure see a surge in demand for assets, asset managers have the opportunity to improve the quality of the assets and investors could benefit from contracts with built-in price escalators linked to the inflation rate. However, this is partly offset by any rise in the cost of materials for maintenance and wages. Electricity prices are important to users of data centres, but these contracts are often structured as a pass-through, meaning that any increase in electricity prices is borne by the customer.

Merriam also notes that the assets such as fibre networks, mobile towers and data centres, take a long time to develop and are quite scarce. If managers own strategically well positioned assets they should remain attractive for a reasonably long time.

The digital infrastructure trusts are very concentrated with large assets, meaning any problems for individual holdings could have a large impact. Neale says a “key risk” for digital infrastructure is the possibility of a new technology that might reduce the need for existing fibre and data centres but he believes new technologies will likely be used together with existing technology.

Perhaps a more pressing risk is valuation. As it’s still early days for the asset class it’s hard to get a feel for comparative transaction multiples and what people are paying for similar assets. Increased interest in the sector is leading to more competition and rising valuations.

Digital 9 has not yet disclosed all transaction values. Cordiant has indicated that the cost of its portfolio so far is less than 12 times earnings before interest, taxes, depreciation and amortisation (Ebitda). “This is a reasonably attractive level given the quality of the assets it has acquired,” Gilligan says. However, he adds that neither trust has produced a set of full-year numbers yet so there is no real visibility on the discount rate they are using to value their portfolio assets.

Cordiant has shown some caution on valuations by pulling out of deals where its managers thought the price was too high last year. “We like to see that level of capital discipline,” Merriam says, but it does leave a longer time for the capital to be put to work.

However, this leads to the issue of cash drag. The due diligence needed to complete transactions that can be worth hundreds of millions of pounds takes several months, resulting in periods when there is a lack of return on any cash balances from capital raises yet to be deployed and fees can still be incurred. Gilligan notes that before Cordiant’s announcement this month, for example, 46 per cent of the capital raised since its initial public offering was still sitting in cash.

He adds that there is an element of foreign exchange risk where revenues are being earned in currencies other than sterling. There is also potentially regulatory risk if governments decide to legislate a price control framework for digital infrastructure services at an unfavourable price.

“3i has a really strong management team and a very good feel for valuation and where a sector is moving,” Merriam says.

Pantheon Infrastructure (PINT), which listed on the London Stock Exchange in November 2021, is also eyeing digital assets. While the trust is yet to deploy capital, its prospectus says that it is targeting 20 to 35 per cent investment in digital assets. This and power and utilities are its largest sector allocation targets.