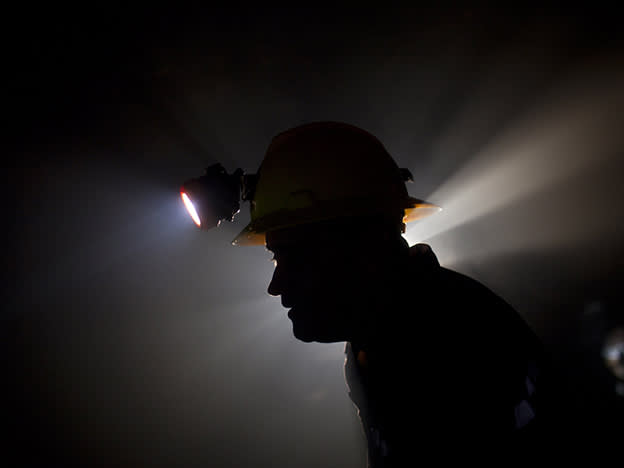 Explorers love to shout about results of drilling campaigns, but often they are mere short-term sugar hits for share prices. Reading numbers correctly can be easier said than done.

But they can be a foreign language for generalist shareholders. What does 100 grams per tonne (g/t) of gold mean when it is across 0.1 metres versus 1 metre? Should you be worried if someone accuses your favourite gold explorer of just drilling right down the vein? We’ll come to those specific points, but to put it clearly: drill results are hugely important for junior miners, and understanding them is crucial for investors.

Investors’ Chronicle small-cap expert Simon Thompson notes that positive drill results “materially mitigate the investment risk” and can narrow the valuation gap between a junior miner’s market capitalisation and the estimated net present value (NPV) – the sum of the estimated cash from future output valued in today’s money – of the mine it is developing. “Drilling results can be a real game changer in this regard,” he adds.

“The whole idea with everything you do in exploration is to generate drill targets to test your geological concepts,” says Joe Mazumdar, a geologist and mining analyst who runs the highly regarded Exploration Insights website. Drilling is what gives investors “your proverbial 10-baggers”, he adds, referring to companies whose share prices climb by a factor of 10.

The typical process for an explorer is to find a prospect – potentially through previous exploration in the area, or just spotting where potential may lie – and then use techniques such as soil sampling, surface geochemistry, or even an airborne geophysical survey, which involves flying a helicopter with an electromagnetic loop underneath it that can pick up on metals underground. This work should then generate theories about what lies beneath.

Companies will then usually raise cash from investors to begin a drill campaign. A recent announcement on this front came from Beowulf Mining (BEM), which is planning to spend £1mn on a 3,400-metre programme across both a gold prospect and a zinc-lead-silver prospect in Kosovo this year. “We are optimistic that the [induced polarisation] anomalies represent high-grade portions of the mineralised systems we believe are present,” says chief executive Kurt Budge. This means the company will use previous above-ground work (induced polarisation is the process used to develop a picture of where metals are underground) to work out where to point the drill rig.

If the results are favourable, the company will develop a working model of the mineralisation (the spread of metal through the rock), and come up with a maiden resource, which is the first estimate of how much copper, gold, lithium, or similar, lies within the orebody. There can be years between target identification and this point, and then years again before construction starts on a mine. But the biggest share price gains come after strong drill results and potentially around the time when the maiden resource is announced. Shares then often fall back when the company has to actually finance a mine.

The drill campaign itself is usually defined in terms of total length, which is 3,400 metres in Beowulf’s case. This means 3,400 metres of drill core (cylinders of ore, or rock, which are the width of a Coke can) are removed from the ground using a drill rig. These cylinders, called core samples, are then cut in half, with one half taken to a lab and analysed (at which point they are called assays) for metal content, and the other stored.

Tell me about it

Next comes the promotion. Stock exchange releases are littered with these terms as companies announce ‘significant’ gold intersections or mineralisation.

Aim-traded explorer Lexington Gold (LEX) would have been hoping to make a splash last week with one hole at the Loflin project in the US, which gave 36 metres at 1.67 grams per tonne (g/t) of gold. “[These] assay results confirm a significant new discovery,” the company said.

Explorers are keen to show off just how much gold, or silver, or lead they have found. What investors see is the very best of what the drill campaign had to offer, presented using averages across different segments from across the core.

“The most important aspects of drill results is showing good grade thickness and continuity,” says Mazumdar.

Gold exploration numbers can be difficult to parse for non-experts given the nature of the mineralisation: a site might only have one vein, but if an explorer hits that vein it can announce an extremely positive drill result ('bonanza-grade' is the term often used to refer to the highest grade of gold grams per tonne) that bears little relation to a working mine in a few years. Thus the idea of a company trying to drill down the vein in order to present extremely high gram-per-tonne numbers to the market.

Christopher Ecclestone, a mining and metals strategist at Hallgarten and Company, says details like how far holes are spaced apart are also very important. "If it's five drill holes 500 metres apart, it's informative but useless towards drilling a resource," he says.

Drill results will likely have higher grades than the resource the company later produces, and they form the basis of a plan to mine the deposit. A good rule of thumb is underground gold mines need high single-digit-plus grades (grams per tonne), while an openpit gold operation like Centamin’s (CEY) Sukari mine will have a low single-digit grams per tonne.

A copper mine will have its grade measured in percentage terms, with 0.5-3 per cent the norm. Atalaya Mining (ATYM) announced a 129-metre hole with a 1.19 per cent copper grade in February, highlighting segments with double that grade over 15 metres and 12 metres. The length indicates the mineralisation is widely spread, although higher-grade zones still form a fifth of the total length. Atalaya was drilling within a known deposit, however, so positive results aren’t going to blow up its share price.

This exploration is being done to better understand an expansion option 28km from its existing mine, so it is very different from an undercapitalised junior miner betting the house on a drill hole.

Knowing the context is key, says Mazumdar. He said mineability (is the deposit near to the surface or in stable rock?), metallurgical recovery and the actual location of the site are all key questions for the long-term investor. “Not a lot of retail investors take that into account,” he says.

Ecclestone echoes this point, saying that good numbers for an openpit mine 500 metres below ground mean a massively expensive development given the amount of rock that has to be shifted even before mining begins. "People are starting to move away from openpit," he says, citing the long-term environmental impacts of digging a pit that could span 1km ore or more across.

But the flipside is that share prices might move despite these realities, given the willingness of investors to bid up a junior when a catalyst comes along.

AEX Gold (AEXG), which is trying to reopen an underground mine in Greenland, has had plenty of big numbers to shout about but those are less meaningful given the work needed to get the Nalunaq mine into shape. Its shares cratered just over a year ago on the news the mine had serious safety issues and the restart of production would not happen by this year as previously forecast. Pure Gold (PUR), another Toronto Stock Exchange company with a secondary listing in London, has been able to report 21.1 g/t over four metres in its Ontario underground mine but could soon run out of cash after operating conditions proved far tougher than anticipated.

These examples show the trader/investor split. Traders can generate plenty of returns just by picking out drill results that will be popular with the market, while often very loyal investors will see early promise from promising exploration programmes turn sour as the realities of mining kick in.

The reality is that even longer-term investors need to be mindful of these dynamics. As Mazumdar concludes: “I would advocate that you take advantage of any significant share price increase related to the release of a good hole and take some money off the table before the next holes come, especially in the gold market, because gold is something that's more variable."