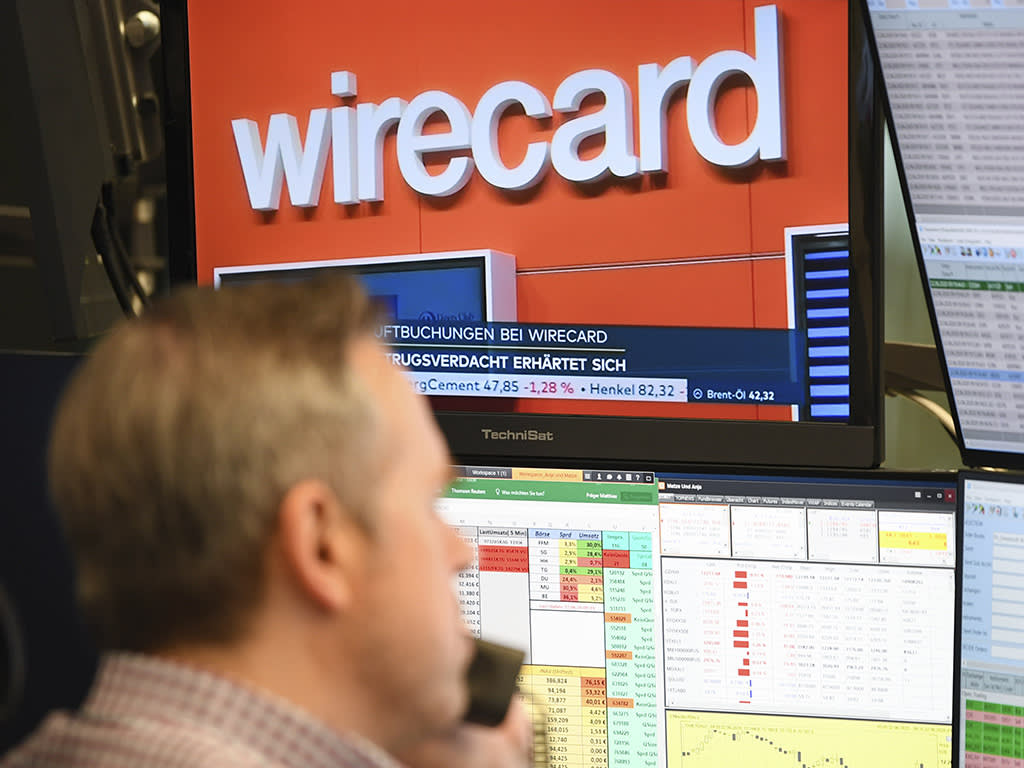 The Wirecard scandal: what went wrong?

In less than a fortnight, Wirecard (Ger:WDI) has gone from one of Europe’s most hyped financial technology firms to insolvency, all-but extinguishing the value of a company that was worth almost €20bn (£18bn) as recently as April.

After years of rising suspicion, dogged investigative reporting and growing short interest, it was the company’s own admission on 18 June that auditors could not locate €1.9bn of cash which sounded the death knell. Already, comparisons have been drawn with Enron, the energy group and one-time stock market darling whose systematic fraud and corruption rocked the US business establishment when it was uncovered in 2001.

For investors in 2020, the Wirecard scandal opens a vault of questions, chief among them concerning the integrity of market regulation and corporate audit process.

First, it is worth retracing the history of a company that until recently was relatively unknown in the business world. Founded at the tail-end of the dotcom boom in 1999, Wirecard initially specialised in managing payments for gambling and pornography websites, but later pivoted into banking and rebranded as a payments processor after it joined the Frankfurt stock market in 2005. A key part of everyday digital transactions, payments processors act as intermediaries between customers and merchants, using technology to manage transactions on behalf of issuing banks.

Before it failed to locate its own cash this month, Wirecard was a champion of the transition to a cashless economy, and projected stratospheric growth in the demand for its services as consumers increasingly switch to smart payments devices and online shopping.

The story was warmly received by investors. In the decade to September 2018, Wirecard’s share price rose more than 30-fold as its sailed into Germany’s DAX 30 blue-chip index. Headed by a charismatic and black turtleneck-clad chief executive Markus Braun, the company was held up as a rare example of a corporate tech success story in a country better known for heavy industry and manufacturing. Prominent investors including Alexander Darwall, the former Jupiter Fund Management stock-picker who set up on his own last year, gave credence to the quality of the firm’s growth.

However, the house of cards began to teeter at the beginning of 2019, when an investigation by the Financial Times found that an executive in Wirecard’s Asia-Pacific division had been suspected of using forged contracts. So began the newspaper’s gradual unmasking of an apparent large-scale fraud, during which time a team of journalists led by former Investors Chronicle writer Dan McCrum found evidence of inflated profits and dubious outsourcing arrangements – all the while facing legal threats from the company and a criminal probe from BaFin, Germany’s financial regulator.

With a couple of notable exceptions, the investigations were either overlooked or dismissed by company analysts (see chart). In one particularly egregious instance, Commerzbank’s Heike Pauls accused the Financial Times of “fake news” in a 2019 report to clients. Though the note was subsequently retracted, the reproach echoed the idea that the reports were part of a conspiracy with hedge funds to profit from a fall in Wirecard’s share price.

It is now clear that bearish hedge funds were right, and that allegations of collusion served as a smokescreen by the company to distract from critical media reports.

“Once again short sellers have played the unpopular role of market vigilante in unmasking a deceit,” argues Barry Norris, whose firm Argonaut Capital was one of those betting that Wirecard’s stock would fall. “It is time to recognise that without short sellers we would inevitably have a more dishonest stock market and that would lead to a higher cost of capital and lower long-term economic growth.”

If short-sellers have again been vindicated, what does this mean for those who backed the company, or provided the veneer of legitimacy?

“I don’t think it represents a bigger malaise in the fund industry,” says Peter Toogood, the chief investment officer of retirement solutions business Embark Group. “Managers simply don’t look for fraud per se. But fraud is fraud. The audit process is a 'checking for 1-in-a-100 or 1-in-a-1000' game, and – hey, things get missed – and here, someone was fraudulent.”

However, reports that accountants Ernst & Young failed to properly verify Wirecard’s bank statements for three years have again thrown into doubt the reliance investors can place in the audit process, regardless of the sophistication of a fraud.

“Audit standards exculpate them from liability in most of these situations, because they’re supposed to assume that management’s telling the truth, that the accounts are genuine, and that the documents they’re given are genuine,” says Mr Block. “An auditor has to be really, really negligent in order to be professionally liable.”

Auditors aren’t the only financial market supervisors thrust into the dock. For some, Wirecard’s collapse is especially unnerving because it happened in Germany, a country with a reputation for strong safeguards against corporate malpractice and fraud.

“Generally, stakeholder capitalism is considered to go alongside a very strong regulatory framework and a long-term approach to business,” says Professor Kenneth Amaeshi, chair in business and sustainable development at University of Edinburgh. “Of the methods of organising the economy and policing corporate ethics it is the system thought least likely to fail in preventing the kind of activities Wirecard was engaging in.”

Critics of Germany’s regulatory regime argue that a consensual model of market oversight means it is not fit for purpose. That view has been given extra weight by a request from the EU’s head of financial services policy to investigate BaFin’s handling of the Wirecard scandal.

“BaFin has just been atrocious, and not just on Wirecard,” says Mr Block. “Every single public critic of a public company in recent years has been put under criminal investigation in Germany. I look at BaFin as Wirecard’s most powerful accomplice imaginable.”

Blinded by the lights

Finally, there is the matter of corporate governance, and how high-flying, fast-growth stocks seem to perpetually breed an apathy within financial markets. In retrospect, the adage “if it looks too good to be true, it probably is” looks appropriate in the case of Wirecard.

“What Wirecard shows is that transparency and governance process have to scale in tandem with rapid business growth,” says Martin Davis, chief executive of Draper Esprit (GROW), a tech-focused listed venture capital firm. “It’s a warning signal that we should pay attention to.”

The saga will also raise scrutiny of the methodologies many funds and investors use to determine a company’s governance ‘score’. The Swiss ESG research provider RepRisk initially flagged the company as a medium risk in 2016 before upgrading it to a high risk in March 2019, though Wirecard had median ESG ratings from data providers including MSCI and Sustainalytics prior its collapse. This appeared enough to land the shares a spot on ESG-themed exchanged traded funds run by BlackRock and Vanguard.

This article was amended to clarify RepRisk's re-categorisation of Wirecard's ESG score in 2019.

To some, Wirecard can be dismissed as a one-off fraud or a specific failure of Germany’s consensual model of capitalism. But the saga has nonetheless highlighted major vulnerabilities in the fast-growing financial technology sector, which for several years has been one of the most attractive destinations for investor capital.

That was thrown into sharp relief this week when a raft of card issuers – including listed firms Equals Group (EQLS) and Morses Club (MCL) – were ensnared by the Financial Conduct Authority’s (FCA) decision to place restrictions on the German group’s UK-registered arm.

Last Friday, the regulator told Wirecard Card Solutions – which provides payment services including the issuance of e-money onto prepaid cards for UK businesses and customers – that it could not dispose of any assets or funds or continue with regulated activities. This followed the German group filing for insolvency, which led to fears at the watchdog that UK consumers’ safeguarded accounts might be vulnerable.

This resulted in thousands of businesses and customers unable to use cards or access funds locked in accounts that run on Wirecard’s payments technology, in a major blow to the reputations and reliability of several fast-growing fintechs.

Mobile business payment application ANNA Money, whose cards work on Wirecard technology, found itself urging its customers to withdraw money from their accounts “as soon as possible”, though one business client confirmed to the Investors Chronicle he was unable to access his cash.  High profile digital-only banks Monzo and Starling, who count several million customers between them, had to assure concerned customers that they no longer use Wirecard’s services.

By Monday night, the FCA had reinstated WCS’ ability to manage its electronic money and payment services, meaning its customers can now use their cards as usual.

But the regulator’s handling of the episode drew some criticism from the affected firms, with one company saying it had been “absolutely dismayed by the lack of contact”.

“It really is a mess, partly of the FCA’s own making,” added Equals chief executive Ian Strafford-Taylor, prior to the lifting of the restrictions. “We received no prior notice. I think they were spooked by the insolvency of the parent, and worried that they could suck client funds out of the UK subsidiary.”

Equals, whose subsidiary Fairfx issues prepaid travel cards using Wirecard technology, at one point had £50m of client money frozen. Mr Strafford-Taylor said a migration to another technology provider could take “six months or more”, given that it would involve re-carding one million customers.

Banking platform Curve, whose app allows customers to consolidate multiple bank accounts into one payment card, found itself blindsided by the FCA move last Friday. By Monday, it had brought its card and e-money issuing services in-house and transferred to another payment processor, in turn severing all ties to Wirecard.

Morses Club, the high cost credit provider whose U Account cards were suspended by the FCA intervention, subsequently announced plans to switch to a new banking service in the Autumn. It also offered its customers free banking services during July, “in recognition of the considerable impact and distress the temporary freezing of accounts has caused”.

The episode nevertheless raises questions over fintech executives’ decisions to continue partnering with a firm whose parent company was subject to allegations of fraud and corruption. Three companies said they had sought legal opinions on the risk, all of which concluded that WCS was a separate entity to its German parent and therefore protected.

“The protection afforded by the e-money licence and the FCA registration were very important,” explained Mr Strafford-Taylor, adding that it would be “unconscionable” that Fairfx customer money would not be safeguarded under the regulatory supervision. “The people who are working [in the UK arm] have followed the rules but have had the rug pulled out from them. All along, they emphasised to us that they’re separate, profitable, and only rely [on the German parent] for a small piece of tech.”

There is also little doubt that many fintech start-ups, whose lack of critical mass make it hard to issue cards on their own, were happy to work with Wirecard. “Their technology has done an awful lot for us,” said a spokesperson for one of the affected companies, asking not to be named. “The business really allowed the big names like Monzo and Revolut to get up on their feet."