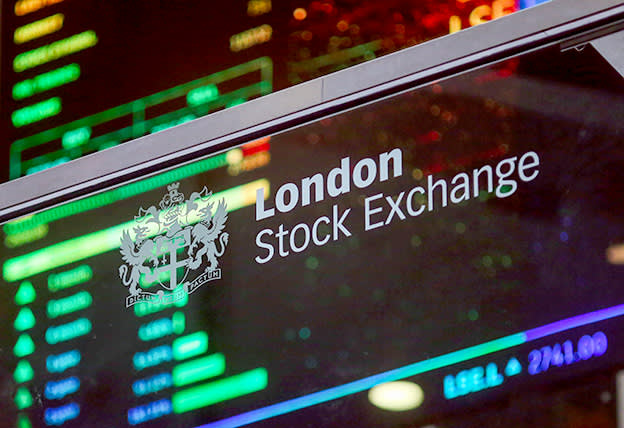 Yawn and stretch and try to come alive... European stock markets are up a bit, the dollar is up a tad after a run of losses, oil is stabilising after rallying to multi-year highs last week and Bitcoin jumped over the weekend and now trades above $42k. Friday’s strong US jobs report off seems to underpinning a bit more confidence for risk, but German industrial production data is dragging on sentiment a bit, sliding -0.3 per cent vs an expected gain of +0.4 per cent. Basic resources and retail are the top performing sectors in Europe, with real estate and oil & gas the weakest. Asian markets helped by a rally for Chinese stocks as they reopened following the Lunar New Year holiday despite some softer-than-expected services PMI figures. In London, the FTSE 100 rallied 0.4 per cent in early trade to sit around 7,550. Housebuilders struggled as data showed house price growth slowed to its weakest in five months. A big week for blue chips reporting earnings – Unilever (ULVR), BP (BP), GlaxoSmithKline (GSK) and AstraZeneca (AZN) among them. A lot apparently hanging on Unilever’s results amid shareholder discontent.

US markets enjoyed their best week of the year, but volatility remains. The S&P 500 and Vix index both rose Friday, hardly a sign of calm returning. Intraday index moves remain in excess of 1 per cent. The forces of earnings, inflation and the Fed’s nascent hiking cycle continue to exert influence on market dynamics. You’ll no doubt have read that Meta (FB) lost $200bn in market cap whilst Amazon (AMZN) gained a similar amount. The S&P 500 closed the week up 1.5 per cent, the Nasdaq climbed 2.4 per cent. Shares in Peloton (PTON) rose 26 per cent after-hours amid reports that Nike (NKE) and Amazon are circling the embattled company.

DP World (91SN) benefitted from a partial recovery in global container traffic, booking 77.9m TEU (twenty-foot equivalent units) across its global container terminals through 2021, with gross container volumes increasing by 8.9 per cent on a like-for-like basis. Numbers slowed down through Q4 as the omicron variant stalled global growth, but the salient detail is that DP World’s performance trumped the industry average. Group chairman and chief executive Officer Sultan Ahmed Bin Sulayem said that the upsurge in volumes leaves DP World “well placed to deliver an improved set of full year results and we remain focused on delivering our 2022 leverage targets”. MR

Great Portland Estates (GPOR) lauded its performance since the start of the financial year on 1 April 2021, with market lettings 9.8 per cent ahead of March 2021's estimated rental value. The estimated rental value has surpassed the previous record leasing high of £31.8m in 2016 with two months of the financial year remaining. The company added that rent collection for its December quarter was in line with the previous period. MR

Lok'nStore (LOK) confirmed that self-storage revenue for the half year to 31 January 2022 was up 34.1 per cent on the previous year, driven by significant improvements in both occupancy and pricing.  Price per sq. ft. of occupied space was up 18.5 per cent and unit occupancy was up 6.0 per cent over 12 months. The shares were up by 2.7 per cent on early trading. MR

Pets at Home (PETS) has tapped Sky UK chief consumer officer Lyssa McGowan as its new chief executive. She will take over from Peter Pritchard on 1 June, and will join the board in April. McGowan also recently served on the board of Morrison's, until its sale to US private equity giants CD&R last autumn.

The pet care company was initially seen as a pandemic winner but speculation over the exits of both the chief executive and head of vets have weakened shares this year. Broker Liberum says that this “high quality, very experienced hire” adds to the “enviable position” Pets at Home is in, with rising pet ownership over Covid-19 expected to pay dividends for years to come. Even with price inflation, pets are one of the last things that consumers cut spending on, giving the group sure footing for the future. MT

THG down after Friday feast

After a quick run-up on Friday, THG’s (THG) share price is back in negative territory, coming off almost 5 per cent on Monday morning. The online retailer was the centre of buyout speculation late last week following its spectacular valuation collapse since listing a year ago. Its share price is now 84 per cent down from its listing price of just under 800p.

Over the weekend, The Sunday Times reported private equity firm Advent International had visited THG’s offices, following up on a Betaville report from last week that detailed “rumours” of interest from Advent, Leonard Green Partners and Apollo.

The value in THG is largely its beauty and nutrition sales, which climbed strongly last year. The beauty division crossed the £1bn in sales mark, an increase of almost half on 2020. AH

US nonfarm payrolls surprised to the upside on Friday. Headline reading came in at +467k (expected +150k, previous +199k); unemployment rate: 4.0 per cent (exp. 3.9 per cent, prev. 3.9 per cent; earnings +0.7 per cent month-on-month (exp. 0.5 per cent, prev. 0.6 per cent) and +5.7 per cent year-on-year (exp. 5.2 per cent, prev. 4.7 per cent). Wages were up big, jobs growth much better than expected; a reading that gives the Fed carte blanche to hike in March by 50bps should it choose to. Also, there were some massive revisions to prior months. Indeed, the market is now pricing in a roughly one in three chance that the Fed raises its funds rate by 50bps next month, swaps show market is pricing three 25bps hikes by end of June.

Curve flattening: the 2-year Treasury yield posted its biggest daily rise since March 2020, shooting above 1.3 per cent; the yield on the 10-year bond is up above 1.9 per cent, its highest since December 2019. The spread has narrowed to 60bps, not this narrow since 2020. UK gilt yields are also on the march – traders seeing a 50 per cent chance the Bank of England raises rate in March to follow the Feb hike. Two-year gilt yields rose the most since Sep 2017 last week. And we should not forget the ECB’s hawkish turn... the German 2-year yield is up to its highest since September 2015.

Oil eased back a touch from the multi-year highs struck last week. WTI futures (March) remain above $91, Brent above $92. Looking for that so-far-elusive indication that a near-term top has formed. Aramco said to be mulling a fresh share sale… you know where the Saudis will want to keep prices.