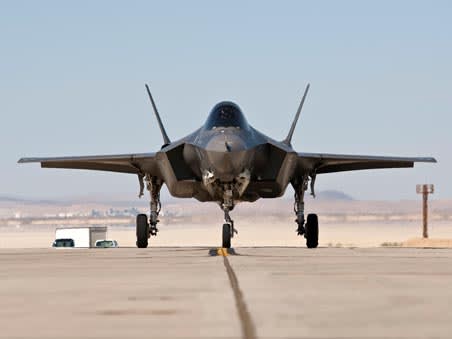 Defence firms in fight for growth

With another round of US spending cuts imminent and growth hard to come by, the defence sector's re-rating has advanced far enough

Budget cuts in the US, by far the world's biggest buyer of military hardware, and across Europe threatened to plunge the defence industry into chaos. Withdrawal from Iraq and Afghanistan only compounded the problem and a subsequent slump in profits would surely spell doom for share prices, too. Well, it didn't. In fact, aerospace & defence has been one of the best performing sectors over the past two years, almost doubling since mid-2011. There are, however, further challenges, and while the boom in commercial aerospace has softened the blow, justifying current valuations is easier for some than others.

Will America 'do the right thing'?

Perhaps most pressing is the bloody political battle in Washington. According to the Stockholm International Peace Research Institute (SIPRI), America spent $682bn (£425bn) on arms in 2012, four times more than second biggest spender, China. But that was down 6 per cent in real terms and further significant cuts under sequestration, which took effect in March, look inevitable. Even the Pentagon's travel budget has suffered judging by the noticeable drop in American visitors at the recent defence industry tradeshow in Docklands (DSEI). A series of significant deadlines over the next few months are unlikely to knock sense into Congressmen, either.

Indeed, with the US fiscal year-end (30 September) just days away, there's still no agreement on a new budget, which includes President Obama's request for almost $527bn for defence. And, despite the violence in Syria, Egypt and Kenya, few hold out much hope of a 'grand bargain' to end indiscriminate cuts. Remember, no deal by 1 January strips another $52bn from the Pentagon's coffers. Best guess now is some kind of stopgap measure until mid-December. That would make a crucial deal to raise the $16.7trn borrowing limit, which the government could hit as early as next month, more likely.

Winston Churchill once said: "Americans can always be counted on to do the right thing...after they have exhausted all other possibilities." Let's hope so. Without agreement, the defence department will again be hobbled by a continuing resolution, meaning project delays and inevitable hold-ups for UK firms. That tends to affect companies such as Ultra Electronics (ULE) and Cobham (COB) first, as both rely on turning round orders quickly. Many of Chemring's businesses are similarly short-cycle in nature and visibility poor.

One mustn't underplay the importance of America's military financial muscle on the UK sector. BAE Systems (BA.), Ultra, Cobham and Qinetiq (QQ.) do between 40 per cent and 50 per cent of their business there. And, despite the cuts, all - unless Qinetiq decides to sell its US division - will continue to rely on the states for a slug of work. Analysts told us in March that speculation about sequestration was actually worse than the impact ('Defence industry kept guessing'). They were right. But is that enough to justify the sector re-rating to over 13 times earnings estimates for 2014?

"In some cases it is," says Sandy Morris, an analyst at Jefferies. "Over here we took a much dimmer view of sequester than in the US and BAE was punished in a febrile market. But the market forgot that about 70 per cent of BAE's business is not US defence and the impact was exaggerated." BAE's share price has surged 50 per cent since November and now trades on 10.5 times earnings, underpinned by a £1bn share buyback programme and significant Middle East business.

Chemring (CHG), however, is a different kettle of fish. "If budgets are cut or even go sideways, they may be forced to compete on price and it could get messy," warns Mr Morris. Yet the manufacturer of flares and countermeasures trades on an earnings multiple of almost 13. So, too, does Qinetiq, which has problems of its own. Still, Espirito Santo analyst Ed Stacey appears relatively sanguine. "We've taken the brunt of sequester and sector earnings have held up and been factored into guidance sufficiently well enough."

What's more, low-teen earnings multiples must be taken in context against a wider market for a sector with little growth and low beta, says Mr Stacey. After a significant re-rating this summer, both the industrial engineering sector and electronic & electrical equipment trade on 17 times earnings, dropping to 15.5 times next year's forecasts. In its favour, aerospace & defence offers decent cash returns via buybacks, both here and in the US, and a commitment to dividend growth - 10 per cent a year in Cobham's case.

Clearly, relying on the US is no longer an option for military suppliers. According to SIPRI, America's share of the $1.75trn spent on arms worldwide last year fell below 40 per cent for the first time since the collapse of the Soviet Union. "All the indications are that world military spending is likely to keep falling for the next two to three years - at least until NATO completes its withdrawal from Afghanistan at the end of 2014," says SIPRI's Dr Sam Perlo-Freeman. "However, spending in emerging regions will probably go on rising, so the world total will probably bottom out after that."

Both the Middle East and North Africa are hot right now. Spending there jumped 8 per cent in 2012, aided by Oman's £2.5bn deal with BAE for Eurofighter Typhoon jets and £1.6bn order for Hawk training jets from Saudi Arabia. South America is spending big, too. BAE is chasing orders for Typhoons in the UAE, South Korea and Malaysia. And smaller firms such as Vitec (VTC) and Vislink (VLK) are doing well in the burgeoning security market where demand for border patrol and anti-smuggling technology is growing fast.

The impact of America's pivot to the Pacific should not be underestimated, either. Its navy and airforce are clear winners here at the expense of land divisions. That's better news for Cobham, supplier of air-to-air refuelling systems, antenna and radar parts; and for Ultra, given the popularity of its sonar systems and existing relationship with the US Navy - its biggest defence customer. Of course, cyber security is rarely out of the news - two UK banks have admitted attacks in recent weeks. It's big business, yet every defence contractor worth his salt is fighting for a slice of this pie. Sensors and operating systems sold into transport and energy markets offer valuable diversification, too.

Defence contractors weathered this year's storm of spending cuts better than anyone expected and have been rewarded with much higher valuation multiples. True, the sector rating still appears modest against comparable industries, but few companies dependent on military sales predict much growth in 2014, even with exposure to civil aerospace and new defence markets outside of NATO. Unless there's an unexpected outbreak of commonsense in Washington, it will be difficult for those without something special in the locker to make much ground in the months ahead.

We remain positive on Eurofighter partner EADS (FR:EAD). Already up 21 per cent since our buy tip (€39.02, 18 Apr 2013), the European giant's passenger jet division, Airbus, will generate significant growth for years to come. A share buyback is under way and margins are improving, too. A clampdown on civil aerospace costs should also boost returns at engine-maker Rolls-Royce (RR.), currently sitting on an order book of more than £69bn, and GKN's (GKN) new aerospace business bought from Volvo last year easily offsets weakness in defence. Orbital Sciences (US:ORB), the US missile and spacecraft firm tipped here in the spring (Buy, $16.45, 4 Apr 2013), has taken off, too. Its Antares rocket launched successfully and the group's Cygnus capsule is about to dock with the International Space Station (ISS). If all goes well, the rewards could be huge.

A substantial chunk of Chemring's business depends on active military conflicts, so withdrawal from Afghanistan is painful. Spending cuts and delays are, too, and a countermeasures contract from the Middle East hasn't arrived yet, either. What's more, Syria has proved only a temporary tailwind and the share price has now been stuck in a narrow range (297-323p) for the past 11 weeks. More on the new management's comprehensive business plan is expected in November.

Increased domestic energy security, voter reluctance to enter war zones and determination to check China's ambitions in the Asia Pacific region mean that the US will reduce its focus on the Middle East in favour of cross-Pacific neighbours. Regional allies are being advised to boost their defence spending to help head off China's perceived big footing of the region. The presence of a South Korean warship moored in London's Docklands for the recent arms fair was telling.

Ultra Electronics (Buy, 1,950p) and Cobham (Hold, 320p) are beneficiaries of this US pivot. Both have product that serves the requirement for better capability deployed in longer stand-off environments. Demand for Ultra's anti-submarine warfare product and Cobham's air-to-air refuelling equipment is already rising. Ultra recently won its first Indonesian contract, worth £32m, to upgrade a naval command & control system.

There are risks, however. Declining US budgets and uncertainty around sequestration remains a headache for most defence companies. Sequester cuts are due to escalate next year (from $37bn to $52bn) and compromise among lawmakers seems optimistic. The Arab Spring also appears to have run its course.

In our view, valuations seem full. The sector has been on an upward vector with year-to-date performance up 30 per cent, as year one of US sequestration has been manageable and the outlook for civil aerospace remains aloft. From here we see downside in short cycle Chemring (Hold, 270p), which re-iterated a challenging outlook at the DSEI show, and we recently downgraded Cobham to a 'hold' on valuation grounds. We see most upside with Rolls Royce (Buy, 1,340p) given exceptional civil exposure. Defence sector consolidation is deemed inevitable, too, but not until there is more clarity on US spending.