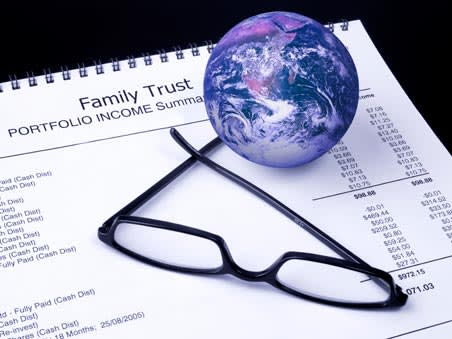 With markets hitting new highs, it is perhaps understandable that many financial commentators and investors are nervous - the 'sell in May' adage is much heard. Some have been sounding cautious for a number of years. One day they will be proved right - few markets rise without interruption. However, the portfolios remain invested because they are adhering to a tried and tested investment principle, and because the investment climate generally remains supportive of markets.

With the proviso that a portfolio should always reflect investment objectives, risk profiles and time horizons, the evidence suggests the longer one is invested, the more likely a positive return will result. Useful research from Fidelity has shown that over the period 1980-2012, investing in global equities for 12 years or more produced no negative returns. By comparison, five-year periods produced a 16 per cent chance of a negative return.

Meanwhile, in highlighting the risks of jumping in and out of the markets, a few years ago Fidelity showed that missing out on just the 10 best trading days of the MSCI World Index over a 10-year period from 31 December 2002 would have resulted in negative returns of -4.6 per cent. Had an investor missed the best 20 days then the negative return would have extended to -32.1 per cent.

Perhaps the more telling point is that investors who do sell then have to make another decision as to when to buy. A report by Blue Sky Asset Management in 2010 suggested investors rattled about market falls were failing to take advantage of cheaper prices. Having analysed bear markets in the UK since 1972, it found cash hoarded for a year after a market low would reduce returns by up to 75 per cent over the following four years.

Time in the market is indeed better than market timing. Barclays suggests investors who tried to time the market from 1992 to 2009 were down 20 per cent compared with those who had simply stuck with it. Accordingly, the portfolios leave wiser investors to judge short-term market movements.

Instead, the portfolios prefer to remain invested, chart a steady course, and look to the long term with the intention of gradually adding value over time - in a way, they adopt the tortoise's strategy when racing the hare. If approached correctly, the cumulative results of such an approach can pleasantly surprise the patient investor.

In addition, it allows the full harvesting of dividends which, again over time, account for the vast majority of the markets' returns. It also acknowledges the importance of humility when dealing with markets - and, in doing so, reminds us of the importance of holding good companies for the long term, rather than believing we can do better by trading them.

According to many forecasters, there remain a host of reasons why one should be cautious - reports suggest over 40 per cent of professional investors think markets are overvalued, profit growth has been too sluggish, QE is dangerous, geopolitical risk is on the rise, etc. This is all, to varying degrees, true. But in the absence of war or some other 'black swan' event, equity markets tend to 'climb a wall of worry'. It is when everyone is positive that one should peer even harder into the horizon and look for icebergs.

In this regard, high cash levels should give comfort. According to Bank of America Merrill Lynch's fund manager survey, cash now stands at 5 per cent of assets. This is higher than the average for the last 10 years - which includes a period when cash levels were very high during the 2008 crash. There is a lot of money waiting to be committed to markets.

Meanwhile, a key source of support for markets has been QE. A constant theme of these columns since 2009 is that high debt is the differentiating characteristic of this slowdown. Policy makers essentially have five options: stimulate economic growth, but this has proved elusive; cut spending, but this has proved difficult; default individually, which is very painful; engineer a globally-coordinated debt default, allied to 'confidence' measures as to future commitments, which is still possible; and encourage inflation, which helps erode the debt.

Accordingly, interest rates were always going to remain low and QE continue for longer than the consensus expected because, together with more subtle initiatives, this combination met policy objectives. Growth needed encouraging, bank balance sheets needed repairing, and deflation needed avoiding - with policy overall being assisted by a consequence of QE, that of weakened currencies. Those bemoaning sterling's fall since Brexit miss the point entirely. And equities tend to do well during the early stages of an inflationary tick up.

Indeed, the global economic recovery of recent years continues at a modest pace: US unemployment continues to fall; the UK has the second-fastest growth rate in the G7; while even the EU - usually the laggard - is beginning to recover. The 'healing process' following the financial crisis remains on track, with global consumer confidence now at a 17-year high. The risks of QE are not yet high enough for policy makers to consider a material change in direction.

Meanwhile, company profit growth is also starting to recover. The companies comprising the MSCI Global index have seen profits making little progress since the crisis, but this is now beginning to change - with investment also beginning to pick up. This is important when combined with the positive impact of technology on business growth.

To be a long-term investor, one needs to be an optimist regarding mankind's ability to innovate and progress. As highlighted in previous columns, technology will be a key component, through which companies will benefit from a combination of cost savings and new growth opportunities from enhanced products and services.

Significantly, advances in fracking, solar, wind, wave and battery technology are already reducing the cost of energy. The economic historians among us will understand the significance of this - giant steps forward by mankind have usually been associated with new and cheaper sources of energy. History suggests the future looks promising.

During June, the portfolios looked to prune or replace holdings thought to look a little expensive and replace with more attractive opportunities. Accordingly, the Growth portfolio top-sliced its holdings in Chelverton Small Companies Dividend Trust (SDV) and Standard Life Private Equity Trust (SLPE), and left the proceeds in cash. Meanwhile, the Income portfolio sold F&C Private Equity (FPEO) and used some of the proceeds to introduce Regional REIT (RGL) when yielding 7.3 per cent. A fuller description of RGL and the changes in general is given on the website www.johnbaronportfolios.co.uk