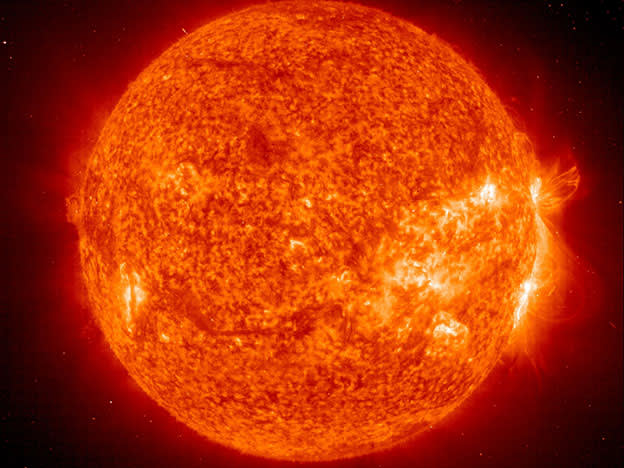 Beware the flare: the next market-shaking event?

The world's stock markets are in fine health after a pandemic that has shut down huge portions of the global economy. What could actually cause a crash?

Everyone is of course sick of the c-word. But polite company has come to accept heavy talk of Covid-19, even if it is just used as an excuse to skip potentially mediocre Christmas parties. For investors, who have largely done well out of this pandemic period, the question is what could actually knock the current bull-market off course if a world-shutting pandemic cannot.

To pick out some options, we start in the usual place, and land on another c-word: Conflict.  The starting point, as ever, is Vladimir Putin’s inner thoughts. The Russian president was helpful enough to write a 5,000-word essay on why Ukraine should be part of Russia earlier this year. “I would like to emphasise that the wall that has emerged in recent years between Russia and Ukraine, between the parts of what is essentially the same historical and spiritual space, to my mind is our great common misfortune and tragedy,” he said.

This is not just hot air. Nato secretary general Jens Stoltenberg said in early December there was a “significant and unusual concentration of forces” at the Russia/Ukraine border. “Any further Russian aggression against Ukraine would come at a high price,” he said. Would it though?

Kadri Liik from the European Council on Foreign Relations told the Financial Times that the US would be very unlikely to assist Ukraine beyond military aid.

An all-out war is unlikely – Liik was sceptical of such an outcome given both the perceived relationship between US president Joe Biden and Putin and the lack of enthusiasm among the Russian public for a large-scale invasion – but in this scenario, where there is little intervention from Nato, it is unlikely that chunks would be taken out of London investors’ portfolios. Of course, the situation would be bleak on the ground and key supplies such as gas would become an issue again for Western Europe, but while the Crimea invasion in 2014 triggered a Russian sell-off, outside reaction was limited.

Sticking with the c-theme, China invading Taiwan would have much more of an impact on global markets. The US has used much stronger language around its ties to Taiwan and there is little relationship between Xi Jinping and the White House, while the upcoming Winter Olympics have allowed governments like the UK and Australia to make a point by staying home while the Chinese accuse them of “political manipulation”. Manipulation of what, exactly, is not clear.

These are risks that people spend a lifetime studying and talking about but largely come down to the whims of two men: Xi and Putin. Either man could trigger a massive conflict with the US and its allies at almost any point, but this would also see China and Russia go down the toilet.

There is another prospect that is much scarier than Vlad deciding he wants a bit more of Ukraine, both from a markets and life-on-earth perspective. Coincidentally, it also starts with ‘c’, to keep with the theme: A coronal mass ejection, which is related to a solar flare.

In early December, scientists at the University of Colorado Boulder published a paper in the journal Nature about a solar flare – a superflare really – observed from a young star named EK Draconis, which is 111 light years from earth.

The flare came 30 minutes before a coronal mass ejection, which is what would do the damage to earth in a similar scenario. The university said a similar ejection would “fry satellites in orbit” and “shut down the power grids serving entire cities”. The EK Draconis superflare was 10 times as large as any seen from the sun, and the scientists said it could happen in this solar system every few thousand years.

In the scenario in which the sun decides it’s time for that larger sneeze (sorry, superflare) in calendar-year 2022, the consequences of mass power outages and global communications issues aren’t hard to imagine.

Just extend the power outages in the north of England after Storm Arwen at the end of November across the UK, add the panic of the early days of Covid-19 (goodbye toilet paper supplies) and then watch as people liquidate holdings to raise cash.

In terms of where to put that money once the panic has subsided, there are a few choices.

If it’s just a few months of flickering lights and patchy phone reception, we’d go with the old favourite of gold and maybe the supermarkets, if they can maintain supplies, while the Covid-19 selloff is a good indicator of which stocks would take the hit initially (airlines, retail, hospitality). Even Tesla (US:TSLA) might finally stumble if there was no power to charge its cars, although this is not a given.

If the superflare and coronal mass ejection lead to total system failure, then we’d go straight to the survivalist’s favourite metal, silver, which has technical uses as well as being an affordable store of value. Although if things get that bad then investment choices will be trumped by other needs. A buy rating on survivalist courses, perhaps.