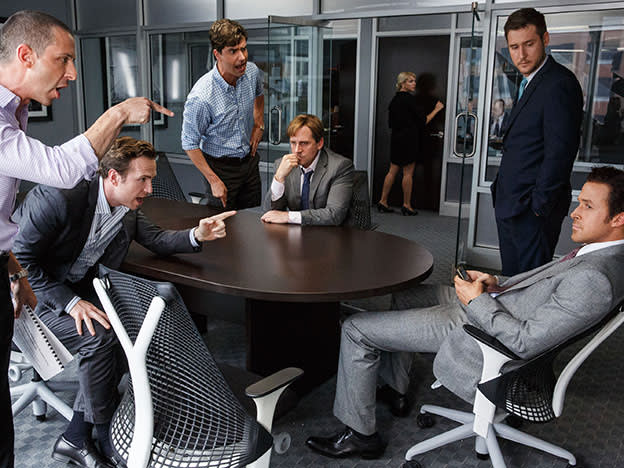 Investing films to watch this Christmas

Can investors learn from how their pursuit is portrayed on screen?

Those settling down to some festive film viewing this month could soon find themselves on a crash course in finance: December programming staples offer lessons on the downside of fractional reserve banking (It’s a Wonderful Life), the merits of compound interest (Mary Poppins) and even the risks of holding the company cash balance in bearer bonds (Die Hard).

But mixing business and pleasure doesn’t have to end there. The cinema offers plenty of stories about investing to provide a welcome diversion this Christmas, or any other time of year for that matter. Some might even provide a bit of food for thought, too.

All the same, filmic financial education doesn’t have a great track record. Two of the most famous efforts – Wall Street and The Wolf of Wall Street – were envisaged by their respective creators as cautionary tales. Both achieved their notoriety for precisely the opposite reason: the glamour of the trading floor and its accompanying lifestyle loomed larger in viewers’ minds than the protagonists’ eventual downfalls.

That may be in part because the ‘lessons’ provided – that power corrupts, that pride comes before a fall – are as old as storytelling itself. By contrast, the setting for Wall Street, released just two months after Black Monday, was a world that felt pretty new to viewers because it was only when the film's Gordon Gekko, played by Michael Douglas, arrived on the scene that pop culture really started to reckon with stock markets.

Douglas’ role is more of a caricature than a character, but at the time he represented the big bang of the investing cinematic universe. In Hollywood’s modern era, Trading Places (1983) is more or less the lone forerunner. But the post-Wall Street period is fertile ground and many of the efforts of this time adeptly combine entertainment with a financial or real estate twist: films such as Working Girl, Glengarry Glen Ross and The Bonfire of the Vanities.

Even the made-for-TV movies of the age stick in the memory: Barbarians at the Gate, the story of the leveraged buyout of RJR Nabisco, does a fine job of matching the standards set by the classic business book of the same name.

In other cases, it’s obvious why films have started to fade from memory. Danny DeVito vehicle Other People’s Money springs to mind, as does the City’s own spin on Wall Street, 1989’s Dealers.

Putting the work in

Good or bad, many of these efforts are variations on Hollywood’s favourite theme: the rags to riches story, the American dream, call it what you will. But these plotlines don’t have much in common with individual investors’ own paths to success.

Inevitably, the unglamorous world of company analysis hasn’t found much favour on the silver screen. Number crunching just isn’t cinematic, and even documentaries sometimes show an unwillingness to get caught up in the detail.

“People perceive it as being all about the numbers… in reality it’s about people," a talking head says at the start of Enron: The Smartest Guys in the Room, which details the downfall of the Texas oil trader. Investors' Chronicle subscribers might disagree: the personal touch and the wider context can never be discounted, but the Enron accounts held clues to the truth long before its executives ever admitted any wrongdoing.

As it happens, the balance sheet line item that first rang the Enron alarm bells was itself closely related to the film world: it was the collapse of an online streaming collaboration with Blockbuster Video that focused attention on Enron’s free and easy mark-to-market accounting practices.

The work involved in uncovering scandals like these is usually ignored or covered off in a quick aside or two. There are occasional on-screen examples of hard-yards research, but they don’t tend to be found in films about investing. Willing viewers must instead turn to the legal thriller.

Those so-inclined could do worse than 2019’s Dark Waters, not least for the segment in which Mark Ruffalo painstakingly makes his way through hundreds of boxes of documents in a bid to prove corporate malfeasance. Those who invest in banks, a sector that consistently demonstrates there is no upper limit on the length of an annual report, will sympathise.

Yet however much the individual or professional investor strives to take the emotion out of investment, some highs and lows are inescapable.

Films tend to exaggerate those peaks and troughs, or simply focus on the most egregious examples. But the digitised, increasingly abstract nature of modern finance can still make it tough to convey the real significance to the viewer. In the present day, dramatising market activity usually means actors reading numbers on a computer and looking worried.

Fortunately, there are some films that got in while the going was good. The original method of displaying market trades and prices – ticker tape – wasn’t exactly efficient, but its physical qualities do add a certain something to films from previous eras.

Long before The Wolf of Wall Street, for instance, there was the ‘Bull of Broad Street’, as featured in the 1937 comedy Easy Living. Here, the market volatility and herd behaviour on display in the Wall Street Crash became the subject of parody, and ticker tape is as good a way as any to visualise that: it piles up first as misinformation leaves the Bull on the verge of bankruptcy, then a second time as equally wild rumours that the Bull has cornered the steel market prove his saviour.

Of course, this wasn’t the last Hollywood comedy to culminate in a short squeeze – 46 years later, the plot of Trading Places concluded with a similar scheme.

Joke or not, tales like these do still have relevance in the modern era. Cornering the market is a hard ask these days (both legally and practically), but short squeezes are still very much in fashion, as this year’s meme stock craze underlined. A record of that market activity has been preserved for future generations in its own way on the Reddit bulletin boards.

Viewed from the vantage point of 2021, those same scenes now have the benefit of period authenticity – although the film’s main themes of alienation and ennui mean it’s not exactly prime Christmas Day viewing.

The financial crisis and beyond

Finance has had its own fair share of existential crises over the years, most obviously in the immediate aftermath of 2008. Certain films from this era need little introduction: The Big Short’s examination of contrarian calls come good will appeal to some private investors, particularly as its high-energy style makes a decent fist of dodging the representational issues mentioned above.

But it is Margin Call, released to relatively little fanfare in 2011, that professional investors tend to cite as their favourite of the era. A downbeat portrayal of an investment bank facing the abyss, it does contain its fair share of alarmed faces staring at screens. All the same, it’s hard to beat as an exploration of how employees, both junior and senior, jostle for position when their backs are to the wall.

As one character says in Margin Call’s only real moment of grandstanding, the events of 2008 all had real-world consequences. And investors searching for cinematic exemplars shouldn’t be afraid to consider themes further removed from the world of finance, either.

In some cases, direct lines can be drawn: unconventional statistical analysis of the kind sketched out in the film adaptation of Michael Lewis’s book Moneyball is now being incorporated into investment practices.

But why stop there? Film also offers the chance to literalise some famous investment metaphors. The bond manager Bill Gross said in 2010 that gilts were “resting on a bed of nitroglycerine”. That particular explosion hasn’t happened yet, but those unable to envisage what Gross was getting at should try the 1953 French film The Wages of Fear. Here is a chance to see that same substance, nitroglycerine, transported in rickety trucks across rough terrain, the idea being to use it to extinguish a fire at a distant oil well. It won't teach you much about commodity markets but it does provide a lesson in holding your nerve in a high-stakes situation.

Talk of stakes naturally calls to mind the world of gambling, a topic with which investing films often draw parallels. Rapid gains and excessive losses have an inherent drama to them; the process of slow and steady accumulation does not put bums on seats. Boiler Room, a 2000 film featuring Vin Diesel in pre-fast car form, seizes this comparison by having its main character switch from casinos to pump-and-dump stock scams. The plot is outlined in pretty broad brush strokes, but the investing material is interesting enough to make it worth a watch.

To bring things full circle, it should be noted that the main characters obsess over Gordon Gekko. Boiler Room’s focus on the risks of penny stocks mean it’s arguably more successful as a cautionary tale than its higher-profile predecessor.

But film lovers perhaps shouldn’t be so quick to write off the racier end of the retail investing world. This year, the question has not been what cinema can teach investors, but what investors can do for cinema.

The early 2021 surge in AMC’s (US:AMC) share price allowed the company to raise more than $1bn in capital and rescued it from the prospect of bankruptcy. That may have been unjustified by the fundamentals, but it’s likely that at least some of the 112 Odeons dotted round the UK would have failed to re-emerge in the event of its parent company’s failure.

With Cineworld (CINE) still teetering, retail investors have helped preserve the big-screen experience for the moment. True to form, the film world is attempting to return the favour: at current count, there are at least five films about the meme stock saga now in development.