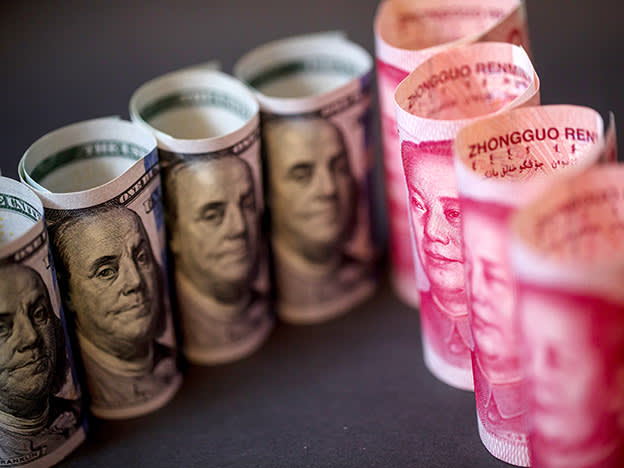 Currency wars: the dollar will remain a global linchpin

Economies facing fallout from weaponised finance will look to other currencies, but nothing comes close to the greenback

In the late 1990s, Russia’s vulnerability to international currency markets played a significant part in a financial crisis and severe recession. That hardship wasn’t self-inflicted to the same extent as the Ukraine war (although an ulcerous conflict in Chechnya played its part), but it was the US dollar system that had the capacity to wreak pain. Today the greenback’s economic power is being used even more forcefully to punish Vladimir Putin’s floundering attack on Russia's western neighbour.

Weaponising finance through sanctions and preventing Russia using the dollar-led financial system is a seriously heavyweight tactic. Before the invasion, Russia’s central bank had pre-emptively reduced its dollar holdings (to less than 7 per cent of overseas reserves, reports S&P Global’s IHS Markit), but a reliance on advanced economy currencies issued by US allies and associated payments infrastructure such as the Belgium-based financial messaging service Swift have hit hard.

Effectively, hard currency funding for Russian companies has been cut off and billions of foreign exchange reserves rendered useless. In the short term, Putin knows European dependence on Russian oil and gas is an ace in the hole, but as countries like Germany wean themselves off (maybe faster than expected), the financial noose will tighten.

Initially, the banking arms of energy firms like Gazprom were dealt with more leniently, so Europeans could pay for their oil and gas in euros, but the blackballing of Russia’s central bank means it can’t work with government to help hydrocarbon revenues be traded to fund shoring up the rouble. Hence Russia's attempt to strong-arm foreign energy customers into paying in roubles rather than euros, as contracted.

Sanctions aren’t pain free for the United States, and create major issues for the European Union, but with the war on its doorstep the EU must continue to cajole members to take a stand. Some nations have literally metered their responses; Japan for example has always seen energy security as an Achilles’ heel. Nonetheless, restrictions of some kind have been enacted by the bodies that control nearly all reliable currencies, leaving Putin with only China to turn to.

Notably, despite its support in principle (albeit tacitly acknowledging Putin’s claims to Ukraine is decidedly unprincipled) China demonstrates nervousness that it too could be penalised. Russia is accurately characterised as a giant gas station with nuclear weapons but China, as the world’s second-largest economy by GDP, and the largest on a purchasing power parity basis, is a wholly different proposition. Still, it requires dollar funding for much of its international trade, which is an acute vulnerability.

Further out, there is an argument that belligerent use of the dollar’s global reserve currency status will undermine it. For years Russia and China have been looking into alternatives and the present situation accelerates that need.

Yet the dollar retains many advantages. Chief among them are the rule of law and the governance afforded by institutions set up to facilitate international trade and money supply following the second world war. After that conflict, the US dollar was the backbone of the Bretton Woods monetary system on which the global economy was based.

Vast aid payments from the US to Europe in the building back Marshall Plan, and European companies’ need for dollar funding for international trade and commodities purchases, precipitated the growth of the so-called Eurodollar market. Now, although Bretton Woods ended more than half a century ago, the worldwide offshore demand for dollars means the Eurodollar market is crucial for countries in developed Asia, Oceania and emerging economies.

The dollarised global system has faced ups and downs – such as when the US abandoned the gold standard in the early 1970s, and the dollar devaluation at the Plaza Accord in 1985 – but is resilient. Use of dollars is ubiquitous and while banking systems aren’t easily comprehended, the United States's is far better understood and less opaque than others.

Similar standards exist in the European Union, but with the eurozone hampered by a lack of fiscal policy unity and susceptible to the same external shocks as the US economy, the euro is more diversifier than wholesale replacement for the dollar in treasury reserves. Japan has its own problems, especially an ageing demographic, and no other developed economy has the scale for its currency to partially displace the dollar, even if it aspired to do so.

Rise of the renminbi?

Only China combines the size and intent to be a credible threat. But even though its GDP will overtake America’s by 2030 (estimates the Centre for Economics and Business Research), the currency lags considerably. China’s official currency and medium of exchange is the renminbi (RMB), but yuan is the term used for units of account in China’s financial system.

The renminbi is still split between the strictly controlled onshore (denoted as CNY) for use in mainland China and offshore (CNH), which has been controversial in the past when the United States accused its value of being held at an artificially low level in order to make manufactured goods unfairly competitive. Those allegations were denied, and CNH supposedly trades according to market forces now, although there are other reasons the long arm of the communist party should discourage overseas investors.

Heavy-handed treatment of large technology companies has unravelled some of the narratives about China’s economy and the opening of capital markets. Then there are the notable occasions when state oversight has failed to avert crises, as was seen with the virtual collapse of the Evergrande real estate company.

Some large asset managers have touted Chinese government bonds as an important strategic portfolio holding, but the past two years have taught investors that renminbi assets are a long way from being a haven. Besides, as China seeks to support its financial system through coronavirus lockdowns with accommodative monetary policy (the opposite of what the west is now doing), renminbi bonds offer less of a premium to foreigners.

Rather than coming from investors, demand for the currency should therefore stem from trade, which is being stymied by the lockdowns and will be affected by western companies rethinking supply chains.

Core commodities continue to be priced in dollars, and although renminbi and roubles are being used when China buys Russian oil and gas, the rest of the world has made only token gestures to using RMB denominated contracts outside of heavy industry and chemicals markets. Partly that’s down to the value of good relations – but in a practical sense more extensive exposure to China’s currency is similarly yet to make sense.

King dollar in the era of cryptocurrencies

Central bank digital currencies (CBDCs) could have a role in foreign exchange markets and perhaps plug-in with new payment technologies. Thus far the US Federal Reserve has been reticent, but China has enthusiastically pursued development of the e-renminbi. Harnessing blockchain to control the payments industry and ecommerce domestically is for now a more plausible motive than challenging the dollar, however.

Eventually, CBDCs might displace so-called stablecoins (the crypto assets that were supposed to be pegged to major currencies like the dollar) that have seemingly had foundations on quicksand amid crypto’s violent sell-off last month. The amplified volatility experienced by crypto investors has blown some of the arguments for holding assets like bitcoin out of the water – its price having fallen around 55 per cent from November 2021 highs, it patently isn’t acting as a hedge against inflation.

The draining of liquidity from exchanges has seen crypto prices in general fall off a cliff. The role of centralised exchanges is a bottleneck, and in a further irony, central bank tightening is squeezing the cash investors had allocated to decentralised assets. On top of this, retail money from savings and US stimulus programmes that had found its way into speculation is now needed by households to cope with higher prices.

Crypto sceptics will feel vindicated and justifiably crow about the falsehood of prophesies that digital money under no central control will displace the dollar.

All of which means that, right now, the greenback is the only game in town. It’s a haven asset, the denomination for most commodities contracts, and essential for other countries to trade with the world’s largest economy. While the US has a yawning current account trade deficit, which means it must buy other countries’ currencies to purchase goods made overseas, those trade partners lend to America to fund its purchases. The way governments of other countries lend is primarily buying US Treasury bonds and notes, for which they need dollars.

US dollars are essential for the treasuries of companies around the world. Manufacturers buy raw materials in dollars, financial companies need them to meet capital requirements, fulfil insurance contracts and plug into the global banking system. Overwhelmingly, international companies will seek to tap the world’s largest capital markets to raise dollar finance. This includes banks and the explorers, drillers and miners of energy and raw materials.

As the target Federal funds rate (US interest rate) rises, the cost of dollars rises for overseas companies and investors as the rate of return on the safe dollar becomes even more attractive relative to other currencies. Throw into the mix the Fed embarking on quantitative tightening – ceasing to reinvest redemptions from US Treasury bonds it bought in the past into new bond issues – and the money supply is tightening, too.

Increasing scarcity in the Eurodollar market makes it more likely emerging nations wil struggle to afford payments on their dollar denominated bonds. This compounds the inflationary problems caused by the conflict in Ukraine – oil, gas and wheat prices have risen, which means more dollars are needed to buy them. The ratcheting of exchange rates at the same time as commodity prices is a witches’ brew made more potent by actions the Fed takes to cool off the US domestic economy.

For emerging nations, this happens at a time when demand for their own currencies is also under pressure due to China’s lockdown-induced slowdown knocking out another major export destination. Unfortunately, as with all weapons of war, currencies have potential to cause significant collateral damage.