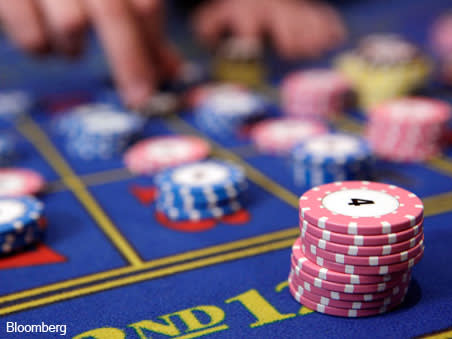 UK gambling companies are having to perform a balancing act. Operations in their home market have been hamstrung by tougher regulations, while legislative changes and added taxes threaten business lines and earnings in some overseas markets. But recent legislation changes in the US have bookies shifting their growth plans to the newly legal American sports betting market. Online gambling also continues to grow, making up for lower footfall at high-street shops.

From April 2019, the maximum stake permitted on fixed-odds betting terminals (FOBTs) will be cut to £2. This change, dramatically down from the previous £100 limit, was announced in early 2018. The three main UK betting shop operators are expected to be hit hard by the new stake limit, and the next 12 months will reveal by how much. William Hill (WMH) has already put through an £883m impairment on its retail assets and stated that around 900 store closures are expected. It’s been estimated that total net gaming revenue could fall by between 35 and 45 per cent as a result, and adjusted operating profits by between £70m and £100m.

Ladbrokes Coral is now part of GVC (GVC). This deal was announced shortly before the FOBT stake cut, on terms where GVC wouldn’t pay up in the case of a heavy cut. That proved a prudent decision, and GVC chief executive Kenny Alexander remains optimistic, saying that he’s spent the past two years creating a business that could withstand structural or regulatory shocks in any of its markets.

Paddy Power Betfair (PPB) has other reasons for optimism, and has downplayed the impact of the stake change, saying that its profitable shops and focus on sports betting should help it “better withstand the impact of lower machine stakes limits” and “benefit from competitor shop closures”.

Other countries are getting stricter, too. Many Australian states have introduced a point of consumption tax on bets placed with any licensed wagering operator, which prompted William Hill to sell its Australia business earlier in 2018. By contrast, Paddy Power Betfair believes the route to success in Australia is to increase scale via its Sportsbet business.

Asian markets have proved difficult to crack, as demonstrated by recent trading from Playtech (PTEC). Online gambling in Malaysia is still on lockdown after a government ban, while increasing competition in China has led to pricing pressure.

Salvation for the bookies may come via two routes – online gambling and US sports betting. While high-street betting shops have been hit by tougher regulation and declining footfall, operators are encouraging punters to gamble via websites or mobile apps, and some have introduced a virtual wallet that can be used both in-store and online. Rank (RNK) has introduced a ‘single wallet’ introduction in the hope that digital will offset flatlining casino play.

Meanwhile, the American dream is alive and well. GVC’s Mr Alexander reckons the US will be the world’s biggest regulated market for gambling within the next five years. Ever since legislation banning sports betting in all but four states was overturned last May, UK gambling companies have been teaming up with US operators to get a share of the winnings. GVC, Paddy Power Betfair and William Hill have all made headway with partnerships, while 888 (888) has expressed interest in expanding its US business beyond the online bingo presence it already has in the three states where such play is allowed.

According to chief executive Kenny Alexander, GVC has signed the deal that “everyone wanted”, and we think this looks promising. A joint venture with MGM Resorts has given GVC sought-after US exposure, and the creation of a “world-class sports betting and online gaming platform”. The company is also busy integrating last year’s Ladbrokes Coral acquisition with around £130m of cost synergies already identified. The shares have shed a lot of value over the past 12 months, and now trade at a discount to both their two-year average valuation and the sector. We don't think that reflects the company's international promise.

Rank’s casino business, primarily under the Grosvenor brand name, is struggling. Last year, its sites lacked visitors, and those who did turn up with hopes of making high-stakes bets were forced to verify the source of their funds under new UK rules. Management hopes the roll-out of a single wallet will encourage players to place bets both in person and online, but we're less convinced of the gamble.