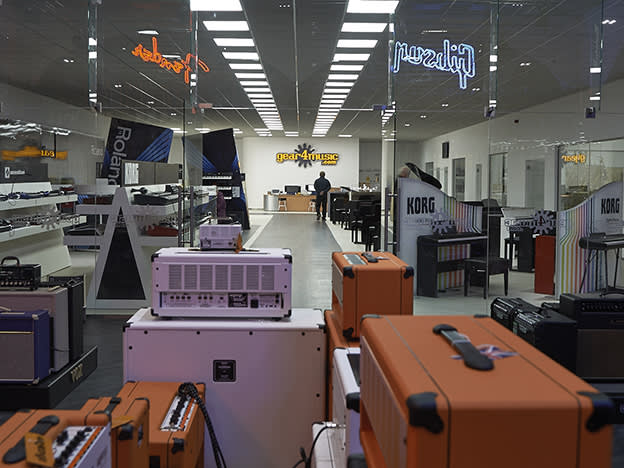 Focusrite and Gear4music sing all the way to the bank

Coronavirus hasn’t stopped the music. Disco pop fans may know Kylie Minogue just became the first woman to top the album charts in five separate decades, despite recording much of her latest record without even leaving the house.

The Pop Princess, who said she had to buy her own equipment and learn to use voice recording software, is one of thousands of musicians adapting to lockdown restrictions – leaving two Aim-listed firms singing all the way to the bank.

Focusrite (TUNE), which produces the kind of recording gear and computer programs Kylie has been using at home, reported plans yesterday to boost its final dividend after revenues soared more than 50 per cent to £130m in the 12 months to August. Gear4music (G4M), an online-only retailer of music equipment, including Focusrite products, also announced half-year revenues jumped 42 per cent to £70m year-on-year.

The headline figures for Focusrite, founded by former Led Zeppelin soundman Phil Dudderidge, will only cement its position as a darling of the Aim community. The company said the number of product registrations – a proxy for new sales – surged from 2,000 to more than 5,000 per day at the height of lockdown. Covid-19, chief executive Tim Carroll added, “was a positive for us”. Musicians won’t be leaving the home studio anytime soon, but he believes the company has expanded a base of loyal users that will endure beyond the pandemic. Peel Hunt analysts seem to agree, lifting forecasts for EPS in the year to August 2022 by 3 per cent to 28p.

With more artists splashing out on new gear, e-commerce has also reaped the rewards as brick and mortar stores were shuttered around the world. Gear4music said it served 482,000 customers in the six months to September, up 47 per cent on the same period last year. Total website visits increased more than 13 per cent to 15 million.

With promising Covid-19 vaccines now in the pipeline, the question is whether the song remains the same for these firms beyond the pandemic. Mr Carroll said Focusrite is considering developing products for the growing podcast market. He also pointed to the success last year of 18-year-old Billie Eilish – one of an emerging generation of musicians who were already embracing the benefits of not leaving the bedroom, long before Kylie mixed her vocals at home and Paul McCartney announced a lockdown album.

But the company could welcome a return to normal for the music industry sooner rather than later. Despite its soaring sales, operating profit plunged nearly 40 per cent to £7.9m, largely due to a £10.2m writedown on its recently acquired live music equipment business, following a mass closure of concerts and festivals this year. Music fans won’t be jostling in front of the stage anytime soon, but with debts from the buyout now paid off it shouldn’t weigh Focusrite down much more until live concerts return. With plenty more positive signs for the company's other product lines we say buy at 928p.

Will the music stop for Gear4music in a post-Covid world? The direction of travel was online for retail even before the pandemic, although in-store purchases still made up the biggest chunk of sales in the UK last year. Gear4music has a tougher job securing loyal customers than Focusrite – while its own range of bargain instruments make up a sizeable chunk of revenues, most of its income comes from third-party products that are sold in a competitive retail market.

The company has boosted its margins and should benefit from another boost at least in the short term, with lockdown restrictions likely to persist through the festive period. But with shares up almost 200 per cent in the year to date it currently looks pricey. Hold at 747p.