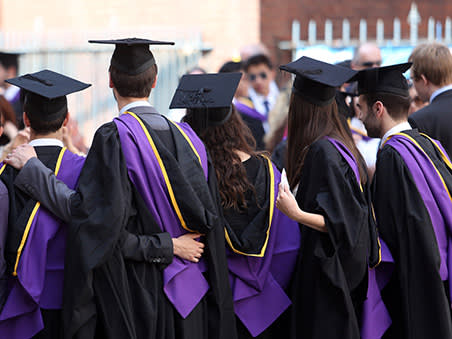 Should I pay my child's university fees?

No one likes the thought of their child shouldering university debt. But how can you help without spoiling them?

The cost of university has ratcheted up in recent years and the thought of your children leaving with heavy debts is a scary one. But are you really supporting your children by helping them out with fees? And can you lessen the financial burden while making sure they learn to budget too?

What could you help with?

"Tuition fees can be as much as £9,000 a year now and that's not the whole story, says Danny Cox, chartered financial planner at Hargreaves Lansdown. "That figure can double when you include the cost of living. Over three years the spend can amount to around £54,000 including inflation, which can feel like a huge amount of debt to saddle a young person with."

Students are eligible for tuition fee loans of up to £9,000 and from 2016 they will also be entitled to maintenance loans of up to £8,200 a year (for students studying away from home outside London). You could choose to help them with either, or both, of those costs but there is a lot to think about if you do.

Paying fees - up front or at the end of three years?

Low rates mean that it will be hard to accrue the level of interest you need to pay in a straightforward savings account. Mr Cox says: "If you pay straight away you have the benefit of saving on the interest. You would struggle to find any account paying 3 per cent plus RPI over three years if you were intending to pay at the end."

However, he and many others argue that holding off and paying the loan afterwards could have financial, and self-development benefits for you and your child.

"Some people do want to pay it off immediately but others want their children to stand on their own two feet and understand the value of money and the real world," says Patrick Connolly, chartered financial planner at Chase de Vere.

The experience of taking out a loan and receiving statements on the money borrowed could be a good discipline for your child to get to grips with, and student debt - even if you intend to pay it off - is likely to be relatively cheap. "If you wait until the end of the course you will have to pay interest you wouldn't have if you had paid up front. But in the overall scheme of things it's a small amount compared with a hefty loan," says Mr Connolly.

It could be a good idea not to tell your child whether you are planning to pay off their loan. Mr Connolly says: "It might give a child a false sense of security to come out with no debt at all and that they might be more careful if they feel they are liable for the fees."

Should you pay at all?

One school of thought suggests that parents and grandparents should not step in to pay fees at all because of the chance that many students will never have to repay it. Students only start repaying when they earn over £21,000 and the debt is wiped 30 years after they become eligible to repay. According to a Higher Education Commission report, as many as 73 per cent of students may fail to pay back debts within the 30-year period in the future due to the current fee structure.

Mr Connolly says: "You could be making payments unnecessarily if for any reasons their earnings don't exceed £21,000. It is understandable to not want to burden a child with debt but we would be apprehensive about paying off immediately. Generally, it may be more sensible to wait until the end of the course to see how their career prospects look."

But Mr Cox says this is a bad mentality for you and your child. He says: "I think it's a poor message to tell young people leaving university with a huge amount of debt that they may never have to repay it. We should be teaching kids to be responsible and only borrow for necessities. You should be pushing your children to aspire to financial security."

There is another financial incentive to clearing the loan - carrying student debt could harm your offspring's chances of getting onto the property ladder. Although student debt does not impact a student's credit score when they leave university, it is now considered by mortgage lenders. The introduction of the Mortgage Market Review in April 2014 clamped down on lenders and forced them to consider student loans as committed expenditure, a move that has reduced the amount lenders are willing to offer.

Helping out with living costs

Petronella West, cofounder and director and chartered wealth manager at Investment Quorum, says: "In the first year they will be in halls but after that they will need rent money as well as food and beer money."

With The London School of Economics (LSE) advising students to budget £1,000-£1,200 a month for living costs in addition to fees, living costs could soon exceed the full maintenance loan of £8,200. But how can you dole out cash to your children but avoid producing a financial dependent rather than independent adult on graduation day?

Having a restricted pot of money to live on will help instil financial discipline. Mr Cox says: "You can teach your teenagers about money by giving them a limited budget. Ultimately, children have to learn from their mistakes with these things."

You could give a monthly, termly or even annual allowance. Ms West says: "You need to be talking to the young adult about the ability to budget. Giving them an allowance as opposed to just saying 'I'll pay' will help. It's better to give the money to the student and for them to monitor what they're using. I would advocate giving on a monthly basis."

If you are worried that feels like spoiling them, consider an incentivised scheme, says Mr Cox, who suggests promising a pound extra for every pound earned in a summer job.

Other ways to help - turning your children into landlords

Several parents are eyeing the buy-to-let market as a solution to reducing a child's living cost burden and generating income and a potential nest egg at the same time.

While your child would not be the landlord, some say this does put them in a position of responsibility while sheltering them from costs. Mr Cox says: "The buy-to-let landlord thing works well because children have been trusted with it. Then the rent either helps to pay any interest on the mortgage for the buy-to-let or helps to subsidise the education."

Colin Low, a chartered financial planner at Kingsfleet Wealth, says: "Parents do find the buy-to-let market interesting because it's a good way to reduce costs and also make money," although he acknowledges that "the capital outlay can be very significant", while Mr Connolly says soaring property prices are putting many off the route.

Paying down debts vs a hand onto the property ladder?

Finally, think about whether your money is best channelled into repaying a loan or whether the money you have saved might be better spent elsewhere. From further education to their first home, the costs don't stop on graduation day.

Graduate loans and living costs are likely to be steeper and the loan terms more punitive than a student loan but just as necessary for those whose careers depend on further years' study. It could be wiser to hold off and help with those costs instead.

Mr Low says: "Graduate loans carry a much higher rate of interest and it might be favourable to pay those down instead of undergraduate student fees as student loans accrue at a low costs and could even get written off in the future."

It could also be more useful to channel the cash into helping them onto the property ladder later in life, according to Mr Connolly. He says: "Once the child has finished university and you have money to help them out, it's a tricky question of whether you use it to help with their loan or put it towards a deposit on a property.

"Part of that decision will be based on their earnings potential - if they are likely to be high-flyers then maybe you should pay off the loan because they are more likely be able to build up to a mortgage on their own. If not, they may struggle more to build up a deposit, particularly if they are living in London and the south east, and in that case it may be more sensible to leave the loan alone and put the money towards a mortgage deposit."