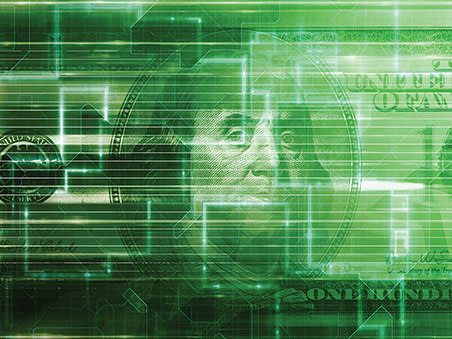 Could dollar strength lead to a repeat of the Plaza Accord? asks Neil Wilson

The dollar has enjoyed a remarkable rally over the past two-and-a-bit years, climbing by around 30 per cent against a basket of its major peers since the middle of 2014. Expectations that the Federal Reserve will tighten monetary policy by raising interest rates fuelled the gains, while Donald Trump's election win acted like a nitro-boost.

So, the dollar enters 2017 at its strongest since 2003, before the Iraq war. That should be a good thing for the US, right? Certainly every US president says they want a 'strong dollar' and Donald Trump was no different. But a soaring greenback is not all it's cracked up to be. For starters, it acts as a massive drag on US exporters - hardly what Mr Trump is angling for. Indeed, in an interview with the Wall Street Journal the new president said dollar strength is "killing us". The effect on emerging markets and bonds would also be problematic for the global economy.

If Mr Trump were minded to take action, what could he do about it? He has several avenues of attack. He can talk it down, perhaps taking to Twitter to fire off a few middle-of-the-night missives. But that's only likely to offer temporary relief. There is the option of unilateral intervention by the US - but this risks a currency war. The third option and arguably the most likely to succeed is coordinated intervention with G7 allies.

US dollars per renminbi

Parallels with the Reagan era are inevitably being drawn, but could we really end up with another Plaza Accord? In the 1980s the Federal Reserve under Paul Volcker hiked interest rates to tackle stagflation, with the Federal funds rate hitting a high of 20 per cent in 1981. While successfully combating rampant inflation, it helped lead to recession and a strong dollar that crippled the competitiveness of US manufacturers.

Parallels with the Reagan era are inevitably being drawn, but could we really end up with another Plaza accord?

In 1985, faced with a soaring dollar, which had appreciated 50 per cent in five years, the governments of the developed world convened to tackle the problem that it was driving - massive current account imbalances. This led to the Plaza Accord, an agreement among France, Germany, Japan, the US and the UK to intervene in the currency markets in order to weaken the buck and to stimulate world trade. The effect was immediate and the dollar weakened 40 per cent in three years. The US current account deficit narrowed.

There are echoes of the circumstances that led to this landmark deal. Protectionist voices were loud back then and are once again being heard as the new Trump administration takes its place in the White House. The pace of dollar strengthening is even faster today, with the buck climbing 30 per cent in just over two years.

But there are key differences. In the 1980s it was US companies (rather than the new president) who were lobbying for protectionist measures and the Plaza Accord was the compromise - make American exports more competitive while stimulating trade and growth around the world. Moreover, when Plaza emerged we'd had years of historically high interest rates; now we've had nearly a decade of ultra-low rates. The circumstances appear different seen through these lenses.

It is the combination of fiscal expansion under Reagan and monetary tightening under Volcker that is most striking. Trump - the new Reagan in many ways - is ready to open the taps on a massive fiscal growth programme. Meanwhile, the Fed has plenty of leeway to raise interest rates significantly from where they are today and Fed officials think fiscal stimulus could necessitate a faster pace of tightening. Minutes from the Federal Open Market Committee (FOMC)'s December meeting shows members' belief expansionary fiscal policy might force them to raise short-term rates more quickly than they had previously planned for.

US imports versus exports

The starting point is important. Given that the fiscal expansionary programme has yet to begin and that interest rates are still barely off historic lows, there could feasibly be a lot further for the dollar to run. The dollar index has already notched up 14-year peaks - the sky is the limit if the combination of fiscal expansion and monetary tightening proceeds at even a relatively conservative clip.

So are we ready for another Plaza?

In Jeffrey Frankel's 2015 summary of Plaza, the Harvard Kennedy School economist noted that "the day will come when Plaza-style intervention is again appropriate". He didn't think it necessary then, despite a rapid dollar appreciation in the preceding year.

But events have moved on. The dollar has continued to appreciate and all the signs point to further rises. Trump is poised to unleash classic fiscal expansion with lower taxes and increased spending. If that leads to the kind of inflation that we might expect in an economy that is already at virtually full employment, the Fed is highly likely to tighten monetary policy at a pace that is consistent with its most hawkish forecasts. US reflation is bound to lead to higher rates, which will drive dollar demand. Meanwhile, stagnant economies in Japan and the eurozone mean rates in those places are set to remain low for longer. Monetary policy divergence, long talked about, is only just getting started.

Given Trump's aim of bringing jobs home, a surging dollar is a major concern and he could be minded to intervene

Are we there yet? The spread between US and German bonds is at its widest since 1989. That is a sign we are approaching a level of concern, and we might expect that differential to increase if US rates rise while the European Central Banks (ECB) keeps the lid on European yields.

There are a range of competing factors. As stated at the start of this piece, every president says he wants a strong dollar, but none wants it crushing every other currency as dollar strength acts like a powerful trade tariff, weakening the competitiveness of US exports. Given Trump's aim of bringing jobs home, a surging dollar is a major concern and he could be minded to intervene.

US trade balance with China

It's less of a concern for export-led economies such as Japan and Germany, which makes co-operative Plaza-style intervention harder to achieve, although the circumstances could still arise. On a trade-weighted basis against other major currencies, the dollar is still a long way off its 1985 highs. For comparison, the index trades at a level just above 100 today. It topped 110 in 2002, the last major peak. In 1985 the index was above 140. The US current account deficit is a lot larger than it was in 1985 and this too could grow significantly, exacerbated by a stronger dollar. According to William Clyne of the Peterson Institute for International Economics, the US current account deficit will widen from 2.7 per cent of GDP in 2016 to nearly 4 per cent by 2021.

For now the US can weather the huge current account deficit as it's funded by massive overseas holdings of US debt. But that too could be changing. China has shed about a quarter of its foreign exchange reserves - largely held in US Treasuries - since 2014 and now holds about $3 trillion. China is attempting to shore up its currency, but these sales have not stopped the renminbi depreciating 15 per cent in that time. Further falls in the currency must be anticipated, which would further widen the US deficit with China - a very hot political potato for the new US administration as Mr Trump could use a weakening yuan to label China a currency manipulator that would allow it to start slapping tariffs on Chinese goods.

Again we must consider the commonalities with the early 1980s - could a re-run of the economics of Reagan's first term mean another Plaza Accord? There are plenty of parallels. For instance Clyne notes the "risk of escalating trade policy conflict, in a perverse dynamic reminiscent of the initial years of Reaganomics". He adds: "Currency market pressures under the new Trump administration would seem likely to be toward a stronger dollar as a consequence of higher fiscal deficits and higher interest rates".

Again the similarities with the early Reagan years are impossible to ignore. He writes: "Such an environment would resemble the strong dollar phase in the initial years of the Reagan administration, a time marked by rising currency conflict and protectionist pressures." If the dollar were to strengthen further, currency misalignments "would only widen further", he adds, concluding that "[Trump's] policies could substantially boost the strength of the dollar, resembling the experience of Reaganomics".

So certain elements of market conditions are coalescing to suggest the circumstances that led to Plaza could repeat themselves, which puts intervention on the table. But could governments pursue this course of action, even if they wanted to? The current agreement among major nations is not to intervene in currency markets and not to engage in competitive devaluations. Although the G7 attempted as recently as 2011 to devalue the yen, co-ordinated action is not in favour.

Reagan backed off from a trade war by weakening the dollar. Trump's instinct looks rather different - he already seems to be intent on pulling up barriers to trade

The US has been the most vociferous accuser of other nations in this regard, so it could hardly turn around and ask for everyone to get on board to devalue the dollar - although for this reason it might get further with co-ordinated action than if it were to try to go it alone.

A strong dollar is not only bad for US manufacturing jobs. It's also got the potential, as we've seen on many occasions in the past, to lead to crisis in emerging markets. Emerging market currencies pegged to the buck can become untethered when the dollar rises, leading to devaluations, soaring debt costs and general financial turmoil. China, which is burning through its foreign exchange reserves at an alarming rate in a bid to shore up the yuan, may be forced into a 'one-off' devaluation like the one we witnessed in August 2015 - a major global event that roiled a wide range of markets.

In the 1980s a burgeoning trade deficit fuelled protectionism. In the end Reagan backed off from a trade war by weakening the dollar. Trump's instinct looks rather different - he already seems to be intent on pulling up barriers to trade. That could further fuel the deficit if it leads to even greater dollar strength as capital flows to the US heat up on the back of the ensuing trouble in emerging markets and China. That might make revisiting Plaza more palatable.

Mr Trump may also see a weaker dollar as the primary tool for 'making America great again'. A less mighty greenback could be good for America, and the world. Mr Trump - and others - may be well advised to at least consider policies that keep the greenback's rise in check.