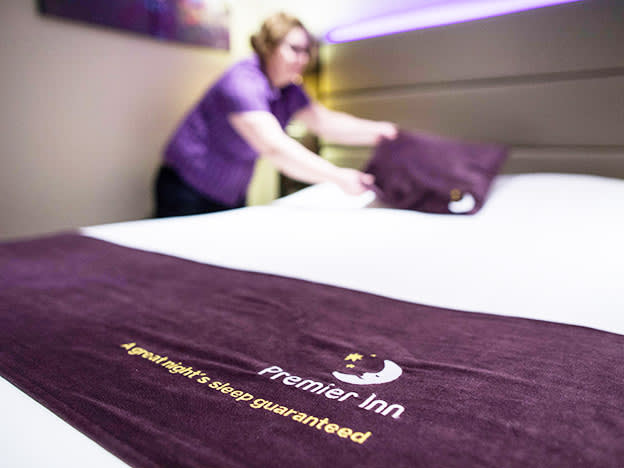 Whitbread (WTB) owns the largest and most popular hotel chain in the UK, Premier Inn. It also has a number of restaurant brands, such as Beefeater, operated in or next to its hotels.

Just over a year before the pandemic struck, the company set out major expansion plans. While Covid decimated trading in 2020 and will continue to do so into 2021, Whitbread remains a robust business at a time when many of its rivals are experiencing extreme distress. With competition on the floor, the company should have the opportunity to realise its growth aspirations quicker and more cheaply when a recovery eventually sets in.

Whitbread’s growth push got under way hot on the heels of the sale of its Costa coffee-shop chain two years ago. It extracted a bumper price of £3.9bn from buyer Coca-Cola, representing 16.4 times cash profits.

In the UK, Whitbread wants to expand Premier Inns from 78,470 rooms, as oflast October, to 110,000, while in Germany it plans to turn its fledgling, lossmaking, 2,720-room business into a 60,000-room market leader. It originally entered the German market in 2016, testing thebrand for two years with its very popular hotel in Frankfurt.

There was some scepticism about the scale of Whitbread’s ambition when its plan was unveiled. In the UK, competitors were also expanding while demand looked fairly stagnant. Meanwhile, in Germany Premier Inn needs to build significant scale and brand recognition if it is to replicate the competitive advantage it has in the UK.  However, confidence can be taken from the long-term structural growth opportunity. Branded budget hotels are gaining significant market share from those operated by independents. As the UK’s most popular budget brand, Premier Inns is winning a bigger slice of that growing share than rivals. The same dynamic can be observed in Germany where the overall market is not only bigger at 992,000 rooms versus 713,000 in the UK, but the shift to branded budget operators is less advanced.

There are several reasons why Premier Inns has a premier brand. YouGov customer surveys rank it an easy favourite for value-for-money and satisfaction, as well as a close second for quality; a potent combination.

Operational panache is also reflected in an impressive record of efficiency improvements. Cumulative cost savings of £235m have been made in the past four financial years. Meanwhile, the majority of bookings are made directly by customers, which cuts costs and complications. And while owning properties admittedly requires more upfront investment, it has the advantage of offering subsequent flexibility. The freehold to leasehold split is 60:40 but moving towards 50:50. The agility of the business was demonstrated by rapid reopenings following the first lockdown, which resulted in significant outperformance of the wider hotels market.

The benefit of brand, scale and operational efficiency has resulted in Premier Inn generating robust returns on capital employed (ROCE) over the years. The timing of investments along with some regional weakness and increased staff costs did see ROCE slip to 11.2 per cent last year, but it has been above 13 per cent in the previous four  financial years.

The pandemic has wreaked havoc on the hotels industry, with tighter restrictions caused by the new variant of the virus threatening a painful start to the new year. But while Whitbread will emerge battle scarred, it should still be fit for the fight ahead. Competitors have fared less well. Arch rival Travelodge, for example, has had to go through an acrimonious Company Voluntary Arrangement (CVA) process, which saw Whitbread cherry-pick two of its hotels. Meanwhile, although it is hard to accurately gauge how bad life has been for independents, many are expected to never reopen.

One bitter pill Whitbread shareholders have had to swallow was June’s £1bn, 67m-share rights issue – grimly ironic given the company had returned £2bn through a 40m share tender offer less than a year earlier as part of its £2.5bn Costa cash return. However, the injection of funds leaves Whitbread very well placed to maintain its hotels (this costs about £150m a year) and push ahead with growth at a time when assets are cheap, and competition is weak.

To this end, it acquired 15 German hotels late last year for a total cost of £40m, representing a bargain £20,000 per room. The speed at which it scales up in Germany will have a strong bearing on how quickly the operation realises its targeted 10 to 14 per cent return on investments. At the end of October, nearly £400m had been invested in Germany with the same commitment to the pipeline. Many more opportunities could present themselves in both Germany and the UK.

Broker Shore Capital calculates that when trading returns to more normal levels Whitbread should be able to self-finance about 6,000 new rooms a year, which includes using about £100m a year from sale and leaseback. Meanwhile, excluding lease liabilities the group had net cash of £196m at the end of October, access to £2bn of available funds and key loan covenants waived until March 2022.

For the time being, though, trading is anything but normal. The cash outflow in the six months to the end of October was £462m, albeit better than the £600m loss originally expected. The company reckons it can break even at 55 per cent occupancy with an average room rate a fifth lower than 2019 levels.

Trading and an eventual recovery should be helped by Whitbread’s focus on domestic customers (90 per cent) and regional hotels (83 per cent) where demand is expected to hold up better than in London. The fact half of revenues come from business customers is a concern, but it is exposed to a number of industries that are expected to be a focus of recovery efforts, such as construction. What’s more, history suggests Whitbread’s value for money focus may serve it well – during the financial crisis revenue from its hotels and restaurants business continued to climb.

The pandemic will inevitably continue to present major trading challenges into the new year. But as life returns to normal, there is a strong chance that investors start to focus on the fact that Whitbread’s growth ambition not only looks more credible, but that distress in its industry means that growth could ultimately prove much more profitable. And for now, based on its assets, the shares do not look expensive. Broker Shore Capital calculates that, accounting for the German business at cost, the UK estate is being valued at only a slight premium to cost at about £70,000 per room. The brand, operational excellence and growth potential should call for more once some normality returns.