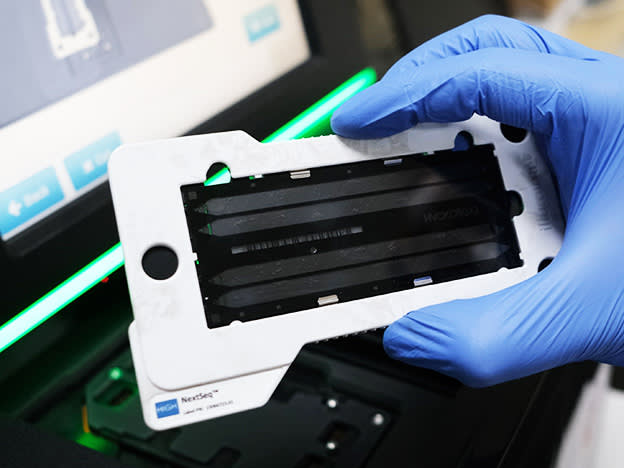 Its machines have reduced the cost of sequencing a genome by a factor of 1,000

Covid-19 has brought genome sequencing into the mainstream this year. When the virus first emerged in Wuhan at the end of 2019, scientists needed a way to quickly identify its genetic code. Samples from the first patients in Wuhan were sent to Zhang Yongzhen at Fudan University in Shanghai where there was an Illumina (US:ILMN) NovaSeq, a machine that can produce a cell’s genetic code in a matter of hours.

By 10 January 2020, the Covid-19 genome had been sequenced and the code was published online for the world to see. With this public information, scientists at Massachusetts-based pharmaceutical company Moderna  (MRNA) began work on their pioneering mRNA vaccine. It was developed within 25 days and now more than 70 countries use Illumina platforms for Covid variant tracking.

The speed of this process was enabled by the next-generation sequencing technology of the Illumina machine. When the first genome was sequenced in 2003 it took 13 years and $3bn (£2.2bn). Now the same process can be done in under an hour and at a cost of $600. Until 2008, gene sequencing costs were declining at a similar rate to computing, halving every two years, but since 2008 Illumina has reduced them by a factor of 1,000.

The future of healthcare infrastructure

The nature versus nurture debate will rage on in healthcare as much as anywhere else. However, many major health conditions including heart disease, cancer and Alzheimer’s all have strong genetic components. Genome sequencing machines that identify health issues before any symptoms arise are therefore likely to become ever-more essential in medicine and health research.

Cancer, the most likely cause of death in the US, is the obvious disease that can be tackled using this technology. Using genome sequencing, Illumina devised a blood test that can detect 50 different cancers before they are symptomatic. The test looks for the genetic material that tumours shed into the bloodstream and traces it back to its organ of origin.

Six years ago Illumina spun off a start-up, Grail, to create the blood test. But in August 2021 Illumina confirmed a deal to reacquire the company for $7.1bn. Regulators in both the US and the EU are investigating the acquisition.

The Federal Trade Commission launched the investigation on the basis that “Illumina is the only provider of DNA sequencing that is a viable option for these multi-cancer early detection, or MCED, tests in the United States”. As the dominant player in genome sequencing, there is a fear Illumina could cease supplying to Grail’s cancer test competitors.

The obvious downside of this investigation is that the deal could be blocked. However, the fact the deal is being investigated at all is proof of Illumina’s essential position in the US healthcare system.

Majority of revenue is recurring

One of Illumina’s strengths is that most of its revenue is recurring. It has three revenue streams: consumables, instruments and services. Instruments are the printer-sized machines that sequence the genome. In 2020, these made up 13 per cent of total sales.

Consumables are the bits and pieces required to make the machine work, including the microarray plates that are needed each time a genome is sequenced. Consumables made up 71 per cent of sales in 2020, up from 65 per cent in 2018. And because they are single-use, customers need to keep ordering them.

It is a business model often employed to market consumer products such as Nespresso, which sells the coffee machine to its customers but makes the real cash from supplying the coffee pods. The upside is that the initial cost of purchasing the machine provides a barrier to entry to future competition. Customers are unlikely to sink money into a new machine unless it is significantly better than the one they already have.

Growth picking up after Covid disruption

In the five years to 2019, revenue grew 90 per cent from $1.9bn to $3.5bn. However, in 2020 sales slipped back 9 per cent to $3.24bn due to issues around shipping consumables to customers. An increase in freight costs also meant that gross margins slipped 1.6 percentage points to 68 per cent.

However, business has picked back up as the world is slowly learning to live with the virus. In the third quarter of 2021, revenue was up 40 per cent year on year to $1.1bn. Gross margin also improved by 3.3 percentage points to 69.5 per cent compared with the end of 2020.

“In the first three quarters of this year they now have 50 per cent more customers and it is starting to show its applications outside of the lab,” said Torrance.

Research and development (R&D) expenses rose sharply in the five years prior to the pandemic, from $338m to $647m in 2019. But as a proportion of total sales, these costs have stayed broadly flat and came in at 18 per cent for 2019.

Illumina’s enterprise value currently stands at 13.9 times sales and its shares are priced at 89 times earnings. That’s undoubtedly punchy, but so is the opportunity. What’s more, the accounting treatment of R&D and other intangible investments mean earnings numbers do not necessarily give a fair view of the company. Making a rough-and-ready adjustment to the accounts to treat Illumina’s intangible spending in the same way as tangible investment suggests last year’s profits were understated by about two-fifths. That still suggests these are expensive shares, but not quite as achingly so as the numbers in the accompanying table may first suggest.

But it is the opportunity for this company to compound value for shareholders that is the key reason for the high rating. The global DNA sequencing market size was valued at $4.7bn in 2019 and is expected to expand at a compound annual growth rate of 11.4 per cent from 2020 to 2027, according to Grand View Research. Illumina is expensive, but given that it is a high-quality business with recurring revenues in a growing market, it’s compelling.