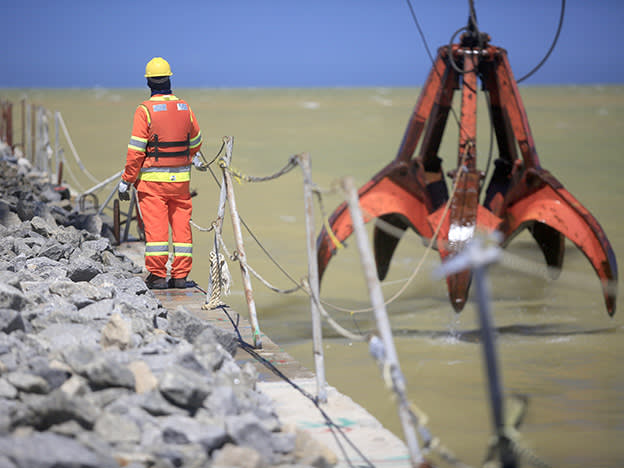 Anglo American has further to run

Shares in the mining giant have had a stellar run. This doesn’t mean the run is nearly over.

The FTSE 100 is sometimes derided as a graveyard for dated business models eking out modest returns on capital. Whether that view is fair is a moot point. But it might come as a surprise to note that one of the index’s ‘old economy’ constituents – resources giant Anglo American (AAL) – has outperformed the S&P 500 on a total return basis over one, two, three, five and 20 years.

For those investors who don’t follow the mining sector closely, it might be even more surprising to learn that the reward for this track record is a bargain basement valuation. Despite climbing a third so far in 2022, Anglo's shares are priced at eight times forecast earnings for the coming 12 months.

That’s below the five-year average of nine and translates to a price/earnings growth ratio of 0.6, suggesting the market has not been bullish enough about the prospects for near-term cash flow.

Then again, the market might be right. Over 10 years, a total return comparison with the blue-chip US index is less flattering than the comparisons above. This is in large part due to the massive equity destruction witnessed in the first half of the 2010s, as years of huge industry investment collided with falling Chinese resource demand and an even sharper fall in commodity prices.

Overleveraged balance sheets like Anglo’s were almost wiped out before prices bottomed in 2016 and a new demand cycle began. Memories of this pain likely accounts for some of the investor caution. A stuttering post-pandemic economic recovery, and an uncertain outlook for resources given the stuttering Chinese economy and property market, provides some grist for those who see another precipice ahead.

On balance, however, there are three good reasons for investors to remain overweight resources stocks right now, and Anglo American in particular.

Working out where a business sits in the economic cycle is fiendishly hard, and best done with hindsight. But there are lots of good reasons – from the likely availability of equity and debt finance, to the prospect of future demand growth – why investors should pay attention to cycles.

This is especially true of resources companies, which need to find logistically and geologically viable projects without under-playing long-term costs or over-estimating long-term prices.

When this goes wrong, it can be acutely painful. Between 2012 and 2016, for example, Anglo was forced to make $23bn (£18bn)-worth of impairments to its asset base after adjusting its long-term commodity price assumptions. Shareholder equity more than halved during the period, and even sparked doubts about the group’s ability to service its debts.

In recent years, giant miners have been much more disciplined – or overly hesitant, depending on your view – when it comes to committing capital. Now, they simply cut debt and pay dividends. In a recent note to clients, analysts at Bernstein pointed to the lack of exploration and capital expenditure as “symptoms of longer duration failings” and evidence that large producers haven’t taken rising prices and margins as a cue to increase their spending and raise output.

But while anticipating the success of multi-decade investments is notoriously hard, it is necessary work. And on this score, Anglo has been more committed and consistent in its spending than either Rio Tinto (RIO) or BHP (BHP), as the chart below shows.

Of course, relative spending levels aren’t the same as returns on invested capital. Rio’s iron ore operations in the Pilbara region have proven so profitable that replacement capex pays for itself in a few years. By contrast, its Oyu Tolgoi copper project in Mongolia has proven much more of a drag.

What matters for Anglo and its shareholders is that it has charted a course for growth. By 2030, copper-equivalent output should be 35 per cent higher than 2021 levels. That’s a faster pace of growth than the past nine years, during which time production climbed 10 per cent despite a scaling back of the portfolio from 68 to 37 mines.

A sharper focus on higher-quality assets has been complimented by a more considered product mix.

Most notably, this has meant exiting thermal coal, via the spin-off of Anglo’s South African operations (now Thungela Resources (TGA)) and the sale of a minority interest in the Cerrejón project in Colombia to Glencore (GLEN). Whatever your take on the short-term impulse for these sales – and the sustainability credentials of the assets’ new owners – it makes long-term sense to get rid of a heavily-polluting fuel in decline.

The first of these will receive a major shot in the arm later this year when the Quellaveco mine in Peru begins production. Billed as “one of the world’s largest untapped copper orebodies”, the tier-one project is expected to produce 300,000 tonnes of copper equivalent a year in its first decade.

With some of the lowest costs on earth, Quellaveco was initially expected to pay for itself by 2026. Now, four years after receiving the green light, copper prices are up from less than $3 per pound to almost $5. For Anglo, partner Mitsubishi and the Peruvian government, it looks set to be a cash cow.

Just as copper demand is primed to step up amid the coming energy transition and the electrification of the global economy, PGMs stand to benefit from heightened demand from a changing automotive sector. And as with its copper portfolio, Anglo has large investment opportunities to grow a division which generated $7.1bn of cash profits in 2021.

A scramble for non-Russian PGM supplies is likely to a positive for sales and margins in the coming years. Ditto diamonds, in which Anglo has a leading position through its ownership of De Beers.

In the long term, the same is likely to be true for the group’s bet on crop nutrients, given the sway exerted by Russia and Belarus over the potash market. Although investors should brace for cost over-runs at the Woodsmith polyhalite mine, the past few months have underlined the critical links between geopolitics and food security. The £405mn acquisition of Sirius Minerals could yet prove to be a bargain.

It certainly looks like a more differentiated product mix than those of Rio or BHP, whose heavy exposures to iron ore and petroleum, respectively, feel more suited to past China-led cycles.

However, even Anglo’s peers could soon benefit from a reappraisal of the virtues and pitfalls of mining. Profits may no longer dictate the impulse of resource exploration and capital expenditure, and must now instead be balanced against an ever-expanding list of stakeholders. Still, it seems doubtful that the large discount rates applied to resource projects will remain in perpetuity.

Given its long history of pollution and destruction, the sector may have earned its reputation as a bad steward of the natural commons. But if we are to address climate change, let alone meet the growing expectations and aspirations of developing economies, then mining will be required.

After all, if ESG investors can get on board with arms manufacturers, you’d hope they can forgive copper extraction. For a stock like Anglo, it doesn’t matter if the pivot is practical, sincere or cynical. Whether investors either wake up to the resources required for the energy transition, or belatedly seek commodity exposure as a hedge to inflation, the pay off is likely to be another leg in a multi-year momentum trade.

No investor should pretend that Anglo's shares are without risks. Although its margins are presently wide, these could narrow quickly if the global economy adds recession to multi-decade high inflation. Resource nationalism remains an ever-present threat. Should the current commodities gravy train run on too long, calls for windfall taxes or backdated climate redress payments are likely to grow. This week, chief executive Mark Cutifani stepped down after almost a decade reshaping the group.

But Anglo is a well-diversified, growing, scale player in the world’s primary economy. Don't let recency bias get in the way of today's evidence.