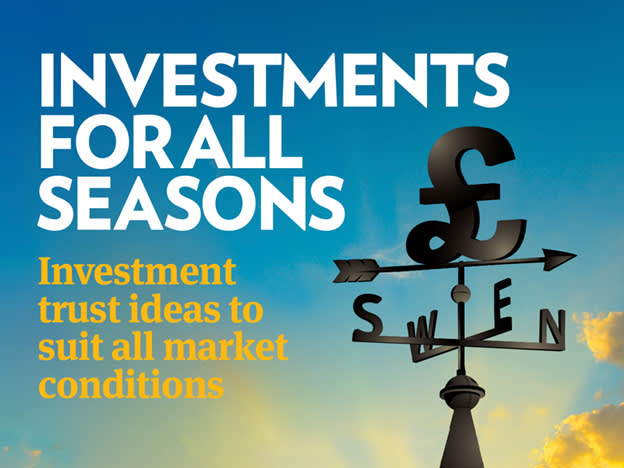 Our two investment trust income portfolios also experienced volatility over the 12 months to 30 September. But they both made a positive return and maintained a good yield. Well-diversified asset allocations and strong performance from individual portfolio holdings helped them achieve this result.

Mr Liddell’s portfolio is focused on core UK equity funds, but also has exposure to other equity markets, with global equities accounting for 20 per cent of it, alongside allocations to high-yield bonds, infrastructure and commodities trusts.

BlackRock Commodities Income Investment Trust (BRCI) was the star of the show, with a 16.9 per cent share price total return over the period. Mr Liddell only allocated 5 per cent of his portfolio to this trust, so its contribution to the overall portfolio return of 1.54 per cent was only 0.85 per cent. Its yield of 5.56 per cent was helpful and above its five-year average of 4.73 per cent. Mr Liddell expects commodities to bounce back over the year, given how badly the fund did between 2016 and 2017 when its return was 0.1 per cent. “Things that have performed badly quite often bounce back and vice versa," he adds. "BlackRock Commodities Income was quite cheap a year ago, so it doesn’t surprise me that it performed well. But it will always be volatile.”

This offset a loss for Murray International Trust (MYI). The trust's return was hindered by a lack of exposure to the US and some heavy bets in emerging markets, in particular Latin America. Despite losing 7.5 per cent and detracting from the overall portfolio return by -0.94 per cent , it still provided income worth £493.94, a yield of 3.95 per cent on the a £12,500 investment. And because Mr Liddell had reduced his allocation to Murray International in 2017, it limited the impact.

He says: “It’s been a bad performer this year, but last year had performed quite well, so I reduced the holding. It's now trading at a discount to net asset value (NAV), but its manager, Bruce Stout, is longstanding and experienced. The trust also has a good dividend record and an attractive yield.”

Another trust that performed well is Aberdeen Diversified Income and Growth (ADIG), a new entrant into Mr Liddell’s portfolio in 2017. This multi-asset trust invests in other funds and investment trusts, and has about 40 per cent of its assets in bonds, 5 per cent in property, 6 per cent in alternatives and the rest in equities. Its diversified strategy has worked as the trust made a share price total return of 7.86 per cent over the 12 months to 30 September. A 5 per cent weighting in Mr Liddell's portfolio meant it made a contribution of 0.39 per cent. Over the period, its yield was 4.35 per cent, in line with its five-year average of 4.39 per cent.

Despite equities accounting for a third of Mr Liddell’s portfolio, the allocation to alternative investments really helped over the period. Two of the highest performance contributions came from NB Global Floating Rate Income Fund (NBLS), which invests in bonds whose income rises in line with interest rates, and HICL Infrastructure Company (HICL), which mainly invests in government-backed infrastructure projects. These were added to Mr Liddell's portfolio last year and contributed 0.62 and 0.42 per cent respectively to the overall portfolio return, and 17 per cent and 13 per cent to the income.

iShares UK Dividend UCITS ETF (IUKD) also contributed a higher percentage proportion of the portfolio's income – 19 per cent – than its weighting in it of 15 per cent. The exchange-traded fund (ETF) had a yield over the period of 5.95 per cent. But it only made a total return of 1.12 per cent and a portfolio contribution of 0.17 per cent.

Mr Liddell’s portfolio performed quite well given its significant tilt to UK equities, on which four out of 10 holdings are focused. Three of his holdings are not exposed to equity markets. “With hindsight, the portfolio would have been better off with more US exposure and less emerging market exposure, and probably more bond exposure," says Mr Liddell. "This is what has really performed well over the period.”

But he argues that this was still an appropriate asset allocation as he is bearish on US equities and thinks UK equities are good value as they have declined due to Brexit uncertainty. “My views are much the same as last year," he explains. "The starting point is that to achieve a higher yield in this portfolio we have to keep a big chunk in equities as low-risk bonds are not going to get us there. Although there are evident risks facing UK stocks, quite a lot of that is priced in. This, combined with the risk of sterling appreciation, will knock the value of international holdings if we get a good Brexit deal. I am not that bullish about anything, but there is relative value in the UK. Domestic large-cap stocks have a large amount of foreign earnings, which gives some protection against a bad Brexit. Although if things go well, UK domestic stocks should perform. You never get a free lunch, but that is why I continue with a weighting to UK equities.”

The most significant change in the portfolio is the removal of HICL Infrastructure Company and the addition of John Laing Environmental Assets (JLEN), but with a slightly lower allocation of 10 per cent. Mr Liddell says that although HICL has performed well, political risks relating to its investments in private finance initiatives (PFI), which were abolished by the government last month, led him to exclude the fund.

“I brought HICL in as a diversifier with a high yield, and it has done the job," he says. "But there are more political risks around these sort of trusts now, and I don’t want to be in a situation where we have a bad Brexit outcome or a Jeremy Corbyn government and the trust comes under pressure."

He has increased the weighting of Aberdeen Diversified Income and Growth Trust to 10 per cent, and reduced the allocation to NB Global Floating Rate Income to 10 per cent. And he has reduced the weighting of iShares UK Dividend UCITS ETF from 15 per cent to 12.5 per cent, so that it is no longer the largest component of the portfolio. He has increased the allocation to Edinburgh Investment Trust (EDIN) from 10 per cent to 12.5 per cent. The table below shows how David Liddell's new portfolio would have fared over the 12 months to 30 September 2018.

Source: FE Analytics, *Replacement for HICL †Based on a new holding

Mr Moore’s portfolio is very different to Mr Liddell's. It has a focus on high-yielding alternative assets and limited exposure to equities. He does not include any UK equity income trusts, but does have exposure to more esoteric assets such as leasing receivables via SQN Asset Finance Income Fund (SQN) and collateral loan obligations (CLOs) via Fair Oaks Income (FAIR). Overall, his portfolio only has 25 per cent in equities, with 30 per cent in property, 30 per cent in bonds and 20 per cent in alternatives.

The best-performing trust in Mr Moore's portfolio was TwentyFour Income Fund (TFIF), with an 8.14 per cent share price total return. But with only a 10 per cent allocation in the portfolio its return contribution was 0.81 per cent. The trust provided £614 of income from an allocation of £10,000 and had a yield of 6.14 per cent. This accounted for nearly 11 per cent of the income – slightly above its 10 per cent portfolio allocation.

The best portfolio contribution came from Picton Property Income (PCTN) at 1.11 per cent. It accounted for 15 per cent of Mr Moore's portfolio. However, its yield of 4.08 per cent was below its five-year average yield of 6.04 per cent. It made an income contribution of 10.7 per cent.

The highest income contribution came from NB Global Floating Rate Income Fund (NBLS), which invests in floating rate bonds. “Investors need to have a mix of different types of assets, but on the bond side you do not want fixed rate as yields rise, you want floating rate," says Mr Moore. "And as rates rise, the income from this trust will rise as well.”

NB Global Floating Rate Income Fund provided 17 per cent of the income, even though it only accounts for 15 per cent of Mr Moore's portfolio. It yielded 6.49 per cent over the period, slightly above its five-year average of 6.16 per cent. The trust made a 4.98 per cent share price total return over the 12 months to 30 September, and a return contribution to the portfolio of 0.75 per cent.

The best-performing trust in Mr Moor's portfolio was TwentyFour Income Fund (TFIF), with an 8.14 per cent share price total return

Mr Moore added Fair Oaks Income last year, which buys baskets of loans where the interest rates rise with central bank interest rates. This had the highest yield of all the portfolio constituents over the given period, at 17.78 per cent, although slightly below its four-year average of 18.22. It provided income of £889, which accounted for 15.55 per cent of the portfolio's income. It made a share price total return of 5.37 per cent over the period.

Mr Moore was pleased with International Public Partnerships' (INPP) performance, which is a core holding, accounting for 15 per cent of his portfolio. It also provides asset class and geographic diversification. And although he has made some changes he has stuck with his focus on high-yielding alternative assets, alongside some equity trusts to boost returns, balance risk and diversify income.

He has removed UK Commercial Property REIT and partly replaced it with a 5 per cent weighting to Tritax EuroBox (EBOX). The trust only launched in July this year, but has a similar strategy to UK-focused Tritax Big Box REIT (BBOX) of which Mr Moore is a fan. Tritax EuroBox will invest in warehouse buildings in continental Europe.

“The UK commercial property market has risks associated with Brexit, and UK Commercial Property REIT also has exposure to retail, which is having problems," explains Mr Moore. “Tritax Big Box REIT has done very well, and Tritax EuroBox has started making acquisitions. It gives exposure to what has done well in the UK – warehouses near road networks. But in Europe there are 500m people, rather than 65m, and it has a larger motorway network. Tritax EuroBox hasn’t started paying dividends, so I am giving it a low weighting, but will consider increasing it in future when we have more confidence.”

He has also removed Picton Property Income, which converted to real estate investment trust (Reit) status earlier this year. Its 15 per cent allocation has been reassigned to LXI REIT (LXI) for better exposure to long-lease commercial property with inflation-linked rents. “We want to make sure that as interest rates and inflation rise, our income is secure," says Mr Moore. "Picton did not have as much ability to pay better dividends in line with inflation.”

The table below shows how Mr Moore's new portfolio would have fared over the 12 months to 30 September.<BOXOUT>

The most recommended investment trusts