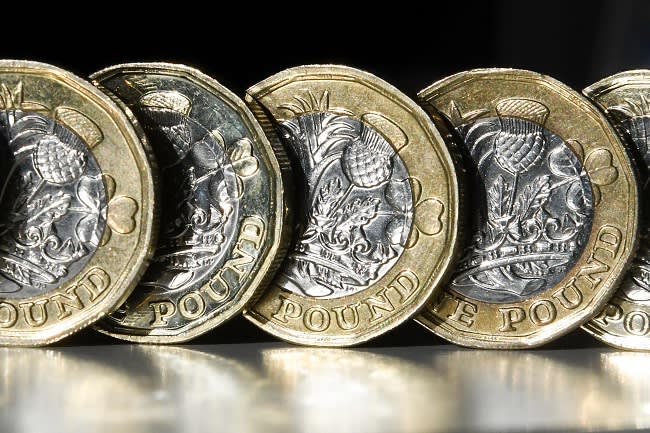 Does sterling's level predict annual changes in the FTSE?

The strong pound is no reason for anyone to change their equity portfolios.

The pound is back in favour. Sterling’s trade-weighted index (TWI) has risen to its highest level since just before the vote to leave the EU in 2016. This has mixed blessings for equities.

The bad news is that a strong pound, if it persists, would reduce the sterling value of earnings made in foreign currencies. It would also squeeze the profit margins of UK companies competing against overseas ones – although many of these firms are smaller unquoted ones.

But there’s good news too. A stronger pound means cheaper imports. That doesn’t just reduce companies’ costs. It can also boost domestic demand: if we’re paying less for imported food and fuel we have more money left over to spend on domestically-produced goods and services.

Lower import prices aren’t the only way in which a stronger pound reduces inflation. It also forces UK firms competing against imports to hold down their prices. And if inflation is lower, there’s less need for interest rates to rise.

Back in the 1980s and 1990s economists had a rule of thumb that a 4 per cent rise in sterling’s trade-weighted index was equivalent as a monetary tightening to a one percentage point rise in interest rates. The Bank of England itself always rejected this rule, but the general idea holds: sterling’s eight per cent rise since last spring postpones the need for a rate rise. This is good news for cyclical stocks such as housebuilders as it means these now have less reason to fear that higher rates will reduce growth. And it’s good for equities generally as it means that the “reach for yield” – which has seen investors buy shares simply out of despair at the lack of return on cash – won’t go into reverse very soon.

There’s something else. Because it is a risky asset, sterling is a barometer of investors’ appetite for risk. In recent years there has been a tendency for sterling and equities to rise and fall together, with cyclical stocks doing especially well when the pound rises. During the worst of the financial crisis and at the start of the pandemic, for example, the pound fell. And it’s no accident that its revival since the autumn has coincided with increased hopes of a post-Covid recovery.

Again, this is a mixed blessing. On the one hand, the same taste for risk that has boosted sterling is also supporting equities. On the other hand, though, a stronger pound might be a sign that investors’ appetite for risk has risen too much – that they’ve become irrationally exuberant. If so, then it predicts that equities will fall.

All this raises the question: how can we weigh the upsides of a strong pound against the downsides? To put this another way, how can we tell which of these effects is already in the price or not? There is always a danger – in other contexts as well as this one – that investors buy and sell stocks on information that is already in the price, thereby becoming mere noise traders.

The solution here lies in simple statistics. I asked: does the level of sterling’s index predict annual changes in the All-Share index or in particular sectors?

In many cases, the answer is no. For example, since January 1999 the correlation between sterling’s index and subsequent annual changes in the All-share index has been minus 0.12. That means shares have been slightly more likely to fall than rise after sterling has been strong, but the link is too weak to act upon. Much the same is true for most other sectors.

There are a couple of exceptions here. Some cyclical stocks – most notably in the support services sector - tend to fall after sterling has been strong, whilst some defensives, most notably tobacco, tend to rise. This is consistent with a strong pound sometimes being a sign of excessive exuberance and hence that cyclicals have become over-priced and defensives under-priced. But even in these cases the signal from sterling’s isn’t hugely strong.

Of course, these numbers tell us only what has been the case in the past. But they are generally consistent with common sense. The implications of a particular exchange rate for shares should be priced in quickly, and so sterling should have no predictive power. Yes, the efficient market hypothesis is sometimes wrong – but it isn’t always so.

The answer to the question: “what should investors do about the strong pound?” is therefore “nothing”, except to be slightly cautious about cyclicals – the more so if sterling keeps rising. This might seem a feeble conclusion. But it’s not. Knowing when to do nothing is a useful skill in investing, as it is in life generally.