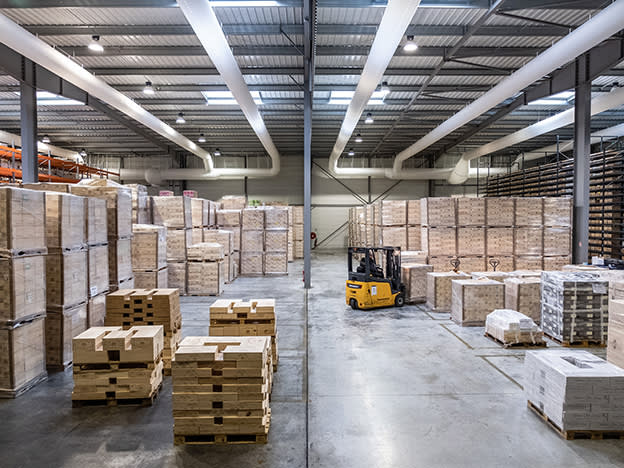 Real estate investors are clamouring for exposure to the logistics sector. Those seeking to capitalise on the acceleration in ecommerce and renewed focus by companies on strengthening supply chains post-pandemic and Brexit are willing to pay higher prices for assets.

Cash is also being ploughed into new sites. Warehouse development is on course for a record year in 2021, with 40m square foot (sq ft) in space larger than 50,000 sq ft under construction, according to the real estate services group. That is more than double the amount completed in 2020. Yet most of the space under development is already committed as retailers and distribution companies have opted to satisfy their needs through “build-to-suit solutions”, it said.

“There’s a wall of capital trying to get in and there’s not that many that really want to sell,” said Johnny Hawkins, UK capital markets partner at Knight Frank. Investors have been attracted to secure income streams as demand for ecommerce has accelerated demand for warehouse distribution sites, he said.

For UK-listed real estate investment trusts (Reit), rising rents have also fed through to impressive net asset value growth. Investors are banking on the pace of those increases continuing, with shares in specialist Reits such as Segro (SGRO) and LondonMetric (LMP) trading at premiums to both the last reported and forecast NAV.

Urban Logistics (SHED) chief executive Richard Moffitt said the demand for the faster delivery of products had led more companies to widen their distribution footprint. “Everyone gets excited about Amazon, but the reality is what you see now is a structural shift in the way we now procure our goods,” he said.

The Reit had experienced “a real clamour” among occupiers to extend leases over the past six months, as companies have sought to make their supply chains more sophisticated following the pandemic and uncertainty of Brexit. “They can see that if rents are going to be on the rise, they may as well lock in now to a longer lease,” he added.

What’s more, competition for space from occupiers means that it managed to settle around 80 per cent of rent reviews in advance of the lease date, he said. “Sometimes a tenant can see that the evidence is getting stronger and they’re not going to move anywhere,” Moffitt added.

In March, prime distribution space was the only property type where rising asset values drove down the average investment yield to below where it was a year earlier, according to data from Knight Frank. The average yield stood lower than prime offices in the City of London and in line with stores on the capital’s Oxford Street last month.

Yet as property values in the sector touch new highs, is there a danger that recycling assets and finding new investment opportunities will come with lower returns attached?

The investment yields attached to prime distribution assets are getting to the point where they will probably start to stabilise, said Hawkins. “Because it has sharpened so much that there’s only so far it can go before people start looking at other sectors,” he said.

Moffitt said Urban Logistics was naturally having to pay more for assets, particularly as the “people buying shops on Bond Street” had turned their attention to the previously unfashionable warehouse market. “It’s quite amusing to see them clamouring for assets and trying to get into our world,” he said.

However, he points to the fact that the Reit bought space at an aggregate net initial yield of 6.2 per cent over the past 12 months, but sold a £30m portfolio of five sites at a yield of 4.8 per cent at the end of March. What’s more, assets are acquired at between 30 and 70 per cent of what would be the cost of replacing them on the market.

Investing in refurbishing sites, which can include improving energy efficiency and conducting brownfield development are both ways to add value, he said. “A lot of the institutional platforms that have been set up to buy the sector, to a large extent they’re just buying the market,” said Moffitt.

Total returns generated by UK industrial and logistics property over the next five years are expected to average 7 per cent a year, outpacing all other types of real estate, led by London and the south-east. Those returns will partly be generated by increased competition for space as the supply of vacant space remains tight.

There is around 46m sq ft of vacant space currently available across the UK, according to Knight Frank, which represents 10 months’ worth of supply at current take-up levels.

While investors may be paying a sharp yield, it’s probably one of the only sectors where you’re seeing positive rental growth, said Hawkins. “That income is durable and it’s not going anywhere,” he said.

With the structural decline in retail rents accelerating and future demand for office space still unclear, reliable sources of rental income are in shorter supply. There is reason to be bullish about all UK-listed logistics landlords. Smaller players Warehouse Reit (WHR) and Urban Logistics may not have the scale of their larger counterparts, but they offer exposure to solid potential earnings growth and generous dividends at a marginal discount to forecast NAV at the end of March next year.