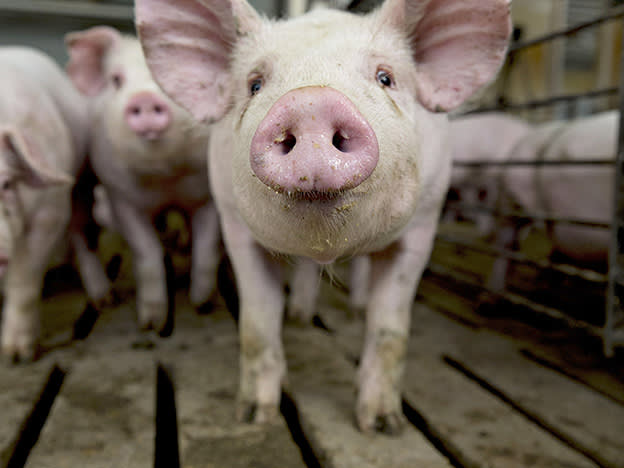 ‘Virus’: a word that is rarely heard these days without the prefix ‘Corona’.

The pandemic has, understandably, topped the news agenda over the past 16 months as governments and the scientific community strive to stem the spread of infection and save lives.

Turn to the animal kingdom and a range of illnesses persist in various species, their progress unfettered by the dawning of a devastating global crisis.

African Swine Fever (ASF) is one such epidemic. Sweeping across China in 2019, the virus more than halved the nation’s pig sow herd – wreaking havoc in a country which had previously hosted 50 per cent of the world’s total pig population.

But such destruction has proved advantageous to food producer Cranswick (CWK). Export revenues for the FTSE 250 group constituted a tenth of full-year sales, buoyed by a 6 per cent improvement in Far East export volumes.

Even with the suspension of two of Cranswick’s processing plant licenses in the third quarter, flexible production at its other facilities allowed the company to keep sending pork products to China.

There had been positive suggestions that ASF was under control last year in China, Cranswick said as it posted its figures for the 12 months ending 27 March. But signs that the Chinese pig herd was being rapidly rebuilt “have faded”. The disease has reared its head again.

In any case, quite apart from the shorter-term market conditions presented by the ASF disaster, “we shouldn’t forget that China has always been a huge importer of pig meat”, chief financial officer Mark Bottomley told Investors’ Chronicle.

Animal health is a concern both on land and at sea: a point captured by the latest half-year numbers from Aim-traded Benchmark (BMK), which develops products to improve the yield and physical condition of farmed fish.

‘Health’ might be the group’s smallest business, with revenues of just £2.3m, but there are opportunities on the horizon. The group is making “particular progress” towards the launch of new sea lice treatment BMK08 and CleanTreat – with the first customer agreements signed and the safety of the product confirmed by a ratification under European law. The commercial launch remains subject to clearance in Norway.

BMK08 and CleanTreat could be “transformational” in “addressing the biggest biological challenge in salmon farming”, Benchmark has said in the past.

Overall revenues for Benchmark rose 6 per cent – buoyed by growth of 12 per cent in its advanced nutrition business.

The majority of global demand for shrimp stems from restaurants and catering businesses – meaning there was an inevitable drop-off in demand as people stayed at home under government mandates. This was bad news for Benchmark last year, given that a sizeable proportion of its sales stem from shrimp.

But things are looking up, the group said, amid an easing of pandemic restrictions in Asian markets.

Benchmark also comprises a fish genetics business; an aquaculture peer to porcine and bovine specialist Genus (GNS), one might venture. Revenues of £22.1m here were slightly lower year-on-year as better salmon egg sales were tempered by lower revenue from harvested fish and royalties. Still, management said it had “good visibility” for the rest of the year.

On top of disease containment and the preservation of animal health, both Cranswick and Benchmark are aware of the rising need to address environmental concerns. “ESG (Environmental Social and Governance) continues to be an important focus through the positive impact of our products and solutions on the sustainability of aquaculture”, Benchmark said in its earnings report.

Management noted that CleanTreat removes all of the medicinal residue from salmon bath treatments, preventing treatments from being discharged into the ocean – “revolutionary” from an environmental perspective.

Pork and poultry company Cranswick hopes to be the world’s most sustainable meat business. It wants to achieve net zero emissions by 2040 and recently retained its ‘tier one’ status in the global ‘Business Benchmark on Farm Animal Welfare’ for the fifth year in a row.

This wasn’t the group’s only consecutive achievement. Cranswick raised its full-year dividend by almost 16 per cent to 70p, marking 31 years of unbroken pay-out growth.

Such a hike came as the group posted revenue growth of 13.9 per cent to £1.9bn overall, with adjusted operating profits up more than a quarter to £133m. Net debt dropped 37 per cent to £92.4m.

Brokerage Investec expects adjusted EPS of 215p for Cranswick in FY2022, up from 199p in 2021. That gives a forward price/earnings multiple of 18 times. A promising outlook keeps us bullish on Cranswick; we remain neutral on Benchmark for now.