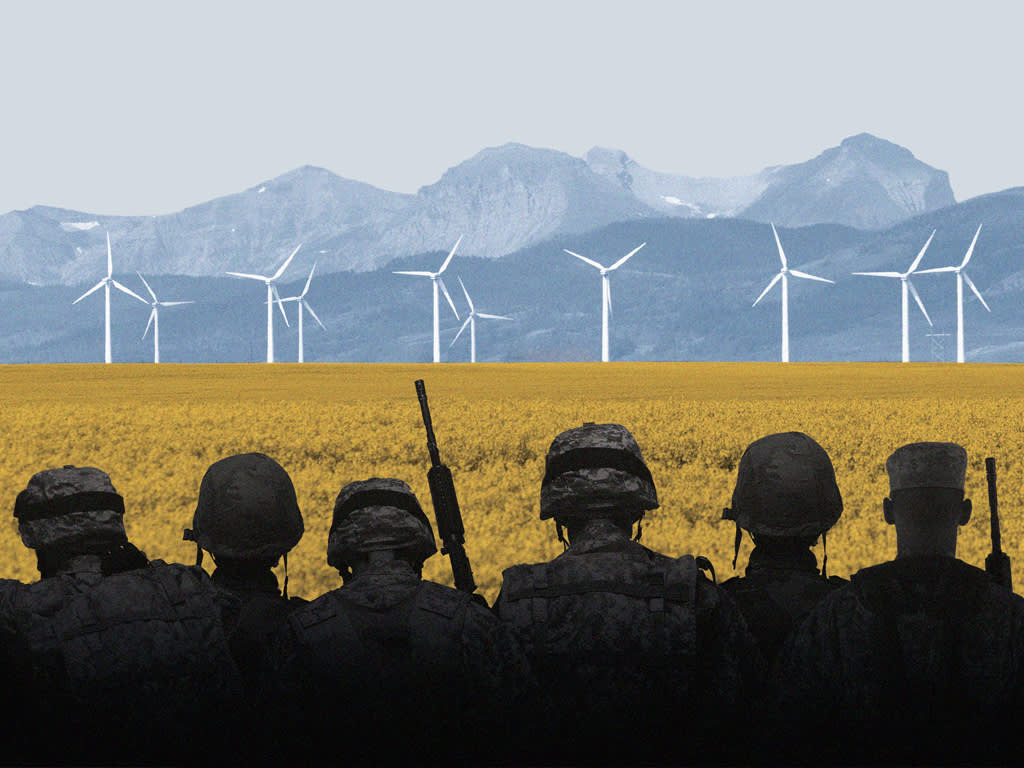 What does a changing world mean for ESG?

The western world’s defence and energy policies face significant changes in light of Russia’s invasion of Ukraine, but the shifts they imply for sustainable investment practices are more complex than they first appear

The war has led to several analysts suggesting defence companies might now qualify as buy options for those who prioritise environmental, social and governance (ESG) factors in their investment processes. With that in mind, one Swedish bank, SEB (SW:SEB.A), has attracted particular attention for reversing its year-old policy of banning investment in defence stocks. But asset managers look unlikely to follow banks in returning so quickly to deadly weapons. “I have not heard of any others that have done so,” said Hortense Bioy, global director of sustainability research at ratings agency Morningstar.

Among fund firms, formal or informal policies prohibiting investment in the manufacturers of controversial weapons comfortably pre-date ESG’s rise to prominence. Even professional investors not subject to such strictures have proved unlikely to count such companies among their holdings: a 2017 study by Morningstar found just 6 per cent of 100,000 funds globally had positions in producers of controversial weapons such as cluster bombs and landmines.

Separating the production of those weapons from those that defend Europe’s borders has not been a task that many fund managers have been willing to take on, either. And with the Russian invasion having also heightened the focus on other conflicts, any sustainable fund looking to buy the likes of BAE Systems (BA.) risks campaigners asking why they are funding the export of arms to Saudi Arabia.

“It’s unlikely ESG funds will change their stance on defence,” Bioy summed up.

Defence companies will console themselves with the knowledge that plenty of other investors are returning to their ranks, their share prices having risen markedly this year in anticipation of increased orders from nervous governments. Financing may also prove easier to come by, if banks’ lending arms warm to the sector as some of their analysts and internal funds have done. But banks too must answer to shareholders, and those investors remain resolute in their stances for now.

Other changes appear more likely, despite ESG investors’ insistence that the current crisis merely strengthens the importance of shifting to greener energy sources. They point to the lessons of the 1970s, which suggest rising oil prices will act as a catalyst for further investment in renewables – even if it will also spur on greater fossil fuel production in the western world in the months ahead.

The UK government has attempted to pursue both paths, meeting with chief executives of oil and gas companies ranging from BP (BP.) and Shell (SHEL) to Harbour Energy (HBR) in a bid to accelerate North Sea production, at the same time as prime minister Boris Johnson called for the country to “double down” on green energy over the longer term.

This longer-term focus remains at the forefront of ESG investors’ minds. Of the asset managers that Investors’ Chronicle contacted for this article, all of whom run popular sustainable UK equity mandates, none said they were changing their policies as a result of the crisis.

That may disappoint those who argue the short-term social imperative is to help oil and gas producers in order to limit the effects of rising energy prices. Yet in many cases, help may not be required: commodity prices, including oil, were on the rise well before the Russian invasion, meaning many producers and explorers are flush with cash, have seen their costs of capital reduce, and are already rolling out growth plans. Aim-traded North Sea gas producer Kistos (KIST), for instance, bought a stake in several Scottish gas fields from France’s TotalEnergies (FR:TTE) in January for an initial $125mn (£96mn) in cash.

Like many in the oil and gas sector in 2022, Kistos likes to tout its own green credentials. And while ESG investors may not be the ones pouring money into oil and gas exploration in the short term, there is evidence to suggest asset managers were already recalibrating their horizons in relation to the energy transition.

Sustainable firms that invest in fossil fuel companies are regularly subject to accusations of greenwashing. They argue those complaints have at their core a misconception: while ethical or socially responsible investing (SRI) does exclude particular sectors and stocks, and impact investing focuses specifically on achieving measurable positive effects, ESG investing is best understood as a risk management tool.

That is not inconsistent with investing in businesses that are themselves transitioning to greener practices. Big investors such as Aviva (AV.) are increasingly talking about engagement, ‘buying brown to go green’, as a means of boosting both investor returns and the energy transition itself. RBC analysts echoed that sentiment in a note written prior to the invasion of Ukraine, saying last month “the tone has shifted dramatically” when it came to interest in funding companies that are “shades of brown”.

RBC went so far as to state: “We believe the majors could, in the future, be seen as ESG darlings… the rate of transition should be the yardstick we judge the companies on, not only for the energy majors, but also for other carbon-intensive industries”.

“There is also going to be more pressure from European governments for these companies to transition.”

But European policymakers had also opened the door to compromise measures prior to the invasion. Earlier this year, European Commission put forward certain nuclear and gas activities to be included in its sustainable finance classification system, as “transitional activities”, to the dismay of some campaigners. Liberum analyst David Hewitt said this was a major shift in European thinking, given a year ago including gas would have been "too toxic for the European project to bear".

The first half of the EU’s ESG rules – the Sustainable Finance Disclosure Regulation (SFDR), introduced at the start of 2021 – has already prompted a wave of assets to shift into funds categorised as 'dark green' or 'light green', at the expense of traditional products.

As a result, the need to qualify for these SFDR categories is already influencing fund managers’ investment decisions. The latest classification plans suggest investing in gas and nuclear can co-exist with these structural forces. It remains to be seen whether defence companies, who have themselves lobbied for inclusion in the ‘taxonomy’ for several months, have similar joy.

In the short term, the political focus will be on governments to alleviate the cost-of-living crisis through more direct means, by cutting taxes, improving benefits or subsidising certain costs. That has already happened in New Zealand, where fuel taxes and road charges were slashed this week, and public transport fares halved. Some private investors will be watching closely for other developments: Aim-traded Jadestone Energy’s (JSE) planned purchase of an offshore oil field has been held up for more than two years pending New Zealand government approval.

But the war raises questions for sustainable investing beyond the types of company investors hold, or the ways that governments approach the energy transition. If ESG is a framework for assessing risk, in contrast to ethical investing’s exclusionary approach, that difference has been poorly communicated to the layperson. The truth often lies somewhere inbetween – some risk-based approaches can translate into exclusions, as the approach to defence stocks shows. And the reaction to Russia’s invasion risks throwing up further inconsistencies.

Some asset managers say they divested from Russia as a result of increasing risks: irrespective of ethics, the west’s sanctions mean investing in Russian assets is now logistically impossible in many cases, and even a sudden resolution to the war might not change that. But other fund houses have explicitly drawn parallels between ESG investing and avoiding Russia for ethical reasons. “I don’t know how you could say you’re an ESG investor and stick with a country that invades its neighbour,” Abrdn (ABDN) chief executive Stephen Bird told the Financial Times on 1 March.

The war has also prompted many private investors to think harder about their positioning. Some bought – or attempted to buy – heavily discounted Russian equities in response to the crisis: Evraz (EVR) and Polymetal (POLY) have appeared in platforms’ most-bought lists this month. Yet interactive investor research found 54 per cent of survey respondents said they had become more conscious of how their money is invested in the wake of the war.

These developments suggest a precedent has been set, but setting out a consistent line may prove more difficult, with other potential conflicts. If China were to invade Taiwan, asset managers and companies may face similar public and political pressure to divest or write down their positions.

China accounts for a much larger proportion of the average investment portfolio – and of the average company’s revenues – meaning the consequences for bottom lines would be far greater. Not divesting, however, would open up ESG-minded investors and companies to accusations that they are inconsistent in applying principles. Critics would view that as discrediting companies’ commitment to the 'S’ and ‘G’ of ESG, just as their efforts on ‘E’ face separate claims of greenwashing.

Bioy said the ESG industry was “struggling” to take into account the idea that countries themselves might need to be assessed as part of their processes – in part due to a current reliance on models at the expense of qualitative factors.

“The ESG community is struggling right now to make sense of what’s happened. The idea of an autocratic state [is difficult]. There are some asset managers who said they considered this concept a governance risk, but [outside of that group] no one had really factored that into their analysis.”

The answer, said Bioy, is for investors to acknowledge the limitations of the ESG frameworks that have helped spur on the sustainable investing boom, and to remind themselves of some of the simple tenets of investing.

“Every ratings agency, every manager has their own methodology. When you apply a methodology you have rules. This is why it’s so important to have a qualitative overlay: everything that is rules-based has to be questioned on a case-by-case basis,” she said.

“That doesn’t stop you from saying ‘I know the risk, I understand the risk, I’m willing to take it’. If you put ethics aside, it is about risk. And people have different levels of risk.”

But the rush from Russia shows that large investors often take decisions en masse rather than deviating too far from one another – particularly if they must make a moral judgement at a time when they are expected to 'do the right thing’. That suggests reactive rather than proactive approaches could remain the norm.

Here, too, sustainable investors are caught between two poles. Those who assess political risk in an idiosyncratic way would strengthen another common industry criticism: that ESG labels are rendered less meaningful, or even meaningless, by the variety of approaches they encompass. ESG may be coming to terms with the energy transition, but it could soon find itself bogged down with an even thornier set of choices.