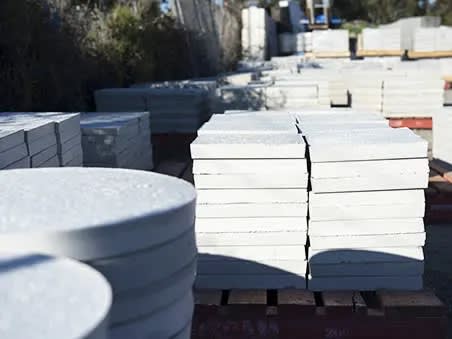 Company pays down debt and improves return on capital

The fact that many of us got out into the big, wide world again last year did no harm to the fortunes of Marshalls’ (MSLH). The company hailed “supportive” market conditions as sales moved above pre-pandemic levels, even though higher costs meant margins are yet to fully recover.

The “unusually high” levels of household income people built up during the pandemic meant a lot more spending on driveways and gardens. Marshalls' domestic division was its fastest growing, up 30 per cent year on year to £167mn, or 28 per cent of the total.

Work for public sector and commercial customers, which makes up two-thirds of sales, rose 26 per cent year on year and 4 per cent above pre-pandemic levels. Within this market, it is focusing on new-build housing and infrastructure work where “future demand is expected to be greatest”.

Higher costs were a downside as raw materials, shipping and staff costs increased – the latter to cover more overtime as the company faced labour shortages. Supply chain challenges also meant it had to spend more on inventory but less on capital expenditure as it delayed planned projects.

Its overall cash levels decreased, though, mainly because it paid down more than £120mn of borrowings. Year-end net debt stood at £41.1mn, from £75.6mn a year earlier. Adjusted return on capital employed jumped to 20.6 per cent, from 8.2 per cent.

Broker Shore Capital forecasts a 14 per cent uplift in earnings per share to 33.3p. The shares currently trade at 20 times this level, which isn’t prohibitive based on its own recent history, but doesn’t seem to offer huge upside potential barring acquisitions or other significant events. Hold.