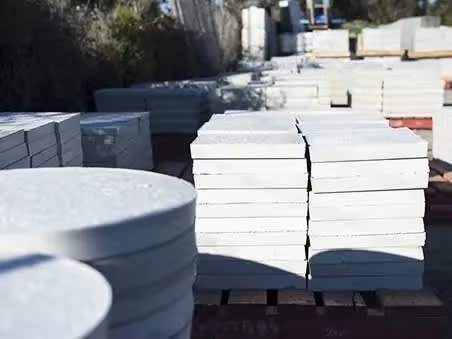 Block paving manufacturer Marshalls (MSLH) said sales to domestic customers dropped by 9 per cent in the first four months of the year to £52mn. Despite “strong” demand, a reduction in installer capacity as workers took more holidays than in 2021 when the UK remained in lockdown means order book periods have lengthened.

Overall sales grew by 5 per cent to £201mn as the company’s public sector and commercial arm reported a 12 per cent increase in revenue, underpinned by strong demand for new homes.

The demand picture has weakened slightly, though, with the Construction Products Association cutting its output growth forecast for the building materials sector to 2.8 per cent this year and 2.2 per cent next, from 4.3 per cent and 2.5 per cent, respectively, in January. The CPA cited rising inflation, commodity prices and energy costs – particularly following Russia's invasion of Ukraine – as reasons for what it called a "sharp revision downward".

Marshalls, which last week completed a £535mn acquisition of roofing tile maker Marley, said it remains confident that the input cost increases it faces can be passed on through the supply chain. Its shares fell by 9 per cent in trading on Wednesday morning.

A detailed look at Marshalls’ acquisition of Marley will feature in the Ideas section of this week’s Investors' Chronicle.