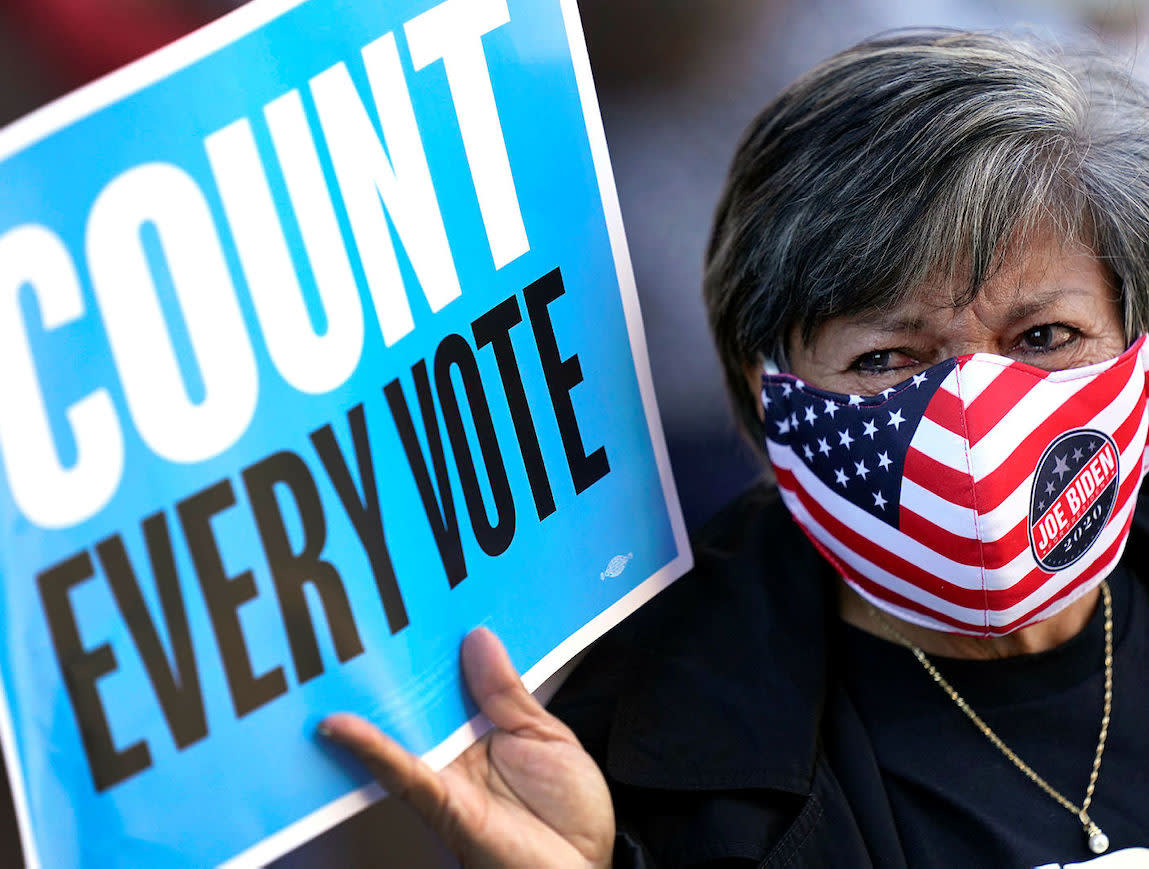 Business bears the brunt of US election chaos

Donald Trump has returned to the White House. Joe Biden has become the 46th US president. US votes are still being counted. Neither candidate is accepting defeat. Delete as applicable.

US election results counting has descended into chaos. Both candidates have claimed success – neither with much cause. Lawyers are gearing up to fight the results in four states. And still the outcome is having an impact on your money. Here is how.

The first task for the next occupant of the White House is to relieve America’s coronavirus woes, both socially and economically.

On the health and social front, Joe Biden is the preferred candidate. He is willing to lockdown states to prevent the virus from spreading further, wants to make free testing available for all, and plans to eliminate “all cost barriers to preventative care and treatment”. A keen advocate of the science behind mask wearing, Mr Biden has taken the health repercussions of Covid-19 more seriously than the 45th president – Donald Trump held mass rallies throughout his campaign and drove around in a car just a few days after being diagnosed with the virus.

But Mr Biden’s plans to relieve the economic woe that has befallen the US are less clear. He has proposed a further $2.2trn package of federal pandemic support, financed by rolling back corporate and income tax cuts and applying social security payroll tax for those earning over $400,000 a year. In October, estimates from Moody’s Analytics suggested that the gains from Biden’s proposed spending would outweigh the dampening effect of higher taxes. But markets don’t seem so sure – once the possibility of a ‘Blue Wave’ had been removed on election night, international stock markets rallied as the dollar strengthened, while ‘safe-haven’ assets including platinum and palladium suffered.

Without a convincing win or a Democratic-led senate, Mr Biden’s plans to ‘build back better’ through an infrastructure spending package led by green initiatives looks less likely to go ahead. Copper and aluminium miner shares fell as the results came in, as promises of a US-led renewables revolution took a hit. Still, Mr Biden is dedicated to the green cause and, with or without the backing of the Senate, he looks set to bring the US back into the Paris Climate Agreement.

US automobile manufacturers with an arm in the electric vehicle market – Tesla (US: TSLA) and Ford (US: F), for example – are more likely to thrive under a Biden administration than a Trump one.

The Democrat-controlled House of Representative has already dug its claws into the big US tech industry. Mr Biden’s running mate Kamala Harris wants to past the Pro Act – a reform bill which makes it harder for US companies – including many of those in Silicon Valley which have thrived in the Gig economy – to employ freelancers.

Donald Trump might be perceived as the ‘protectionist President’, but his trade policies suit Britain more than Biden’s do. The former vice-president is seeking to tighten his country’s relationship with Europe and an America firmly on the side of the Europeans is not likely to be helpful to the UK’s Brexit negotiations.

Under Donald Trump, trade negotiations have made good progress. UK/US trade is worth £220bn annually and the US levies around £451m a year in tariffs. For some industries, including automobiles, ceramics and Scotch Whisky, tariffs have been especially steep since Donald Trump launched into his nationalistic policies. But he is open to a trade deal. Just last month, Liz Truss, the secretary of state for international trade, said: “The UK is in a good position to move forward after the election.”

The outlook for Scotch Whisky isn’t all about tariffs. Drinks companies across Europe make a lot of money in the US and the generous corporate tax rates under Trump’s policies will help keep these businesses’ profits afloat. These companies will also benefit from the president’s plans to “open up” the economy as rapidly as possible. In the wake of the pandemic, Donald Trump wants to keep the economy alive by returning to normal as fast as possible.

That includes his outlook towards aerospace and defence (keep spending big) and healthcare (keep unwinding the Affordable Care Act). Neither policy is especially popular with the American people as the country recovers from a massive health crisis, but companies aren’t complaining.

Good for: Companies which make money in America

Bad for: Supply chains in China

Donald Trump is set to maintain his hard line against China, meaning companies which manufacture goods in China might have a hard time. Chinese companies are also on the hook for a difficult few years in America if Trump holds onto his presidency.

Prior to the election, Donald Trump and Joe Biden both announced that they would not concede until every vote has been counted. And perhaps not even then. Both parties have armies of lawyers waiting to contest close-fought states – Michigan, Wisconsin and Pennsylvania look likely to be the most controversial results.

The US hasn’t endured a contested election since November 2000, when a painfully close result in Florida resulted in a month long legal battle between candidates George Bush and Al Gore. The Republican ended up winning the state by just 537 votes.

There is little doubt that a contested election would be the worst-case scenario for global markets, which don’t like uncertainty. The Bush-Gore saga saw markets sell off by 8 per cent, although it should be noted that this came amid the dot com bust. Still, the prospect of a long legal battle and policy decisions on hold might be the last straw for stretched financial markets. European leaders are warning of a descent into chaos – that’s not what the world needs as it fights off a second wave of coronavirus.

Chaos is good news for the parts of the market which thrive off volatility. In the UK, spread betters such as IG (IGG), CMC Markets (CMCX) and Plus 500 (PLUS) could benefit from the confusion surrounding a long drawn out result.

Uncertainty has a negative impact on confidence and nothing hits the banking sector like a crisis of confidence. At a time when the threat of negative interest rates is adding pressure, US and European banks could do without a contested election.

Divided administration: could paralysis be best?

If Biden wins the presidency but fails to take hold of the Senate, he will find it impossible to push policies and enact real change. It’s the same fate which befell Trump when he was first elected president – a Democrat-held Senate made policy-making almost impossible. Ian Bremmer, president of Eurasia Group, a geopolitical risk think tank says this scenario poses a major problem: “the single most negative thing that comes out for me over the short-term is that the ability to do a several-trillion-dollar stimulus in the next year has dropped to almost nothing,” he said.

But, for now, maybe paralysis is what America needs. Four years of Donald Trump has been wearing for the US people and has contributed to civil unrest and bipartisanship. But Biden doesn’t inspire confidence or the prospect of economic recovery. The greatest assets of both candidates are the others’ failings – hardly a stellar reference for the next leader of the free world. Perhaps an America where neither party has full control is the best it can hope for.