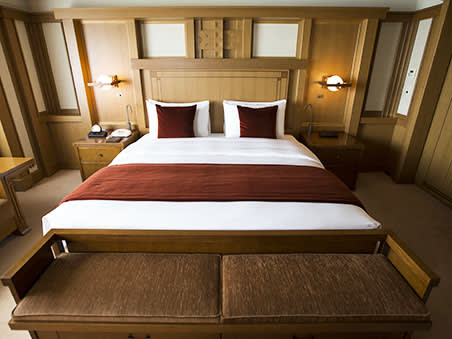 Dalata Hotel Group (DAL) historically focused on the Irish market, but in recent years has expanded its presence into the UK. Indeed, of the 2,400 rooms in the pipeline, most will be opened in the UK. Deputy chief executive Dermot Crowley was pleased with the UK’s performance during the first half, when four of the six cities in which it operates outperformed the wider market. Analysts at Berenberg agree, calling the 3.2 per cent like-for-like growth in revenue per available room “impressive” in light of a subdued market. Mr Crowley attributed this performance to Dalata’s focus on major cities, which benefit from corporate stays, in addition to leisure travel, and the fact that the average age of its rooms is much lower than competitors.

Management remains committed to paying out between 20 per cent and 30 per cent of after-tax profits after it initiated dividend payments last year. Last year it paid out 25 per cent of profits, but this could creep higher this year due to the impact of IFRS accounting changes. These payments continue to be supported by cash generation, which increased to €45.1m (£41m) from €31.4m this time last year.

Dalata’s occupancy rate remained relatively flat over the period at 80.2 per cent, although it increased marginally on a like-for-like basis, with the average room rate slightly higher at €110.30. This suggests that the 1,400 new rooms opened over the past 18 months haven't come at the expense of existing locations. It's worth noting that the €46.3m upward property revaluation won’t impact the terms of Dalata’s debt financing, as it is currently secured up to 2024. Buy.