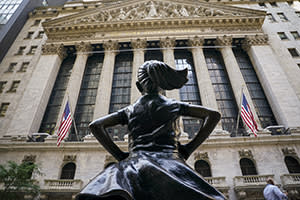 Pullback expected as FTSE 100 makes post-pandemic high, and US CPI data due today

Stock markets around Europe rose after an upbeat session on Wall Street driven by a recovery in tech stocks as the rise in bond yields eased. Fed chair Jay Powell offered reassurance in his reappointment hearing, though he talked about the possibility of raising rates faster than expected if inflation remains persistent. All eyes on today’s US CPI print – expected at another 40-year high.

The FTSE 100 had been tracing out a neat new range this year but this morning it’s managed to break free and make a new post-pandemic high at 7,545. The positive march means 7,700 remains the target – the old pre-pandemic peak in January 2020. Up 8 per cent since the November low, the move might just be running out of gas – RSI starting to look overbought, MACD a tad stretched though the bullish crossover is still in play. 7,400 is the floor for now – any pullbacks likely to be bid here.

Megacap tech bounced back to flatter the major US indices. What drags the most on the way down will also do the heaviest lifting on the way up. The Nasdaq rallied 1.4 per cent, while the S&P 500 rose 0.9 per cent. The rip in bond yields eased – the US 10-year back under 1.75 per cent. Some of the trashier, spec-tech, loss-making corners also got pulled up – ARKK rallied almost 3 per cent, though it remains more than -10 per cent YTD.

Speaking at his Senate banking committee confirmation hearing, Powell said the Fed would not shy away from raising rates more than forecast. He also suggested balance sheet run-off decision would be worked through in the next 2-4 meetings – implying QT could start in June. Regional Fed presidents Mester and Bostic were also on the wires backing a hike in March. None of this is new – we know the Fed is in tightening mode now. The question lingers none on what the Fed’s position is right now, but what it might end up doing should inflation persist.

On that.. US CPI inflation is due today at 13:30 GMT. Expect a print above 7 per cent, with the month-on-month increase expected at +0.5 per cent (core +0.4 per cent). Markets will be especially focused on signs of peaking – don't bet on that happening soon. As repeated several times here, inflation pressures are broadening and becoming more entrenched. The Fed is still chasing and not on top.

The dollar was softer yesterday on the Powell comments and yields eased back. GBPUSD made the move above 1.36 stick and can look up the channel to 1.38 next.

US bank earnings kick off Friday – looking for the Wall Street beasts to post a record-breaking year for profits. 2021 was defined really by two things – the release of loan loss provisions flattering the bottom line, and surging investment banking revenues. No one is really going to pay too much attention to the figures for the last quarter - we know they’ll be good; the focus is now on how banks do as the Fed starts to tighten policy. Rate hikes this year should foster higher net interest income and margins from banks’ core lending activity. So, we could see 2022 mark a period of lower bottom line profits but growing core revenues from lending. Fed figures indicate lending is picking up – as long as the Fed doesn’t go too big too fast (inflation this week could see another bumpy ride for bonds). GS were out Monday with a prediction for 4 hikes this year, up from 3... consensus for more hikes is mainly +ve for bank stocks. Piper Sandler yesterday said that Bank of America (BAC) is the large cap bank to own in 2022 – which fits if the year is about a rise in core lending revenues as it has the biggest national footprint.

In London this morning, Sainsbury’s (SBRY) shares rose 2 per cent after the supermarket group raised its full-year profit guidance after a very good Christmas. For the year to March, SBRY expects to deliver underlying pre-tax profits of £720m, up from £660m in prior guidance. General merchandise – Argos – and the bank performed well. Cost savings and higher volumes are offsetting higher operating inflation and competitive pressures, aka matching discounters on price (see Aldi this week).

Meanwhile Whitbread (WTB) shares were steady after it reported a solid Q3 marked by ‘resilience’ to Omicron. Total UK sales rose 3.1 per cent vs last year, but lockdowns are wrecking German occupancy rates, which have declined to 36 per cent in the last 6 weeks from 60 per cent in the third quarter. Tough gig until more corporate travel returns and weddings, stags/hens really pick up properly.

Dunelm Group (DNLM) jumped 5 per cent after yet another strong showing: Total sales of £407m in the second quarter were up £46m compared to FY21 and £84m compared to FY20. Gross margin in the second quarter increased by 160bps compared to the same period last year, ahead of expectations, driven by higher full price sell through of seasonal ranges. Outlook also good: management expects profit before tax (PBT) for the first half to be approximately £140m, up from £112m last year and £84m in 2020. And they say that absent any significant Covid-related disruption, they expect that full year FY22 PBT will now be materially ahead of market expectations, which was about £180m.

Shares in Savills (SVS) and M Winkworth (WINK) popped this morning after the estate agent groups separately reported a frantic finish to 2021.

Savills, the FTSE 250 outfit with operations around the globe, said busy trading – particularly in the UK and Asia Pacific – resulted in an “extraordinarily strong” end to the year and that full-year underlying profits are expected to be “very significantly ahead” of the upper end of forecasts. According to FactSet, pre-tax profit forecasts for 2021 ranged between £139m and £195m.

However, the group cautioned that inflationary pressures, and “normalised” discretionary costs would suppress commercial transaction volumes and moderate activity in the UK residential market.

Meanwhile, Aim-listed real estate franchisor Winkworth expects a “good outlook for sales and an improved rental market in London”, after 2021 sales climbed 13 per cent on the prior year and 42 per cent on 2019. Its shares are up 9 per cent in early trading.

Vistry (VTY) has said it is “supportive of the government's ambition to derive a solution” to the cladding crisis, two days after its shares – and those of its peers – fell following a pledge by housing secretary Michael Gove to press the sector to cough up an extra £4bn to help fix the cladding crisis.

The housebuilder said it would update the market “on any implications for the group as these suggestions evolve into clear proposals” and remains “committed to meeting any liability which we identify”.

But a scheduled trading update showed little sign that earnings are about to take a material hit anytime soon. Full-year adjusted pre-tax profits for 2021 are expected to come in at £345m, in line with previous guidance, while executives now forecast a “significant step up” in profits and returns in 2022 – including the possibility of a share buyback or special dividend.

Meanwhile, shares in Cairn Homes (CRN) jumped 10 per cent after the Dublin-focused housebuilder reported its strongest ever performance for house sales and cash generation and pledged to buy back up to €75m of shares alongside a final dividend of €20m this year.

The placing is being offered to both institutional shareholders and retail investors via a conditional offer on the PrimaryBid platform. At 110p a share, the offer has been priced at a 1.8 per cent discount to yesterday’s closing mid-price, and a 4 per cent premium to ASLI’s last reported sterling-denominated net asset value per share of 105.8p.

Though a target has not been set, the investment manager recently acquired a €227m logistics portfolio in Madrid following an oversubscribed £125m equity raise in September. The new subscription will be put toward final payments for the Madrid assets, as well as a pipeline of deals in France and the Netherlands.

The market has lost faith with Frontier Developments (FDEV). In November, it issued a sales warning off the back of an underwhelming performance from its new Jurassic World Game. Earlier in the year it also released Elite Dangerous: Odyssey, a game beset with glitches which the CEO David Braben had to apologise for. The consequence of these mistakes is that it has now swung into loss making territory.

In the interim results this morning, revenue was up 33 per cent, however this wasn’t enough to offset the increase in costs associated with developing the games. In the six months to the end of November last year, it had an operating loss of £1.3m, having made an operating profit of £6.9m the year before.

The other concern is that the highly anticipated release of the Warhammer Age of Sigmar game has now been pushed back into FY24. There is a strong pipeline of games but when you consider the issues that beset Elite Dangerous: Odyssey, it seems Frontier doesn’t have the capacity to develop on time and to the quality the market expects.

The board have narrowed the revenue guidance for FY2022 to between £100m and £120m. In November, the consensus forecast complied by FactSet was £140m.

This example is a good case study in the issue with investing in video game developers. Just before the Jurassic World Game was released, we saw the game as a bull point in the Investment Ideas section. The franchise had had success and we didn’t see any reason for this to change. However, the game underperformed due to competition from other “highly anticipated” titles being released at the same time.

Game development is expensive and the rewards are never a guarantee. It will take a while and a few successful releases for Frontier to win the market’s trust back. AS