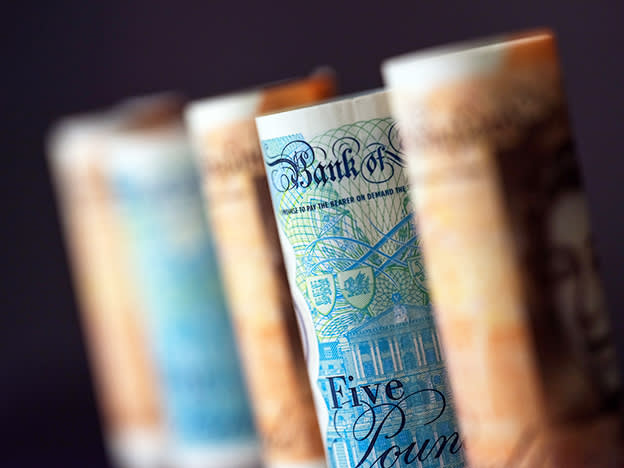 With more than £2.9bn-worth of dividend cuts made so far, Alex Newman hunts for income survivors

Plummeting share prices cause pain to portfolios. But for investors with long-term horizons, reinvesting the regular income provided by company dividends usually serves as protection against short-term storms while a stock’s value recovers. And even if shareholder returns are cut or rebased, a balanced share portfolio (or dividend-focused investment trusts or tracker funds) should still provide some yield, especially for those in retirement and reliant on dividend income. With yield comes that most precious commodity in today’s financial markets: cash.

That’s the theory, at least. But amid the growing corporate crisis, the ordinary income safety net is already starting to fray. Facing unprecedented threats to cash flow and demand, companies are cancelling or suspending their dividends en masse. In recent weeks, more than 30 UK-listed companies with annual dividends of at least £10m have cut, suspended or decided to review their distributions to shareholders. By our calculations, this already amounts to more than £2.9bn of dividend cuts from the FTSE 350 alone.

Some of the names in the list should not be a surprise. Prior to announcing their dividend cuts, shares in FTSE 350 names including Elementis (ELM) and Marston’s (MARS) had been yielding more than 20 per cent, based on last year’s payout. While there are some stocks with yields in double figures that may escape a near-term cut, it is simply over-optimistic to expect a company to give away more than a fifth of its market value in one year. After all, a dividend yield above 6 per cent was probably considered dicey as recently as February.

By the time this piece is published, several larger dividends are likely to be on the cutting room floor, as finance teams scrabble to rein in any unnecessary drains on cash in the weeks and months ahead. Even supermarket group WM Morrison (MRW) – a potential beneficiary of the current crisis – suspended the payment of its special dividend when it published preliminary results last week, opting instead to retain “maximum future flexibility” around its use of cash flow – which is reportedly very strong.

Otherwise, the cuts have been justified in various ways. Last week, bookmaker William Hill (WMH) cited “the present circumstances” when it suspended its dividend until further notice. With sporting events effectively cancelled for the year, that position is understandable. But in truth a combination of tax and regulatory issues – alongside the limited success of the group’s push into the US – means shareholder distributions have long been unsustainably high. “Coronavirus has simply been the nail in the coffin,” reckons Canaccord Genuity equity analyst Simon McGarry.

Then there are examples of extreme caution, such as Micro Focus’s (MCRO) decision to withdraw its proposed 58.33¢ per share final dividend for its October 2019 year end. Justifying the decision last week, the enterprise software giant said that while the Covid-19 outbreak had had “no material impact….on business to date”, the unknown hit to the global economy had reduced the group’s risk appetite. This was done despite strong recurring cash flows and more than $600m (£519m) of cash on hand at the end of February. A second interim dividend for FY2019 is still being considered, if a clearer picture starts to emerge.

While some companies are cutting dividends to boost the resilience of their future cash flows, others already have no choice. One big name in this latter category is Intercontinental Hotels Group (IHG), which expects government restrictions on travel and social contact to have contributed to a 60 per cent crash in revenue per available room in March alone.

With earnings visibility clouded indefinitely, attention has immediately turned to the hotel chain’s debt commitments. A $1.4bn revolving credit facility may be largely undrawn, and a staggered bond maturity profile might provide breathing space. But the 85.9¢ final dividend announced last month – equal to a payout of $150m – is clearly an unaffordable luxury. IHG management has also deferred the consideration of future distributions “until visibility has improved”. How long this dividend holiday will last is therefore anyone’s guess.

On the flipside, several high-profile cuts have been met by share price rises, as investors cheer on efforts to preserve cash as soon as possible. The longer-term impact on shareholder confidence is less quantifiable, however. “Decisions to cut or delay dividend payments won’t be taken lightly by management teams, showing how serious the hit to economic growth and company profits could be,” comments AJ Bell investment director Russ Mould. “The longer the viral outbreak lasts, the stronger the possibility that more companies will feel the need to take the same money-saving action.”

Cuts to date, re-sets to come?

So far, most of these decisions appear to have been binary. In short, companies have completely cut, rather than lowered their distribution commitments. For larger companies with shareholder registers highly reliant on dividends, that may be a harder call.

Unfortunately for all investors, it is equally difficult to quantify what market expectations might be. In many cases, it appears analysts have been either slow to react, or simply unable to re-set their near-term predictions for shareholder distributions. The consensus forecast for Barclays (BARC), for example, is for dividends to rise from 9p to 9.6p per share in 2020, which would imply a yield of 10.7 per cent at the current price.

At the start of this week, the FTSE 100 Index was expected to yield 6.4 per cent, which looks artificially high. Consensus data compiled by AJ Bell also suggests dividend forecasts for 2019 and 2020 are still wildly optimistic.

Unfortunately, looking at stocks’ trailing yields – based on the amount paid out in the past 12 months against their current market capitalisations – is equally deceptive. Among the FTSE 100 constituents that paid out at least £2bn in 2019, several – including Royal Dutch Shell (RDSB) and Lloyds Banking Group (LLOY) – engaged in share buyback programmes in the past year, which again skews the yield reference point.

In aggregate, we would expect these payouts to decline in 2020, although we do not yet expect any of the names above to cancel dividends. Following the crash in commodity prices five years ago, miners including BHP (BHP) and Rio Tinto (RIO) shifted away from progressive shareholder returns to more flexible policies. Bank stocks such as Lloyds and HBSC (HSBA) have structured their returns to ‘top up’ dividends through one-off specials or share buybacks, while supermajors such as BP (BP.) are more likely to ride out a battered oil market with spending cuts (see box).

Smaller names may not be quite so resilient. In recent weeks, analysts at Canaccord Genuity have added several stocks to its list of ‘shaky dividends’, which the brokerage defines as having a yield above 3 per cent, dividend cover below 1.7, negative earnings growth in the prior and current financial years, falling cash flow and net debt higher than cash profits.

These include tobacco giant Imperial Brands (IMB), whose sales could come under renewed pressure amid a global respiratory health crisis. Other groups in this category include advertising company WPP (WPP), which is likely to suffer from a sharp pullback in clients’ marketing activities, shopping centre owner Hammerson (HMSO) and commodities outfit Glencore (GLEN), which is more indebted than its mining peers and is suffering due to severe drops in the price of copper, coal and cobalt.

To these, we had initially considered adding the housebuilders (see table below), which until Monday made up four of the five FTSE 350 constituents with a net cash position, forecast earnings growth, a dividend cover of at least two, and a trailing dividend yield above 3 per cent. However, even this cashed-up sector has joined the list of cutters. On Tuesday, citing efforts to preserve cash and retain as much flexibility in the business as possible, both Taylor Wimpey (TW.) and Redrow (RDW) pulled their distributions, removing another £522m of investors' expected income.

For investors looking to safeguard their portfolio’s income, but wary of the binary risks of dividend cuts, the retail bond market could offer some hope.

Like wider credit markets, retail bonds have taken a pounding in recent weeks. So much so that you can currently find bonds in financial giants including Aviva (AV.) and Standard Chartered (STAN) priced at a discount to par. That’s the bond market’s way of saying that these companies’ debts are at risk, despite the large regulatory capital buffers both banks and insurers are required to hold. Time will tell if the Covid-19 crisis starts to bring down massive financial names, but we rather think some prices reflect some sellers’ desperate lunge for cash.

Indeed, the pricing signals look inconsistent. For example, it is worth comparing the aforementioned Aviva bond to the one offered by peer Prudential, which trades at a 13 per cent premium. Elsewhere, bond buyers appear to think buy-to-let specialist Paragon Banking Group (PAG) will default on its bonds maturing in 2022 and 2024, despite the lender possessing a common equity tier one ratio of 14.2 per cent – more than three times the Basel II regulatory minimum. We personally doubt the Bank of England would let a significant lender go to the wall in the coming months.

If investors can navigate the market’s liquidity issues, we think there are bargains to be had.

Following the recent collapse in oil prices, the chunky dividends of supermajors Royal Dutch Shell (RDSB) and BP (BP.) are once again in the spotlight. And with payouts forecast to provide around a fifth of the FTSE 100’s cash dividends in 2020, these two income streams also matter a great deal to investor portfolios.

Partly for this reason, we expect the current crisis would need to persist until 2021 before the income stalwarts consider cuts to their cash distributions.

This week, Shell told investors it could offer “no assurance… future dividend payments will match or exceed previous dividend payments”. But it is also worth noting that the Anglo-Dutch company has weathered plenty of crises in its history, and has escaped a dividend cut since the Second World War. Save for the Deepwater Horizon catastrophe, which resulted in a temporary suspension of dividends, BP has an equally strong record.

In the longer term, there are profound questions around the business of fossil fuel production in an era of climate change. Over the coming decade, that will increasingly put dividends under pressure.

But the current income crisis is squarely focused on 2020. And despite considerable pressures on both supply and demand, oil and gas producers have a few tricks up their sleeves. For one, while much of the hydrocarbons they pump are now lossmaking, there is still a market for their product. That means Shell and BP will continue to generate cash, which is more than many consumer-facing businesses can currently claim.

Secondly, the oil majors can defer large capital commitments. This week, Shell said it would cut at least $5bn from this year’s planned capital expenditure, and trim operating costs by between $3bn and $4bn.

Third, and most important, are the fundamentals of the oil market. At current prices, a huge slug of the industry is now losing money and will soon have to halve production; this, after all, is the reason why Saudi Arabia and Russia have abandoned their previous agreement to cap supply. While BP and Shell are not immune to this pain, they have the balance sheets and bank support to continue paying out for now.

“Dividends will clearly be pressured, but we do not expect either of the companies to cut the dividend in 2020 even if oil prices average $45 per barrel, as they have the capacity to pay dividends from the balance sheet for a while,” wrote analysts at Berenberg in a recent note to clients.