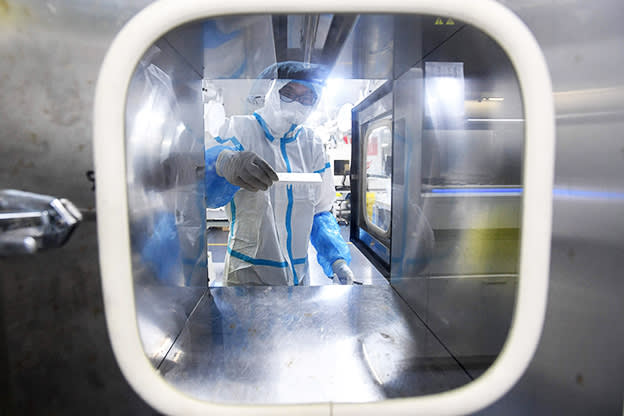 Medical devices constitute a large and competitive market, but the Dublin-headquartered group arguably has the scale and investment power to fight its corner

As Covid-19 swept across the globe during spring last year, hospitals were forced to redirect their resources towards the front line of the pandemic. The upshot was that many non-urgent treatments were postponed or cancelled – creating enormous waiting lists. In England alone, 5.1m people were waiting to start treatment at the end of April 2021 – something the British Medical Association called the "strongest indicator yet that the immense backlog of care is dangerously close to crippling our health service”.

It will take time to resolve such acute strain. Yet even then, the situation is unlikely to return to normal. Ageing populations and the rising prevalence of chronic illness the developed world over mean that demand for healthcare is only going to increase. An estimated 727m people around the world were aged 65 or over in 2020, according to the United Nations. By 2050, that number is projected to more than double to over 1.5bn. Look at it another way – one in six people worldwide will be of pensioner age by the middle of this century. Small wonder that national healthcare spending in the US is expected to rise at an average annual rate of 5.4 per cent to $6.2tn (£4.5tn) by 2038 – faster than the pace of gross domestic product growth.

While those trends will put pressure on health systems, they bode well for Medtronic (US:MDT). The medical devices group was hit by a slowdown in routine procedures early in the coronavirus crisis but has since shown signs of recovery.

Medtronic came into being 72 years ago when its co-founder invented the battery-powered pacemaker. Today, it is one of the world’s largest specialists in what it does – making cardiac devices, cranial and spine robotics, insulin pumps, surgical tools and patient monitoring systems, among other products for the treatment of 70 health conditions. Medtronic's shares are listed in New York but it is legally headquartered in Dublin, having acquired Ireland-based Covidien in 2015 in a tax inversion deal.

Medtronic’s products are used in hospitals, surgical centres and alternate care facilities. Giving a sense of its scale, the group says its therapies help 72m people every year across 150 countries.

Now, with a relatively new chief executive at the helm and aided by a refreshed operating model, Medtronic looks set to take advantage of beneficial demographic shifts after a period of underperforming its ‘medtech’ peers. Attributing such underperformance to “inconsistent results and below-peer growth”, bullish brokerage Stifel reckons that the new boss, Geoff Martha, is “in the early stages of enacting real, positive change at Medtronic”.

With the introduction of a new business structure in February, Medtronic replaced four ‘groups’ within its organisation with 20 decentralised operating units. This move was made to take out “excess layers” and allow its individual divisions to be more agile, Medtronic said at an investor event last autumn. “We’re getting leaner and more nimble,” it added, “increasing the speed of our decision-making, our execution and our innovation”.

But the leanness of its operations has not limited diversification. Medtronic comprises four specialist areas with their own market opportunities. The largest portfolio by sales is cardiovascular, selling products for cardiac surgery and associated procedures, such as cardiac catheters. The group also has a medical surgical portfolio, a neuroscience portfolio and a diabetes operating unit. Its devices include implantable pacemakers, advanced stapling products for surgery, absorbable mesh devices to fix hernias and capsule endoscopy systems for gastrointestinal investigation.

By geography, Medtronic’s largest market (with 52 per cent of annual sales) is the US. Non-American developed markets constitute just under a third of revenues. And, while emerging markets bring up the rear, management believes there is much more room to grow in such regions.

Pre-pandemic, Medtronic achieved 5.5 per cent revenue growth in the year to end April 2019 and a 1.2 percentage point improvement in its adjusted operating margin. But then Covid arrived, prompting a hiatus in non-urgent medical appointments. Sales for the final quarter of 2019-20 slipped 26 per cent to $6bn, followed by a drop of 13 per cent in the first quarter of 2020-21. However, as some level of normality returned, sales shot up almost two-fifths to $8.2bn in the final quarter of 2020-21. Martha cited a recovery with most of the group’s markets “returning to near normal”.

Admittedly, the company cannot predict the course of the virus. Several countries have had to reimpose restrictions in recent weeks as new variants wreak havoc with their staged reopenings. Even as it spoke of more positive signs in its 2021 annual report, Medtronic flagged that Covid could continue to affect “significant aspects” of its operations, including product demand, supply chains and distribution.

Yet there is cause for encouragement in the group’s longer-term ambitions. Last year, it raised its long-term annual organic revenue growth target to 5 per cent-plus, from a previous projection of 4 per cent. Management simultaneously guided to 8 per cent compound annual growth in EPS and said it expected to turn at least 80 per cent of operating profits into cash for shareholders.

Supporting that sense of confidence, Medtronic has repeatedly lifted its dividend. An uptick of 9 per cent to $0.63 for the first quarter of 2021-22 marked the company’s 44th consecutive year of increases. It also marked a 47 per cent improvement in the dividend per share over five years and kept Medtronic firmly in the S&P 500’s ‘Dividend Aristocrats’ list of companies that have raised payouts consistently for 25 years.

That said, readers should note that it isn’t always straightforward for UK investors to access dividends owed them by US companies (and in this case an Irish company listed in the US) because of the need to claim back withholding tax.

Medical devices are designed and sold by various companies large and small around the world, making for a highly competitive market. Exacerbating that competition, Medtronic faces pressure from government agencies attempting to limit healthcare costs – an issue which in turn has spurred hospitals to minimise their own expenditure through more effective buying programmes. A saturated market also means Medtronic needs to protect its existing products; something it is already doing, with more than 49,000 patents in its portfolio.

Competition also puts greater onus on Medtronic to innovate and bolster its pipeline. It spends $2.5bn every year on research and development (R&D) – equivalent to 8 per cent of revenues ($30.1bn) in 2020-21. For 2021-22, management plans to up that expenditure by more than a tenth – its biggest-ever dollar lift in R&D spend.

One area in which Medtronic is investing is renal denervation, which it hopes will expand its presence in the multi-billion-dollar addressable market of hypertension. It also recently received approval in the US for its ‘Harmony’ transcatheter pulmonary valve for patients with congenital heart disease.

Meanwhile, Medtronic has been focusing increasingly on surgical robotics – a specialism pioneered by Intuitive Surgical (US:SURG), whose shares are another IC idea. Despite Intuitive’s dominance, there is arguably room for Medtronic to grow in a market still in its infancy. Demonstrating progress here, Medtronic is generating its first revenues outside the US from placements of its ‘Hugo’ robotic-assisted surgery platform.

Medtronic’s shares trade on a forward price/earnings multiple of 21 times; slightly lower than competitors Boston Scientific (US:BSX) and Stryker (US:SKY) and well below Intuitive’s multiple of roughly 60. True, their price has risen more than a third in the past 12 months alone; even so, analysts at investment bank JP Morgan believe new management’s strategy could help to “close the valuation gap” between the company and higher-growth peers.

All reasons, perhaps, why the group features in the IC’s list of fund managers’ favourite health stocks.