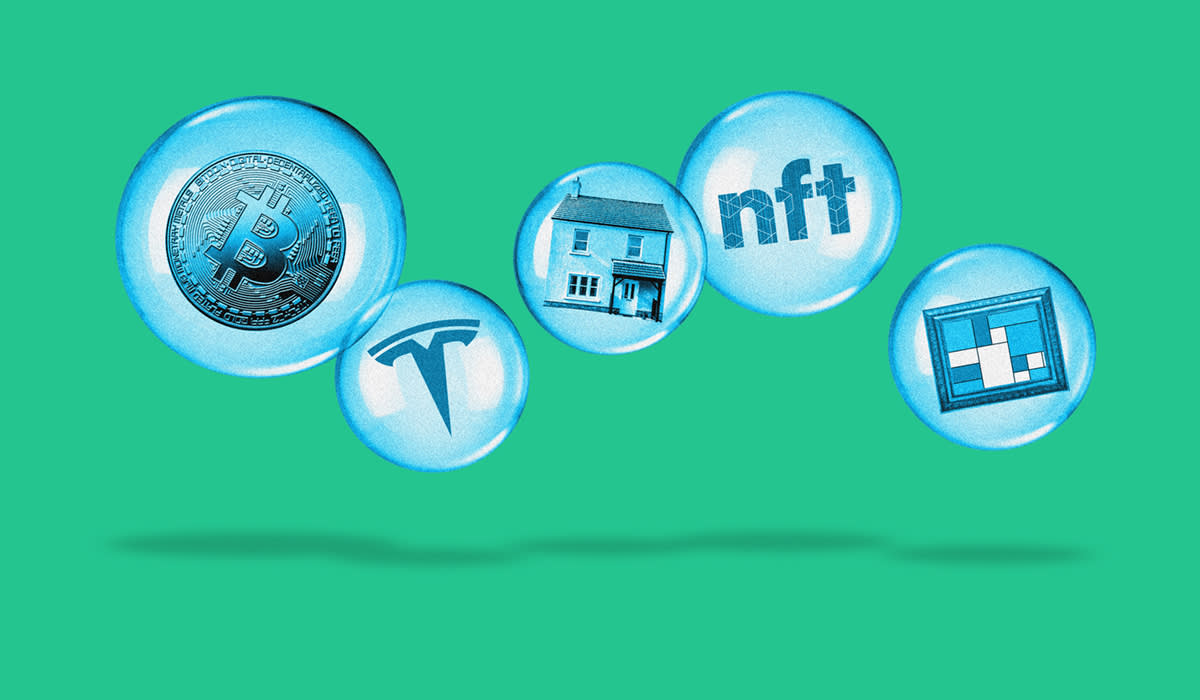 Are global stock markets in a bubble?

What evidence can we find of irrational markets and how should investors react?

Let me paint you a couple of pictures.

Scenario number one. The year is 2025 and a graduate financial journalist on a training programme has pitched a story to his editors: lessons from the 2021 stock market crash. He’s hoping to make a good impression with this story, permanent jobs have been thin on the ground for new graduates since the economy tanked. Digging through the archives throws up plenty of juicy content: overhyped ‘ethical’ stocks, a flurry of tech-focused IPOs among companies with no hope of profits, bitcoin-mania and social media speculation. ‘How did they not see this crash coming?’ he wonders.

Scenario number two. A 25-year-old millionaire has just bought a Tesla using bitcoin. “It’s funny”, he thinks, “this bitcoin cost £500 just five years ago, now in 2025 it has bought me the latest Model 3.” The millionaire never went to university – why bother when you can make your money creating valuable digital assets with non-fungible tokens? He’s thinking of floating one of his many digital platforms on the stock market – maybe he’ll assess potential investors’ appetite for it in Roblox later?

In early 2021, both scenarios are plausible. US stock markets are hitting new highs daily and even traditionally risk-averse UK investors have started to gain an appetite for hot tech IPOs – the lows of the Covid-19 sell-off (23 March 2020) have become a blip in the market’s relentless march upwards. Meanwhile, a herd of new (mostly younger, mostly male) investors have charged into stocks, helped by the ease and low cost of new investment platforms. And the same excited new investors have been joined in the bitcoin market by reputable investors and large companies.

What is a bubble?

Speculative frenzy in asset prices which inflates the price of that asset beyond all reason. If the frenzy occurs in equities it is called a stock market bubble, but bubbles can occur in any asset, from property to tulips.

And so, questions are rightly being asked about how long the surge can continue.

The problem with bubbles is that they are impossible to judge at the time. We can learn from bubbles gone by: markets tend to fail in much the same way time and time again and there are often similarities to be found in previous periods of turbulence. But if even Isaac Newton couldn’t spot ‘the original bubble’ of the South Sea. What hope do the rest of us have?

Lessons from bubbles gone by

It’s hardly surprising that bubbles are hard to judge. Stock market movements reflect the minds of investors – who are a notoriously tricky group to understand. Indeed, in the wake of the South Sea collapse Newton reportedly bemoaned his poor fortune: “I can calculate the motions of heavenly bodies but not the minds of men,” he said. And the minds of men mess with their investments, which has a big impact on the stock market.

If truth be told, global stock markets are probably in bubble territory – or heading towards it at the very least. So there are two key questions investors must ask: what stage of the bubble are we at; and what is likely to cause the bubble to burst?

To answer both those questions we can look at the areas of investment that are behaving irrationally.

The number of companies and funds seeking good ‘ethical’ credentials has surged in the past few years. There’s a simple reason for that: present good ESG (environmental, social and governance) scores and you are more likely to be noticed by the rising number of investors who declare good ethics is almost as important as good performance. And when one of those do-good investors is the chief executive of the world’s biggest fund manager (Larry Fink of BlackRock is a big advocate of responsible investing), ESG really matters.

As for the companies that are actually investing in products that could make a difference to the long-term health of our planet, investors can’t get enough. Tesla is helping fix our electric vehicle issues; Ørsted is producing the energy to cleanly power our cities; Beyond Meat will solve the world’s meat crisis. These companies all trade on valuations that are unfathomable to traditional stockpickers.

Sure, some of these companies are making a real difference to the world’s biggest social and environmental problems and these may have a bright future. But the broad brush of ESG captures the bad as well as the good. When the tide washes out, many companies’ and funds’ ESG credentials will be shown to be little more than window dressing.

Why pensions have an ESG problem

Which letters matter the most in ESG?

Taking an established industry and attempting to drag it into the digital age by creating an app is not innovation. Uber has not revolutionised the taxi service (we still pay drivers to take us home), Deliveroo has not fundamentally altered food (chefs cook, we eat) and WeWork has certainly not changed the office rental market (people go to work in a building with computers and water coolers in).

That makes all these companies different to Amazon – the frequent justification for not having to worry about profits among newly listed ‘tech’ companies.

Though newly listed, many of these app-makers have been around for more than 10 years and have still not made significant headway towards profits. It is likely that they never will, but will simply continue to guzzle cash until they reach the bottom of their backers’ pockets. Amazon hasn’t relied on frequent fundraisings to grow to the beast of a business it is today. It generated cash from day one and then reinvested that cash into building its operations.

What’s more, the newly listed ‘tech’ companies are already battling regulation (something Amazon managed to avoid for almost 20 years). They do not deserve their current valuations and once the markets realise this, the facade will crumble.

Blank cheque IPOs are back

Over the hill: Can a listings shake up boost London’s prospects?

The trick of trading IPOs

Bitcoin: Fear of missing out

When bitcoin fell from its 2018 highs of $20,000, investors who had steered clear of the surge into the cryptocurrency were smug: of course the run was going to end eventually!

Those smug investors are now feeling nervous: have they missed out again? A single bitcoin is now worth over $55,000 and as more and more reputable investors join the party, FOMO – fear of missing out – is rife. The fact that bitcoin can now be used as a payment method for a variety of goods and services (including a Tesla) and is being accepted by all three of the world’s major payments providers (Visa, Mastercard and PayPal) has added to the fear.

But FOMO is not a reason for investing. Bitcoin and other cryptocurrencies are far more established than they were during the first price boom, but there is still no rationale to its value. Bubble territory.

The beginners guide to bitcoin

Still not sure about what bitcoin actually is or how it works? You are not alone. Our complete guide to bitcoin and other cryptocurrencies can help you understand.

The rise in platforms and apps means investing has become easier, cheaper and more fun. And that is unquestionably a good thing. But a revolution in investing technology has not happened at the same time as a revolution in education, which means hoards of new investors are being welcomed to the stock market with little more than the questionable advice of message boards and social media.

The fact that this has happened at the same time as a global pandemic which has seen nations locked down and savings accumulate has exacerbated the problem.

Lessons from history: how a sharedealing revolution happened

Fiscal stimulus has kept markets growing even when they shouldn’t. Passive funds have boosted that effect – they invest more in the largest companies in an index which makes them larger. But when that virtuous circle comes to an end the unravelling of the system that has propped up markets for years could cause a very big crash indeed.